The Tipperary team to face Longford this Sunday in Glennon Brothers Pearse Park at 14:30 has been named 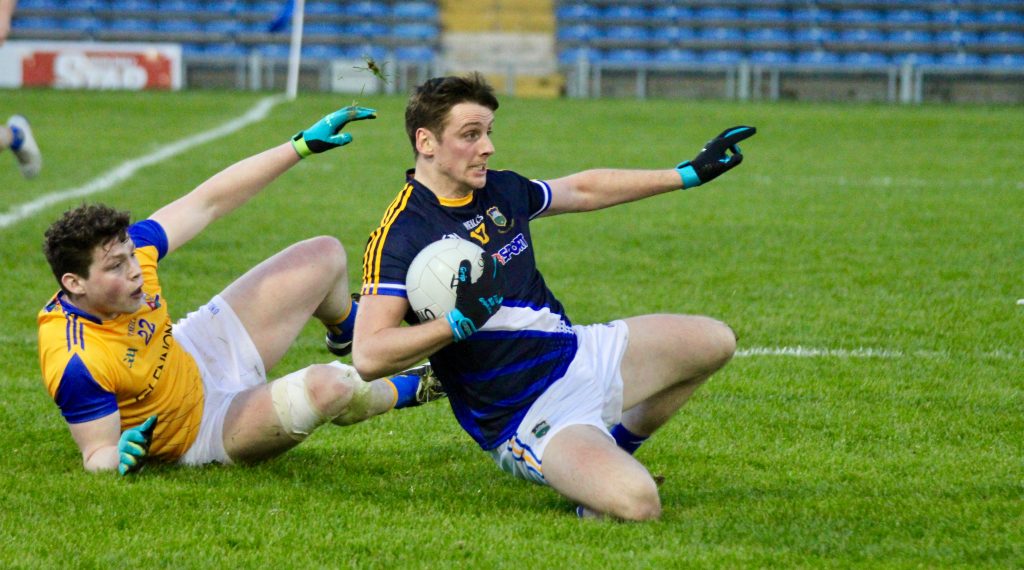 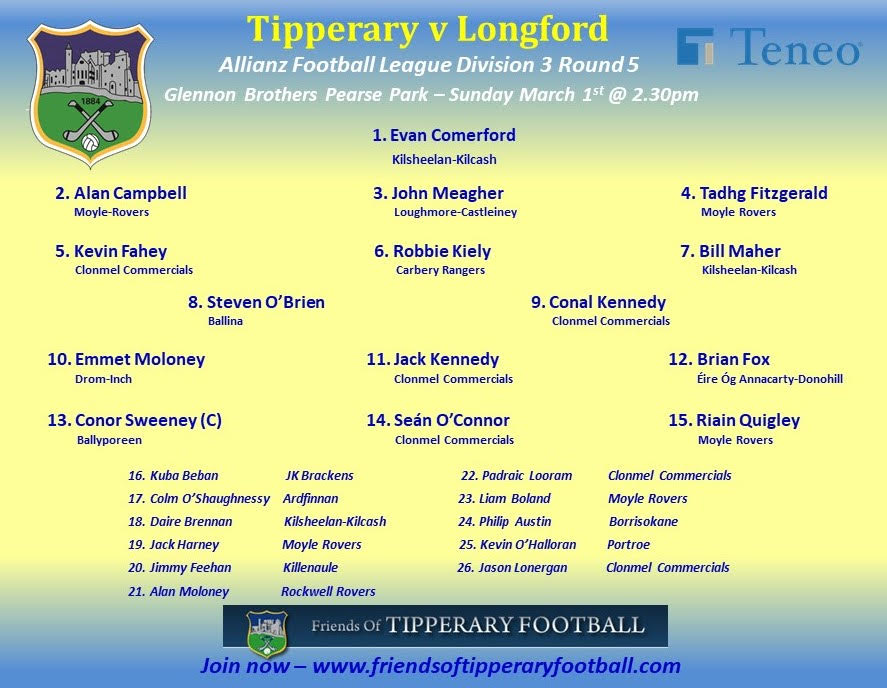 Bloody Sunday, A Bitter Legacy or A Legacy of Bitterness 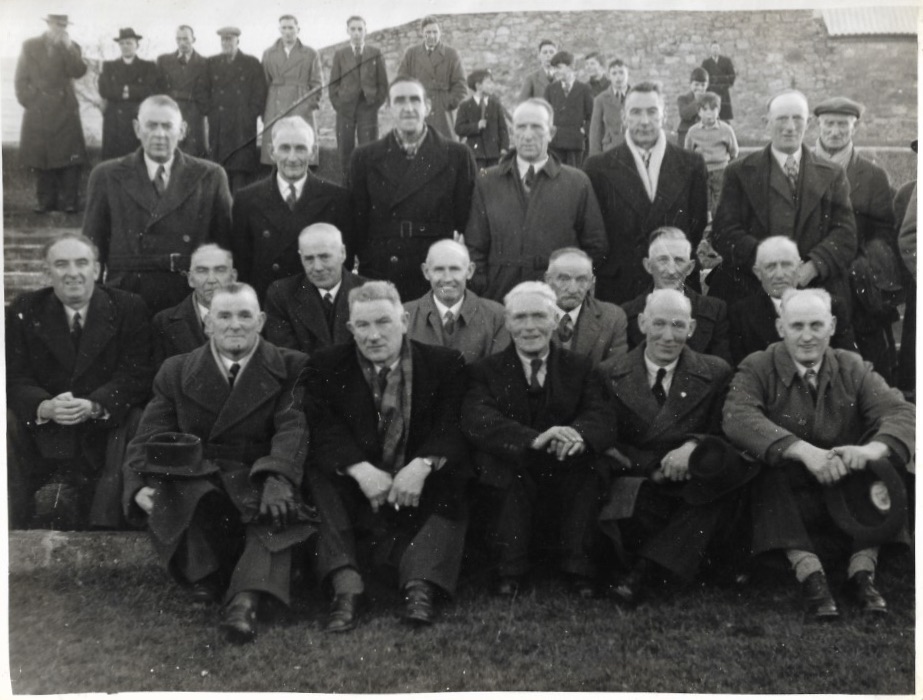 On Monday week, March 9th, (Please note the change of date) John Flannery will deliver a lecture on Bloody Sunday at 8pm in the Abbey Court Hotel, Nenagh. The talk is presented in conjunction with the Tipperary GAA Bloody Sunday Commemoration Committee and as an OHS contribution to Nenagh 800. Bloody Sunday; A Bitter Legacy or A Legacy of Bitterness, will examine the events in Croke Park on the 21st November 1920 and how those events impacted on the GAA in the immediate aftermath and how they still resonate one hundred years later. This talk is the first in a series of events taking place over the coming months to commemorate the tragedy and which will culminate with a replay of the game in Croke Park on November 21st next.

The attack by a combined force of RIC, Auxiliaries and British army on those attending a football match between Dublin and Tipperary left fourteen people dead, including Michael Hogan – the Tipperary corner back. In excess of sixty people were wounded and many others were injured in the stampede which took place when the firing erupted. Attempts by the Authorities at the time, to blame members of the crowd for opening fire and to cover up the actions of the police failed and the event created press headlines worldwide.

The speaker, OHS member John Flannery, is also a member of the commemoration committee. A past-President of OHS, John is a regular contributor to Society lectures and has also delivered talks to historical societies throughout the country. He has also contributed to the popular TV programme Who do You Think You Are and to Ceol Cogadh na Saoirse on TG4. He holds an MA in History of Family from UL and is a member of Tipperary in the Decade of Revolution history group.

Good interview here as @francurry700 and Nenagh based historian John Flannery chat about the upcoming 'Bloody Sunday' lecture on March 9th in Nenagh. The relevant audio starts a minute or so in.. #GAA @lyndamoo7 @TippfootballGAAhttps://t.co/U9gYl1dEOO 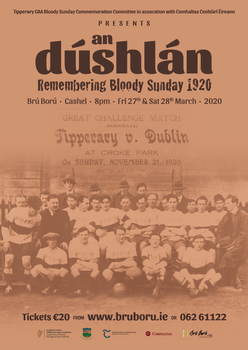 Exploring the events of Bloody Sunday 1920, ’An Dúshlán’ (The Challenge), an original stage production, will draw on the music and song of the time along with eyewitness and newspaper accounts to recall this defining moment in the struggle for Irish Independence, it’s impact on the GAA, and how the echos of those fatal shots of the 21st of November 1920 can still be heard in the Ireland of today.

Tickets for this exciting event can be purchased here: https://www.bruboru.ie/whats-on/bru-boru-events/414/

Minor Manager Tony Smyth has announced his panel that face Kerry this Sunday in the 1st Round of the Minor Munster Championship in John Mitchell Park Tralee at 1.30pm. Best of luck to all our Ladies and management team 💙💛#SeriousSupport #ProperFan#FollowOurJourney pic.twitter.com/fwCjhWNjXm

The Tipperary team to play Waterford in the fifth round of the Allianz National Hurling League in Semple Stadium Thurles, on Sunday 1st March, 2020, at 2pm, has been selected as follows: 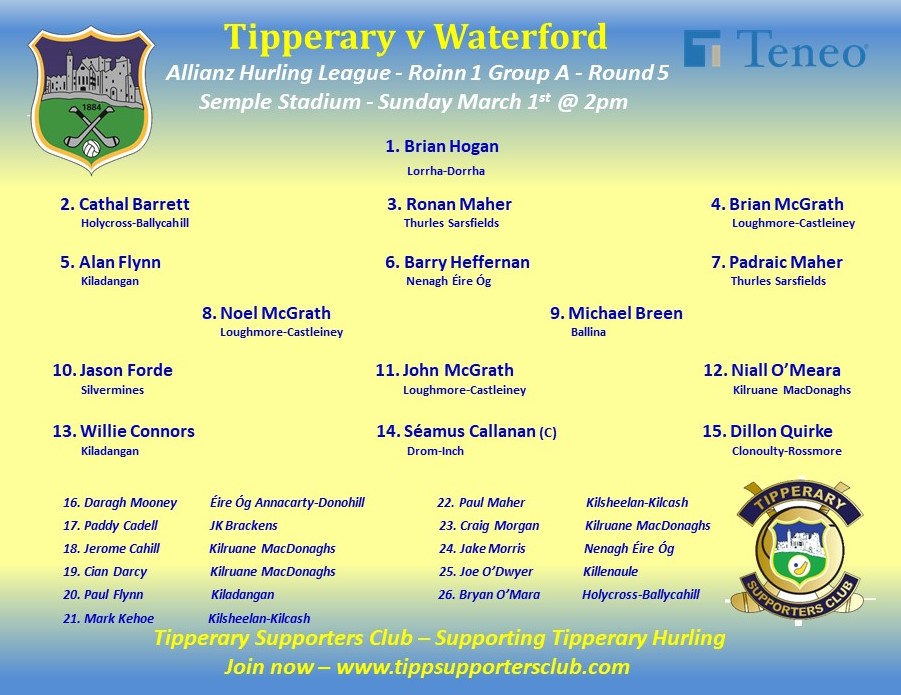