By Fintan O’Toole for the Irish Examiner newspaper 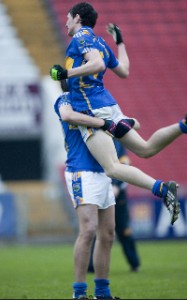 TIPPERARY sprung a huge surprise in last night’s Munster MFC semi-final at Páirc Uí Chaoimh, edging out Cork after a marathon affair that required extra-time to deliver an outcome.

The action closed out in near darkness, yet despite the tremors this result will cause, it was difficult to fault Tipperary’s claims to victory; in a largely mundane match, Tipperary produced the best passages of play.

Indeed they should have wrapped up the match before it entered the additional stages, having raced into a 0-6 to 0-0 lead after 26 minutes and also spurning a 53rd minute penalty when Ross McGrath smacked his shot against the crossbar. At that juncture the tide seemed to have shifted in Cork’s direction, but Tipperary improved on a poor second-half display to close out the match in a decisive fashion in extra-time.

Tipperary were the proprietors of the first-half play with a cornerstone of their overall control being their ploy of sitting corner-forward Michael Ivors in front of the full-back line. It paid a handsome dividend as Ivors frequently intercepted Cork passes defence and gave a splendid display. Cork struggled to negotiate a route past Ivors and overall Tipperary covered well in defence in the opening half and choked the supply lines outfield.

But Cork’s passing was also desperately poor as they wildly lashed balls forward and Tipperary showed greater intelligence to their offensive play. Roger Peters and Billy Hewitt both confidently pointed for them within the opening ten minutes.

Cork in contrast began sluggishly and their difficulties were exacerbated by the loss of full-back Darragh Rodgers through injury. Tipperary increased their advantage with some good scores as the first-half wore on courtesy of Liam Treacy, Luke Murphy and a Hewitt brace.

By the 26th minute they had sailed 0-6 to 0-0 clear and Cork’s plight was deepening. The display of wing-back Alan Cronin did offer Cork a bright spot, and they finally managed to jump off the scoring mark before half time through John Dineen and Brian Hurley. Suddenly the interval deficit of 0-6 to 0-2 was somewhat less daunting.

Cork cranked up the pressure after the interval extracting valuable contributions from Damien Cahalane, Rory O’Sullivan and Patrick Wiley. But it failed to translate into an early deluge of scores and Tipperary had increased their lead to 0-8 to 0-3 by the 45th minute. The game could have been killed off by then but Cork goalkeeper Sean Mellet produced an outstanding save to deny Ross McGrath.

In the final quarter Cork finally started to slip into a scoring groove, atoning for their earlier series of wides. John Dineen, Cronin and David Drake all slotted over points and the impetus lay with Cork entering the final ten minutes. They enjoyed a great slice of fortune in the 53rd minute when McGrath’s penalty effort hit the bar rather than the net, and they seized on that opening to force parity through a Daniel Fitzgerald free and a fine shot by substitute Dean Brosnan.

But despite funnelling a multitude of ball forward, Cork’s attack failed to capitalise as they struck a few excellent chances for a match-winner wide.

Extra-time wound up suiting Tipperary. They had looked like being submerged by Cork pressure nearing full-time but capitalised on the reprieve to settle themselves. Their defence spearheaded by the brilliance of Paddy Dalton, Graham Quinn and Gerard Mulhair, kept the Cork attack at bay while centre-forward Ross McGrath carried the scoring burden.

McGrath arrowed over three points in the first half of extra-time and Tipperary held a sizeable 0-12 to 0-9 lead by the 70th minute. Ger Minihane grabbed one back for Cork, yet Tipperary’s rearguard was stout and a lovely 78th minute score by substitute Johnny McMahon sealed a famous Tipperary win.