Tipperary manager Liam Kearns has announced his starting fifteen for tomorrow’s Allianz National Football League final against Louth in Croke Park with a throw in time of 5pm. 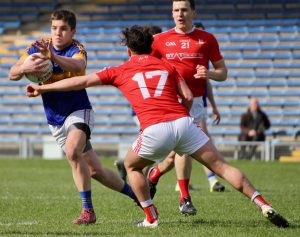 A brief report of the earlier league encounter between these two sides can be read Here.

The last time Tipperary won a league final was in 2014 when we defeated Clare in the Division Four final by a solitary point, 1-16 to 1-15 with Tipperary’s goal coming courtesy of Ballyporeen man, Conor Sweeney. A number of players will be aiming to add a Division Three medal to the Division Four one they got on that occasion. Interestingly goalkeeper on the night was current selection Paul Fitzgerald.

In other news we send our congratulations to Michael Quinlivan who was today named as the Irish Independent Sports Star of the Week following his dramatic hat-trick of goals last Sunday in the Athletics Ground, Armagh. Michael was also named at full forward on the Official GAA team of the week. Well done Michael. 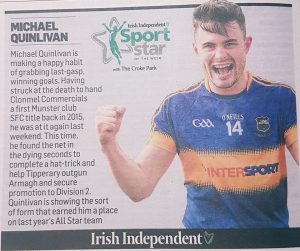 There are three supporters’ buses travelling to this game.

The second bus leaves Templemore and will collect supporters in Roscrea also. If you’d like to book a seat on this particular bus please contact 086 326 0996. Again there is limited seating remaining so early booking is advised.

Ardfinnan are also providing a supporters’ bus and it will leave The Community Centre, Ardfinnan at 12.30 sharp. It will cost €5 for a child and €15 for an adult. It will stop at Junction 14 on the way and on the return journey for refreshments. Please contact 087 299 1443 to book your place.

On Saturday there will be seating in the Hogan Stand only. Admission will be Adults €20, Under 16s €5. Students and Senior Citizens should purchase full price tickets on the day of the match and can claim a rebate of €5 on proof of ID at a designated Hogan Stand turnstile. All stand tickets for this match are unreserved seating.

Tickets are available from https://www.gaa.ie and at SuperValu and Centra stores.

Well done to our under-17 footballers who defeated Clare by 0-14 to 0-10 in the Munster under-17 Football Competition Quarter-Final on Tuesday April 4th at Semple Stadium. Tipperary survived a Clare rally in the closing twenty minutes  to clinch a semi-final clash with Kerry next month. Tipperary deserved their win thanks to an excellence first-half performance where they led by 0-8 to 0-2 at the break. Tipperary will now play Kerry in the semi-final in Austin Stack Park, Tralee on May 2nd. 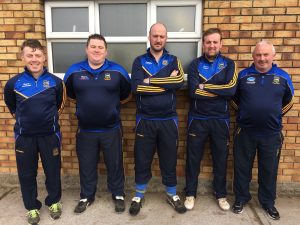 The Friends of Tipperary Football

We encourage all Tipperary supporters everywhere to please join The Friends of Tipperary Football by clicking here or clicking the Join tab at the top of this page. Membership is a very reasonable €20 and enters you into competitions to win match tickets for all of Tipperary’s football games this year as well as the chance to win tickets for the football and hurling All Ireland Finals in Croke Park.

The annual Golf Classic of the Friends of Tipperary Football will take place on Saturday 6th May, 2017 at Thurles Golf Club.

The annual Golf Classic is run to raise funds to support Tipperary Football. Tipperary football is on a rising curve with the minors and under-21’s reaching the All Ireland finals in 2015, and the senior footballers reaching the All Ireland semi-final in 2016, gaining promotion to Division 2 of the Allianz National Football league for 2018, and now setting their sights on Munster glory.

You can also support this event by sponsoring a Tee. Tee sponsorship is available for €50. The annual Golf Classic is our main fundraiser in the year and once again we seek your continued support. Our thanks again to our main sponsor Mr Mister Menswear for their sponsorship and to all who sponsor and support this event.