In 1934 the Tipperary footballers won the county’s very first All-Ireland minor football title. Along the way they lost their opening match to Clare and never actually played the final. Here is their story. 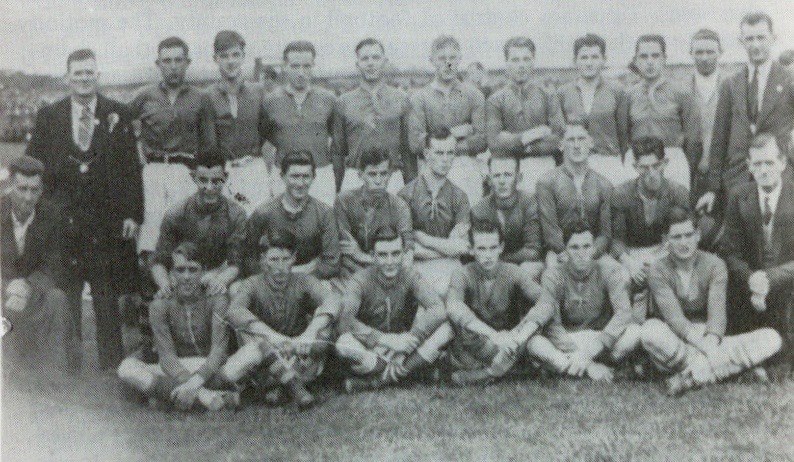 1934 saw Adolf Hitler declare himself Der Fuhrer of Nazi Germany, Stalin began his Great Purges while The Great Depression hit a turning point in the US with unemployment decreasing to 22%. In Ireland, the Gaelic League sought a ban on the broadcast of jazz music because it was “inferior” and contrary to the spirit of Christianity and nationality, the National Athletic and Cycling Association banned women from taking part in events and meetings and in Thurles 300 students from the Christian Brothers’ School went on strike in protest against the wearing of blue shirts by many their classmates. They paraded through the town singing Amhrán na bhFiann. It was also the year the GAA celebrated its golden jubilee “having saved the soul of Ireland” and stood “like a mountain fortress to guard the manhood of Ireland, and keep it true to its destiny” (Fogarty, Philip, Canon (1960). Tipperary’s G.A.A. Story. Thurles: The Tipperary Star. 347.) To celebrate the GAA decided to hold the annual convention in the town of its birth and the people of Thurles “lived true to tradition in providing a rallying centre for Gaeldom.” “The townspeople spared neither expense nor effort to have everything decorated, and the streets ornamented with bunting, flags and streamers, with appropriate mottoes” (ibid). 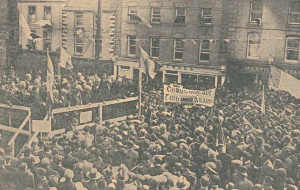 Please click here for an online version of the Irish Independent’s special publication on the GAA’s Golden Jubilee in Thurles. 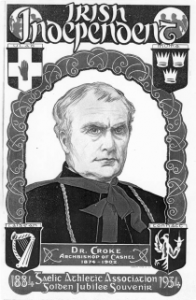 The minors of the county also covered themselves in glory with both the footballers and hurlers achieving All-Ireland glory. The hurlers accounted for Waterford in the Munster final (3-6 to 0-5)  before stumbling over the finish line against Laois by the narrowest of margins, 4-3 to 3-5 with Con Maher from Thurles captaining the side in the All-Ireland final. 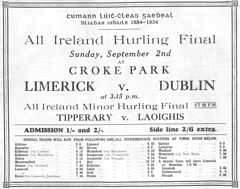 The footballers opened their campaign against Clare and were beaten 3-3 to 2-5 but successfully objected to the result and went forward to meet Kerry in the Munster semi-final in Clonmel. The Guardian described the game as “fast and exciting”, “the football at all stages was brisk and clever and raised the crowd to a high level of enthusiasm”. “The second half was fought at a hot pace, Tipperary making a great effort to pull the game out of the fire. Clare however, held their advantage to end, to win by 1 point”.

The morning of the Munster semi-final against Kerry was wet but it cleared up in the afternoon in time for the match. The Nenagh Guardian described it as “a sparkling affair, and excited keen interest right through. The teams were well matched. Tipperary, playing well, held the lead to the last part of the second half, when Kerry registered the equaliser and the game ended in a draw, 2-3 all”.

In the replay “the Tipperary youths made a wonderful back-to-the-wall fight, and held their ground against a ruthless attack, giving back as much as they got. Do or die, they were out to win the replay, and Kerry’s monopoly was broken in an epic struggle” (Fogarty, Philip, Canon (1960). Tipperary’s G.A.A. Story. Thurles: The Tipperary Star. 359).

And so, it was onto a Munster final date with Waterford in their home patch. The Cork Examiner reported that “the weather outlook of the early hours was not too encouraging with the result that the number who availed of the special which left the Glanmire Terminus at 10:15am was not as large as it ordinarily would have been.” (Cork played Waterford in the junior hurling championship as part of a double header which the Deise won 7-10 to 5-2).

Waterford opened with a strong breeze and opened the scoring with a point but a determined Tipperary side owned the half and led their opponents 2-3 to 0-3 at the break. Tipperary continued in the same vein of form on the resumption and outscored Waterford 1-7 to 0-2 to leave the full-time score 3-10 to 0-5. The Nenagh Guardian reported that Tipperary “were superior from the start” and thoroughly deserved the win. 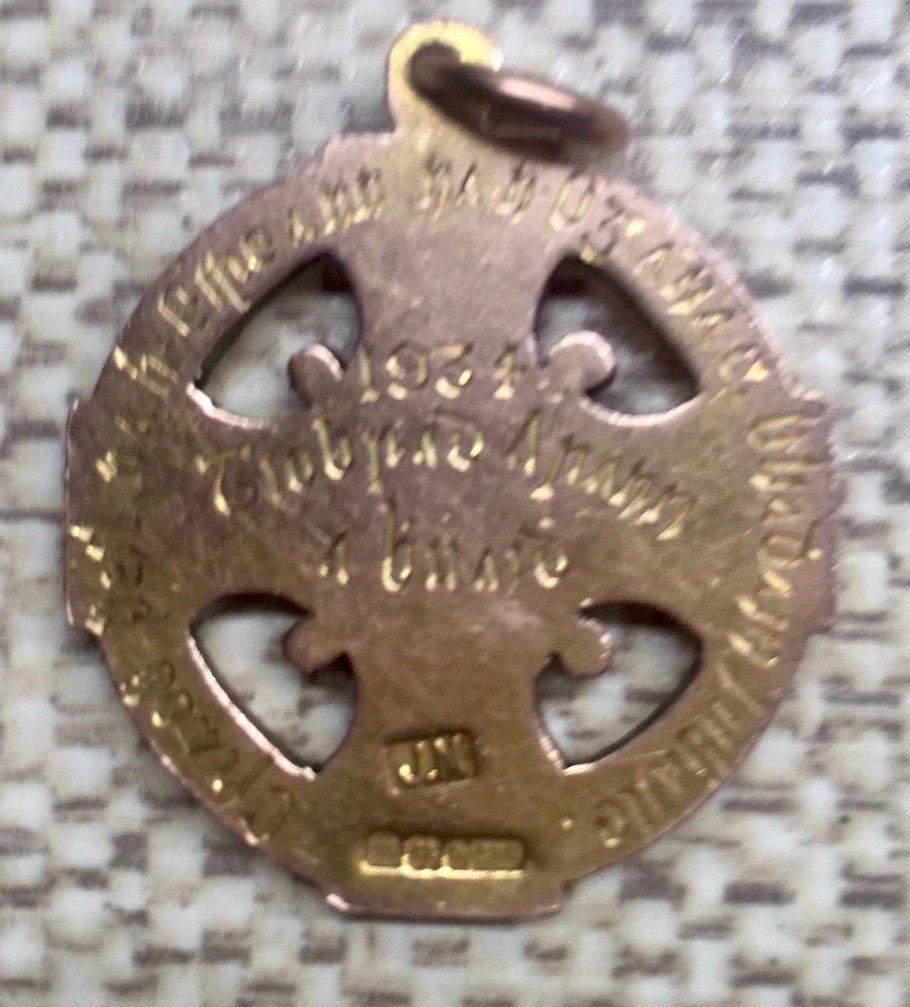 This is the medal presented to Martin Power from Clonmel Commercials. Unfortunately Martin passed away at the young age of 26. His nephew, Martin Power (who was named after his uncle) kindly sent us in this photograph.

The All-Ireland semi-final against Mayo was held in Killarney as part of a double bill with Kerry playing Dublin in the senior with the men from the capital marching on towards the final winning 3-8 to 0-6 while the Premier minors defeated their Connaught opponents 4-9 to 2-5.

D Ryan from Tralee was the referee and it wasn’t long after he started the game that Fethard’s Mick Byrne opened the scoring, a goal, described as “an easy score” by the Cork Examiner.  The first half saw some “stubborn tussles” and “the back play was good, but the clearances were mostly of short range”. At half-time, Mayo led 2-4 to 1-3.

Martin Power (Clonmel Commercials) got the second half off to the perfect start when he “rushed” C Fitzgerald, the Mayo net-minder, and scored a goal to narrow the gap to a point. Moments later he levelled proceedings after “a free to Tipperary saw the leather collide with the side post, but Power got the ball on the rebound to get the equalising point”. The lead swung over and back during the next period. John Maher (Clonmel Commercials) “shot a beauty of a goal and Power on the re-entry raised the point flag” to give Tipperary a lead they wouldn’t surrender. Mayo “fought on pluckily to the full whistle which proclaimed a meritorious victory for Tipperary”.

This turned out to be the de facto All-Ireland final as both Tyrone and Dublin, who had come through their respective provinces, were disqualified for illegalities and Tipperary were awarded the 1934 All-Ireland title. Playing illegal minors was common place in GAA circles in the early days however the fact that the final was not played does not take away from the greatness of this fantastic minor team. 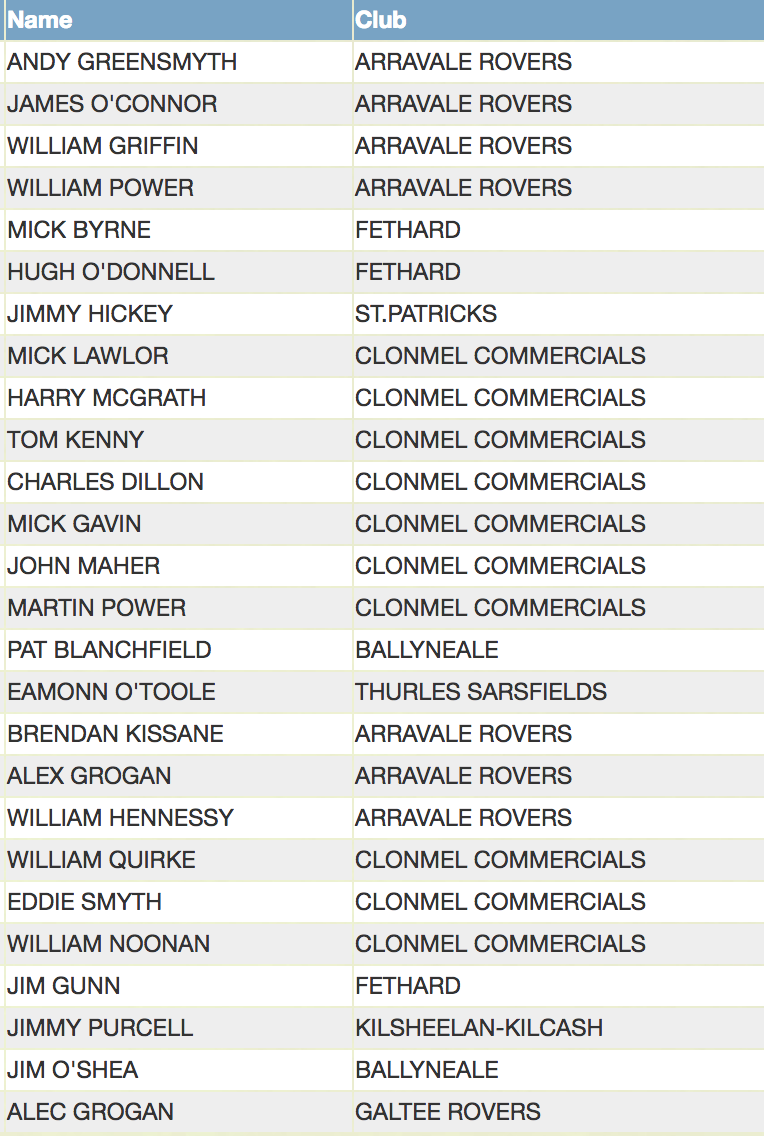