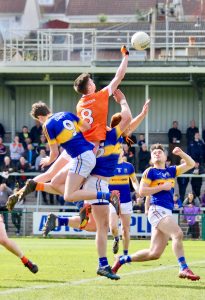 Following this morning’s draw on RTE Radio One it has been confirmed that Tipperary will play Armagh this Saturday in Semple Stadium at 5pm with Monaghan and Carlow on at 7pm in Dr. Cullen Park.

Liam Kearns will be delighted to have gotten a home draw following last weekend’s energy sapping trip to Kingspan Breffni Park but Armagh will be formidable opposition and will no doubt be gunning for revenge following last April’s encounter between the two that saw a last gasp Michael Quinlivan goal snatch victory from the jaws of defeat for Tipperary to secure promotion and consign the hosts to another year of division three football. 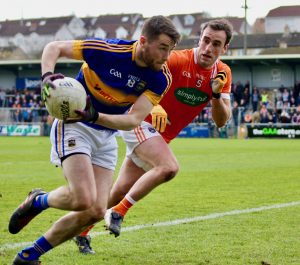 The teams have crossed swords twice in the league in recent years with Armagh coming out on top in the 2015 encounter, 2-8 to 0-13, while twelve months later Tipperary reversed the result, 3-8 to 0-16. The closeness of these two games suggests Saturday’s match will be no different.

Fresh from their 1-12 to 1-7 win over Westmeath, in which they showed great composure and guile to win in difficult circumstances, Armagh have been buoyed by the return of Kieran McGeeney to the sidelines following a suspension and his presence alone will be worth a score of two to the Orchard County. The Mullaghbawn Cúchullain’s man is an iconic figure in Armagh having captained them to their first All-Ireland senior football crown in 2002. Winner of three All-Stars (1999, 2000 and 2002), six Ulster titles (1999, 2000, 2002, 2004, 2005 and 2006) and the Texaco Footballer of the Year in 2002, McGeeney has long been recognised for his drive, professionalism and determination to win. Semple Stadium will be familiar to the Armagh manager having been involved in the background with the Tipperary senior hurlers in 2014 when they reached the All-Ireland final against Kilkenny. 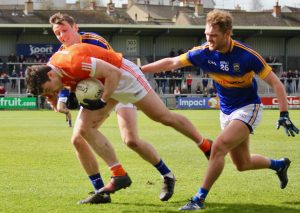 While Philip Austin and Michael Quinlivan made a welcome return to action last Saturday against Cavan it is unlikely that they will have sufficiently recovered to start. Added to that are the other well document list of injuries that will continue to give Liam Kearns plenty to think about.

There’s nothing like a championship game in Semple Stadium and while the game is live on Sky Sports we hope a large number of Tipperary fans turn out to support our magnificent footballers who have provided us with numerous memorable moments in recent years.

GAA Team of the Week

We are delighted to announce that both Alan Campbell and Robbie Kiely have been named on the official GAA football team of the week. With so many matches on over the weekend it speaks volumes about their performances that they were recognised for their brilliant displays against Cavan.

If you would like to show your support for our great football team you can do so by joining the Friends of Tipperary Football by clicking here. Joining takes less than a minute, costs €20 and all the players really appreciate all the support.