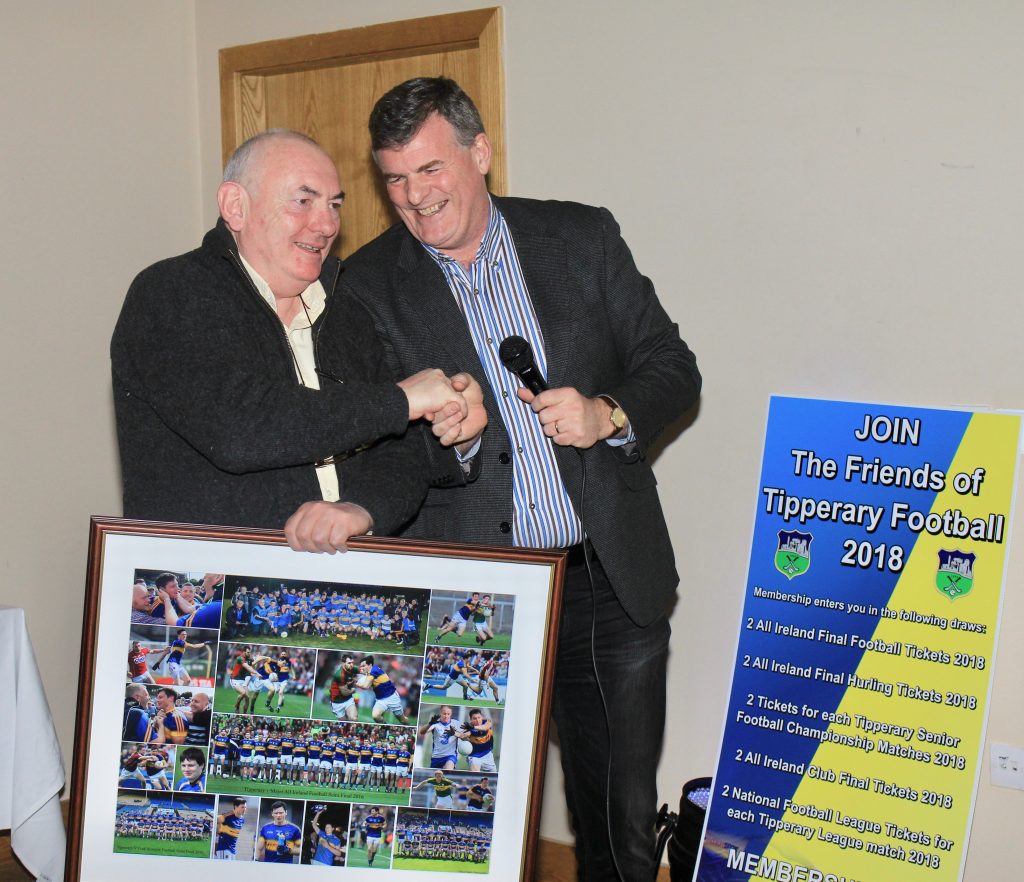 Tonight, the Tipperary senior footballers received their division three Allianz National Football League medals, won last April in Croke Park against Louth, in the Clonmel Park Hotel and the sad news was revealed that Aherlow’s Ciaran McDonald, due to ongoing injury problems, has announced his retirement from Tipperary.

Ciarán made his senior intercounty championship debut in 2008 against Limerick and it was obvious straight away that he was a special talent. A tenacious corner back, his performances for both Tipperary and Aherlow have been extraordinary and one of his proudest moments came in 2010 in Austin Stack Park, Tralee when he led the under-21s to their first ever Munster title overcoming the Kingdom 1-7 to 1-6. In 2014, he represented a successful Irish team in the International Rules series against Australia. His final game in the blue and gold came in the All-Ireland semi-final against Mayo in 2016.

Speaking at the medal presentation tonight manager Liam Kearns spoke very highly of the Aherlow man. He referenced the 2010 Munster under-21 final when, during a break in play, McDonald got down on the ground in front of his marker and proceeded to do a number of press ups and in the process totally out psyched his opponent. “It was his leadership skills that made him stand out” commented Kearns. “Whenever there was a meeting and the players wanted to speak, you may have noticed that I always made sure Ciarán spoke last. That was because what he had to say would leave an impression. There were times when he left us with tears in our eyes”. Kearns went on to reveal that McDonald’s only physical training in the run to the All-Ireland semi-final in 2016 “was done in the pool and on the exercise bike” and yet it was a measure of the man that he was consistently Tipperary’s best defender in those games. “We always put him on the best inside forward and no one ever got the better of him”.

Ciarán was unable to attend tonight’s function and in his place his father Pete accepted a beautiful framed section of photographs of Ciarán taken by John Kelly, Clonmel.

Speaking at the event incoming Football Committee chairperson Barry O’ Brien spoke of the 2010 Munster under-21 final and how as in the early hours the team bus approached the Tipperary border at Aherlow that Ciarán instructed the driver to stop the bus and the team disembarked and crossed the bridge into Tipperary on foot with the trophy in hand. O’ Brien also thanked Joe Hannigan for all his work over the last five years and reminded the squad of the last time that Tipperary reached division two of the league they were quickly relegated back to division three.

Outgoing chairperson Joe Hannigan spoke about the importance of the Friends of Tipperary Football and their fundraising efforts. He thanked the players who have committed to selling membership because of the amazing support the Friends have given them over the years. He went on the speak about the “quality” management team we are so lucky to have and how Liam Kearns “wants success for Tipperary” and that he is a “top class individual”. The biggest cheer of the night came when Joe thanked kitmen Murt Kennedy and Dylan Hickey for all their “professional” work over the year. The two have made a huge impression on all involved and there is little doubt that we could not have gotten better and more committed people to do the job.

As Joe was concluding his speech 2017 captain Brian Fox rushed to the stage and took the microphone off of him and surprised Hannigan by presenting him with a voucher, a card and a framed photograph of Joe from all the players. Fox thanked Joe for all he had done for the panel over the years and that he “always gave 100% to Tipperary football. The players really appreciate you Joe and everything you have done for us and we can’t thank you enough.” 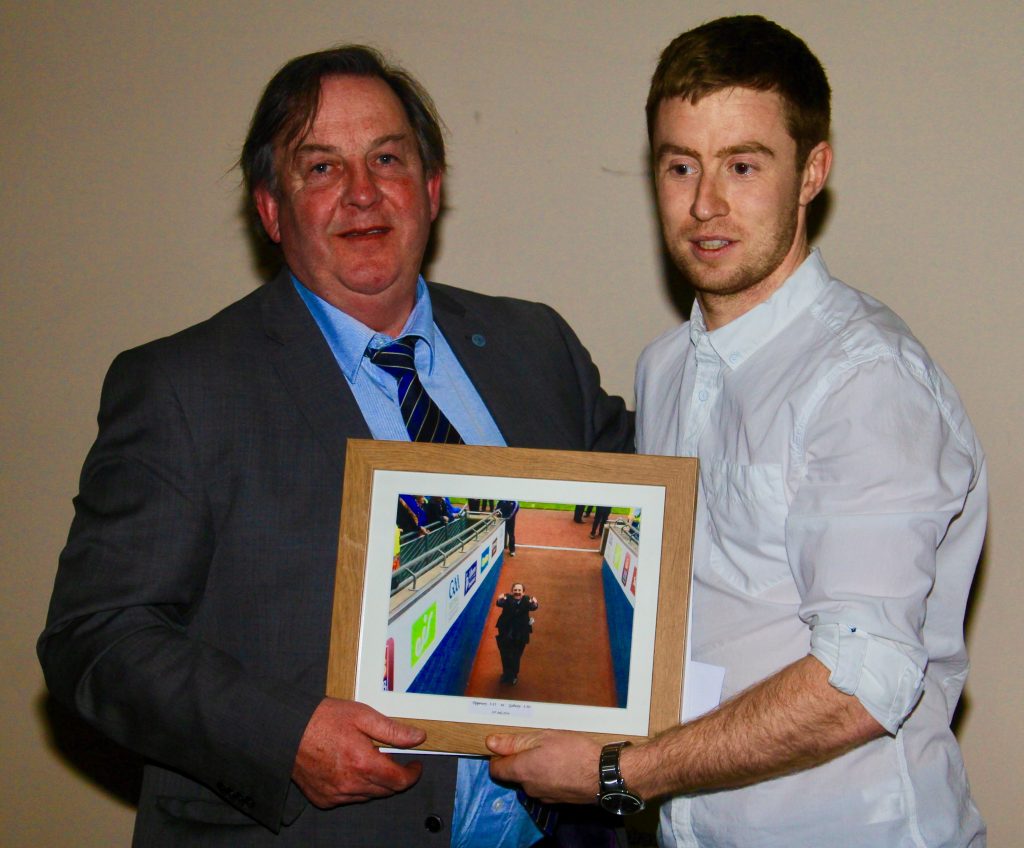 Today the seniors played Limerick in a senior challenge in Golden Kilfeacle and as usual the pitch was in immaculate condition. Tipperary emerged victorious 2-16 to 1-6 with Michael Quinlivan grabbing both goals. 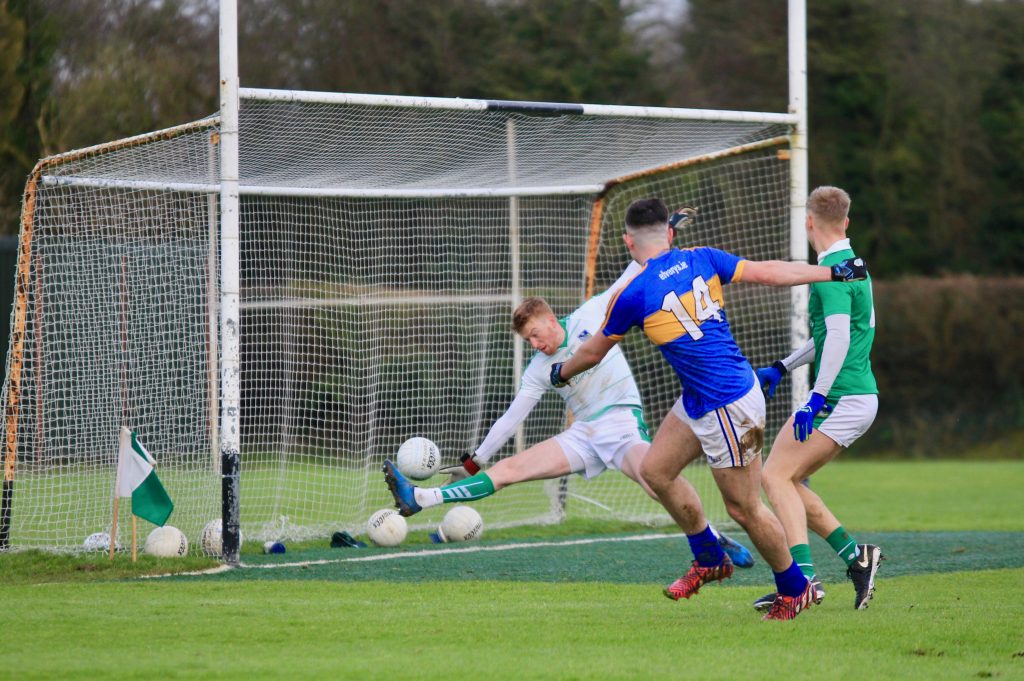 Michael Quinlivan scores the first of his two goals today 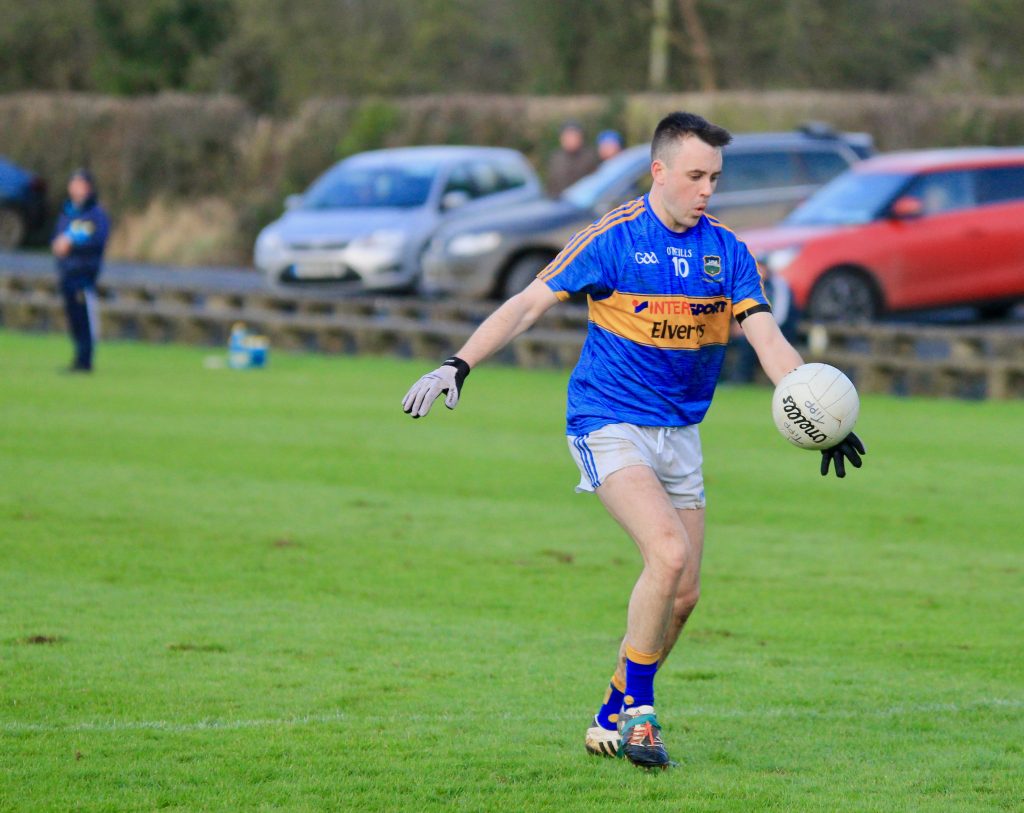 Stephen Murray, Burgess, kicks his second point of the day on his senior debut 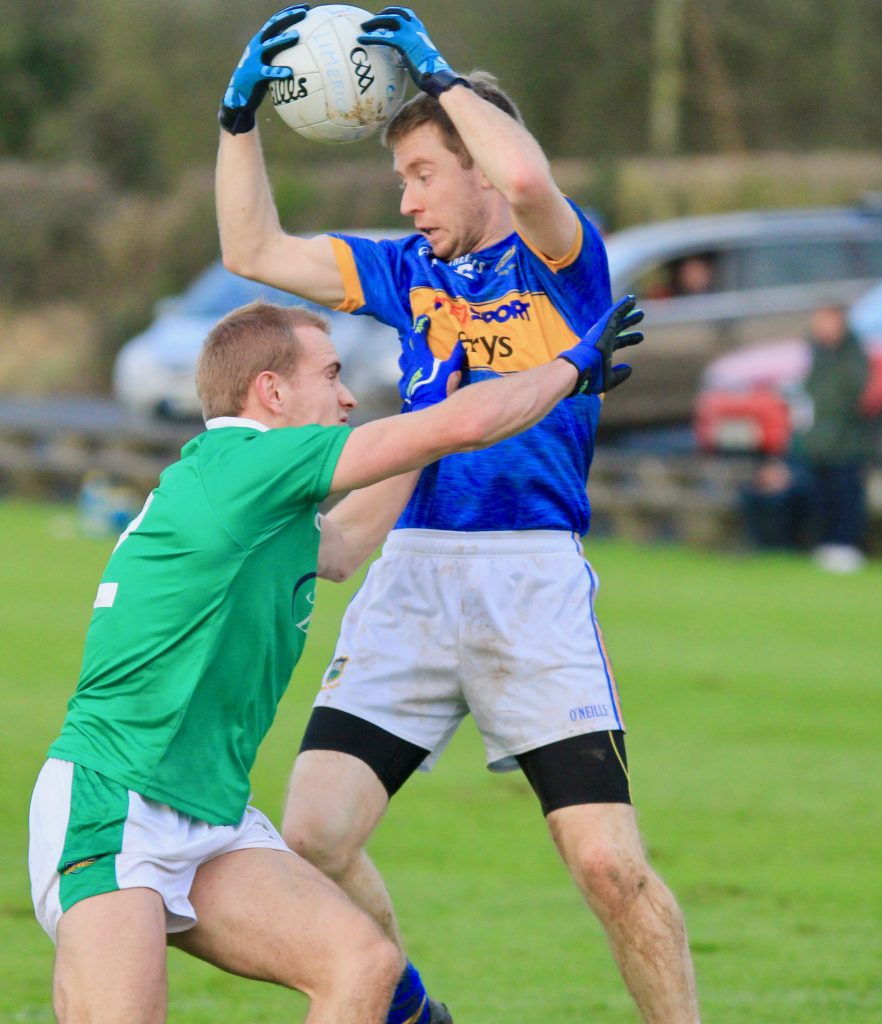 After the game in the clubhouse we had the official launch of the 2018 membership of the Friends of Tipperary Football in the West while the official South launch took place in the Clonmel Park Hotel. We encourage all Tipperary footballers to join the Friends on www.friendsoftipperaryfootball.com/join or by contacting any committee member. 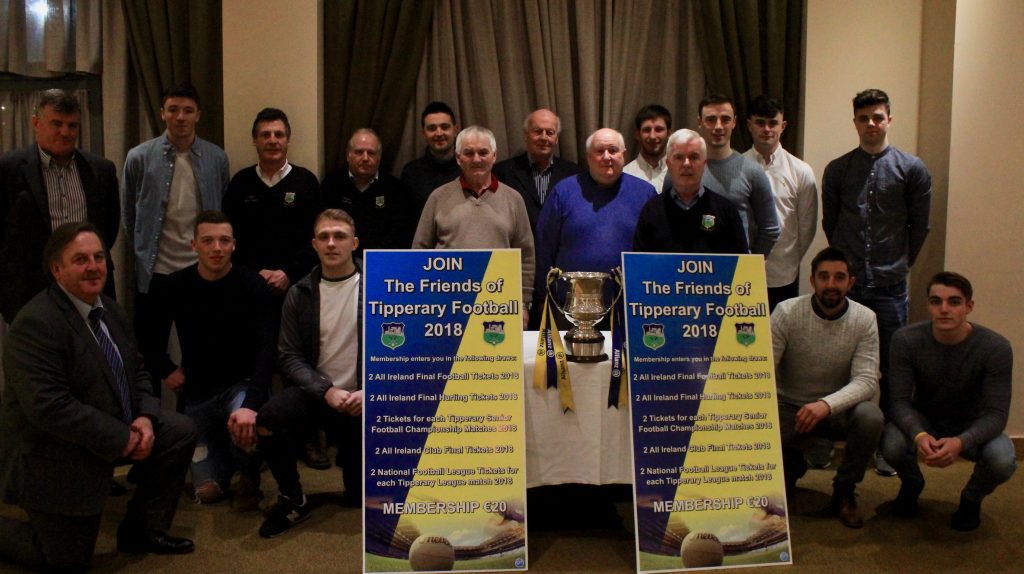 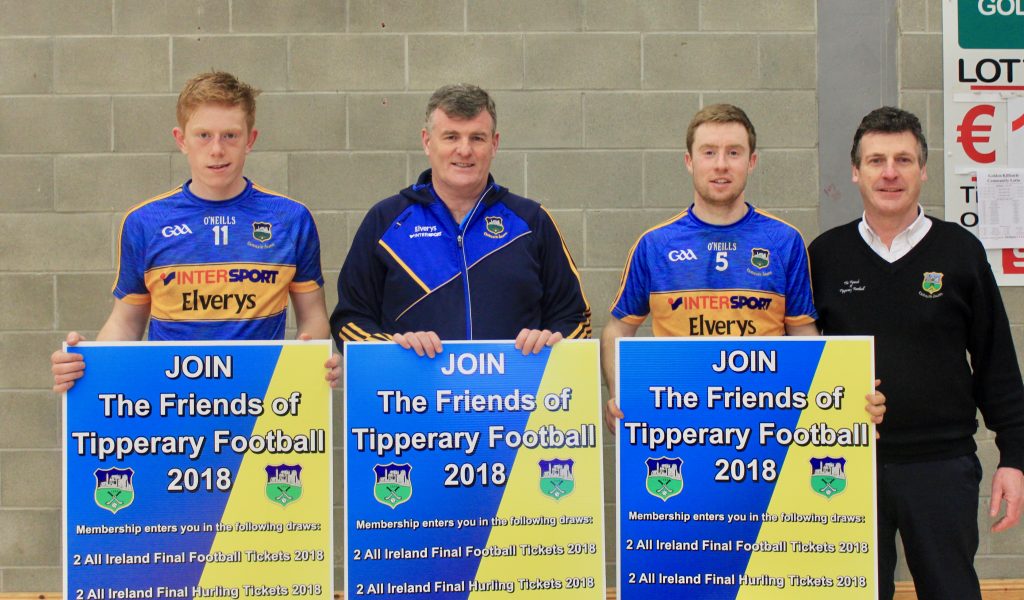