Anthony Shelley Looks Back at Yesterday’s Heartbreaking Defeat to Mayo 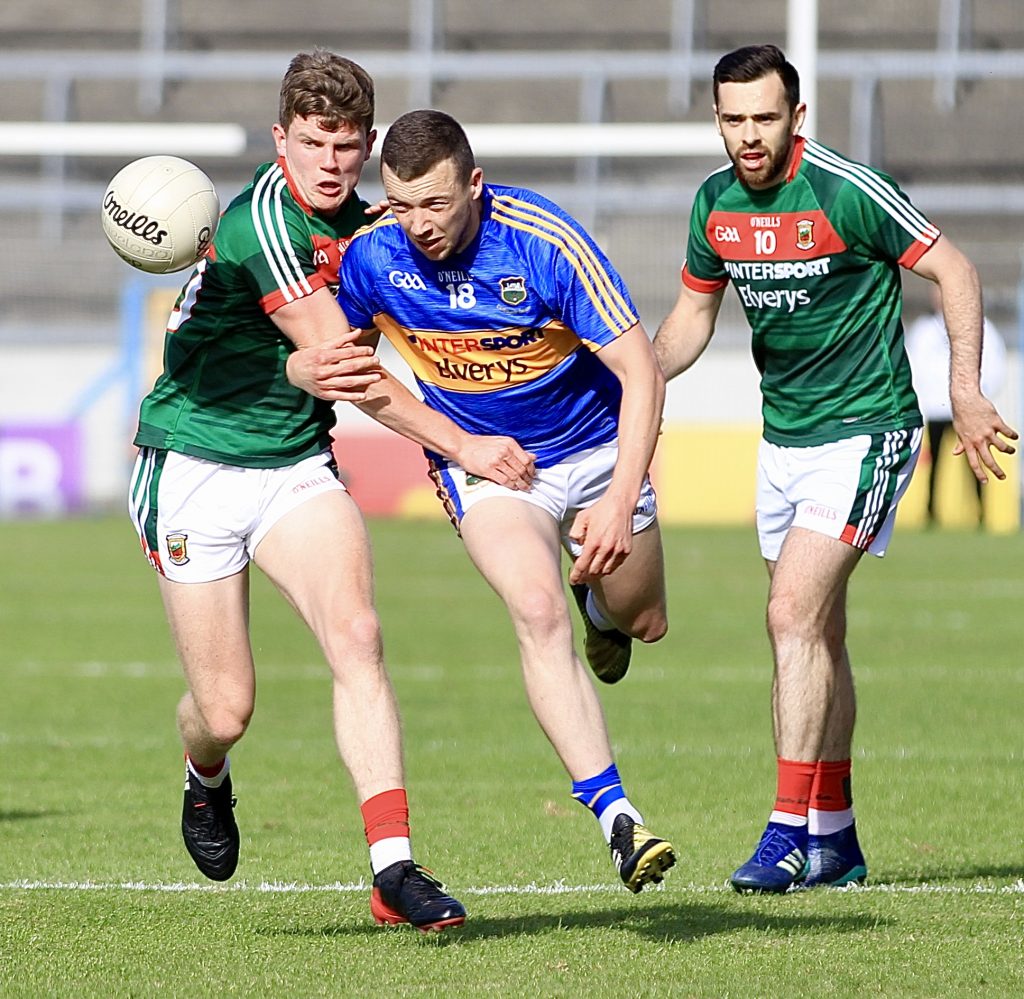 The year was 1992 and my first visit to Crusheen in Co Clare would prove to be an eventful one. After being fed and watered and fed again by my host for the weekend, a wonderful lady called Mary O’Brien, we headed to Fogarty’s Thatched Pub where at two in the morning I became, what used to be known as a “found on”.  The Guards raiding the pub would usually mean the end of the night but not in Crusheen, Co Clare. No Siree, the night was only beginning.
I’m not sure who drove. Whoever it was probably shouldn’t have but to paraphrase the opening line of LP Hartley’s novel The Go-Between, “The past was a foreign country, they did things differently back then”.  Twenty minutes later, we joined a crowd who were singing and dancing around a bonfire on the side of the road.  My capacity for drinking fine ale and strong liquor wasn’t what it is now and my state could best be described as halfway between inebriated and transmoglified so my decision to sample poitín for the first time wasn’t the best one I ever made. 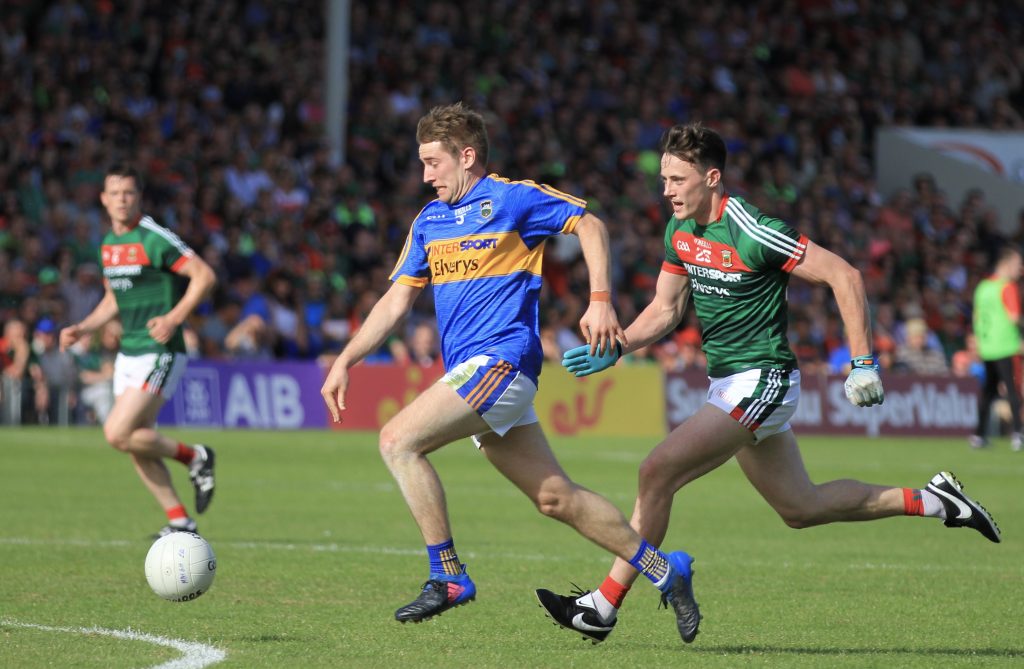 Just as I was thinking I was after burning a hole in my oesophagus, seanchaí Eddie Lenihan rose to his feet to tell us a story about bad luck that befell a bunch of misfortunates who cut down a fairy tree in a place called The Hand near Milltown Malbay.  Because I had a few on me, I didn’t like to say it at the time but, I suspect Eddie wasn’t telling the truth.
At breakfast the next afternoon, Mary informed me that I had attended the St. John’s Eve celebrations on Spancil Hill. It was a tradition I hadn’t been aware of up until that point but it certainly explained how Johnny was able to meet his friends and neighbours, the tailor Quigley and get the shift from Ned the farmers daughter all in the one flying visit home from California.

26 years later, I’m sitting at home hoping that the 23rd June 2018 will be every bit as eventful when the phone rings and “No Caller ID” appeared on the screen. No good can come from answering those calls so I didn’t.
Two minutes later a text came through. “Well Shel, do you want a free ticket to the match tonight” 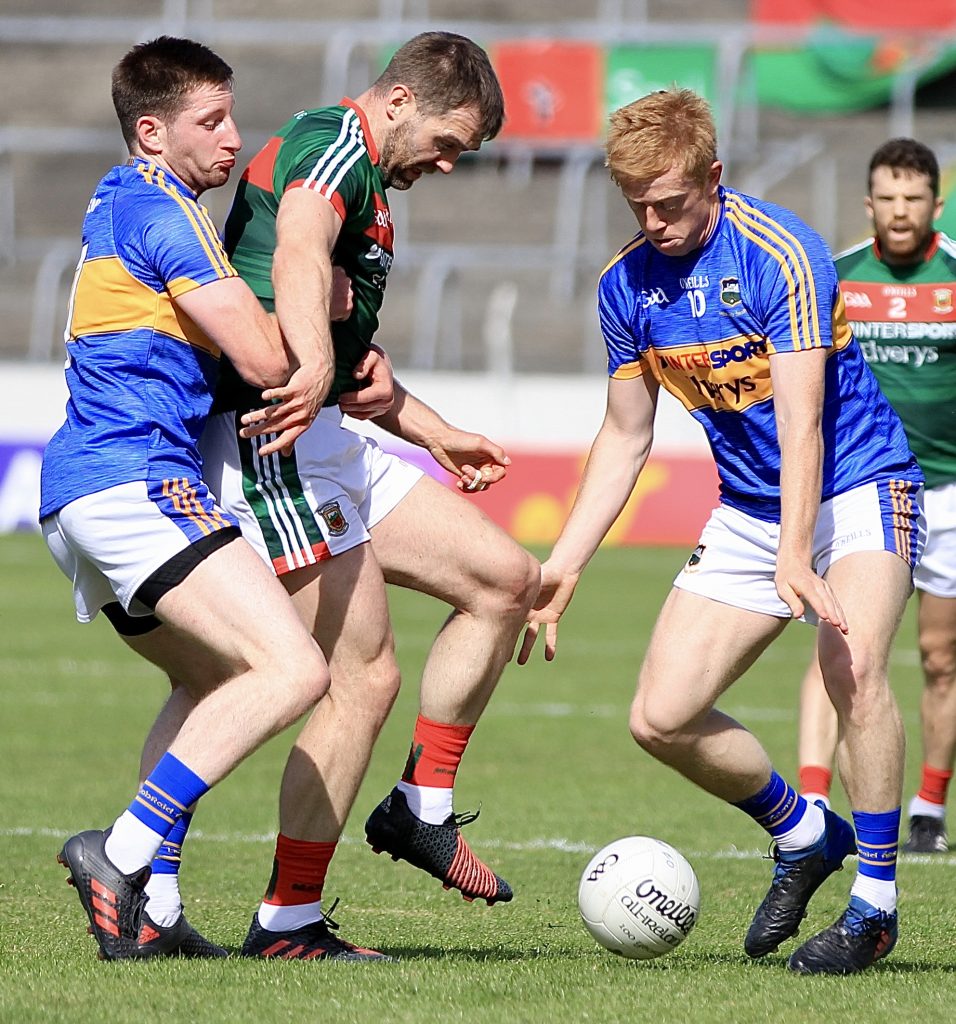 It was a welcome text but an awkward moment. The sender knew me well enough to call me Shel and offer me tickets, but yet I didn’t have his or her name in the contact list on my phone. Under the circumstances, I thought it would be rude to ask who was texting so I replied “Sound, where will I meet you?”
A couple hours later I’m standing outside Mackeys pub awaiting the rendezvous with the mystery caller. A car pulls up, the window is rolled down and I await the password exchange. “Crackling Rosie get on board” came the voice from the car. “Play it now, play it now” was my reply. A white envelope is passed through the window and the car moves off. 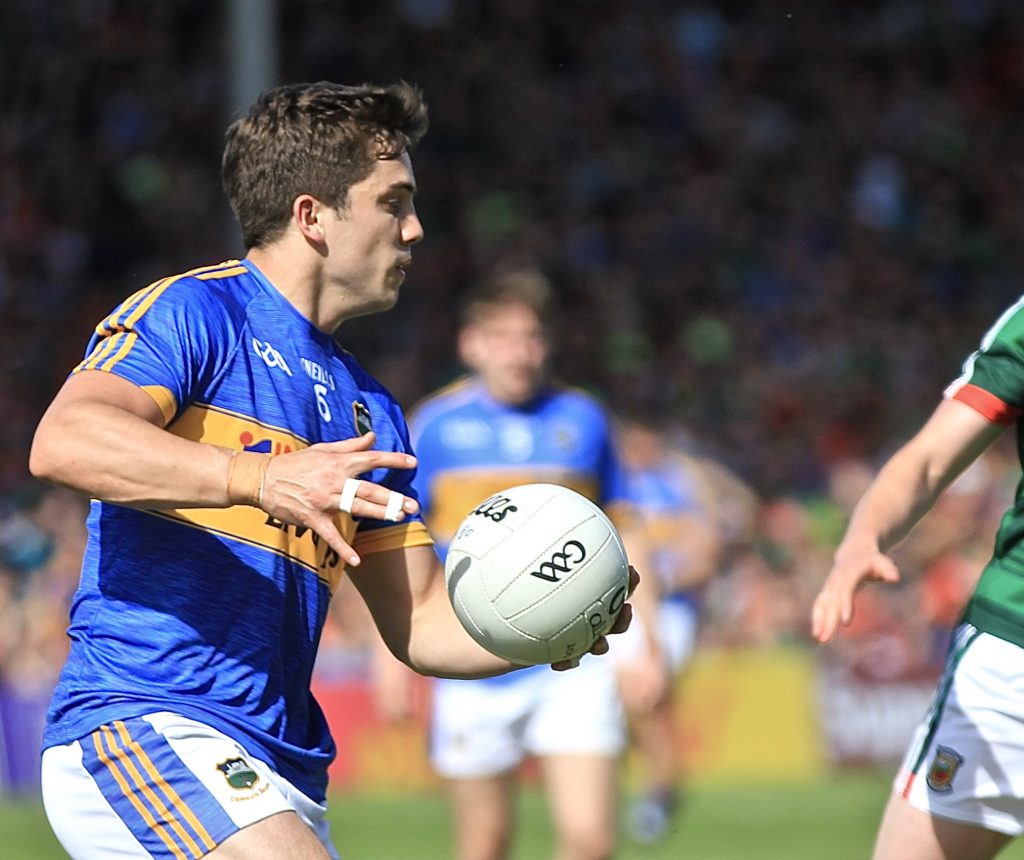 There are still two hours to throw in so there is nothing for it only to pop in to see Larry Mackey and sent a couple of Diageo’s finest down the red lane. I fall into conversation with some alarmingly knowledgeable football men and the better halves.
We spoke about everything and yet we spoke about nothing. For example, one of women informed us that the mother of Michael Nesmith from the sixties pop band, The Monkee’s, invented Tipex or Liquid Paper as it was originally known. At first I thought she was messing but then I saw her face…………………. 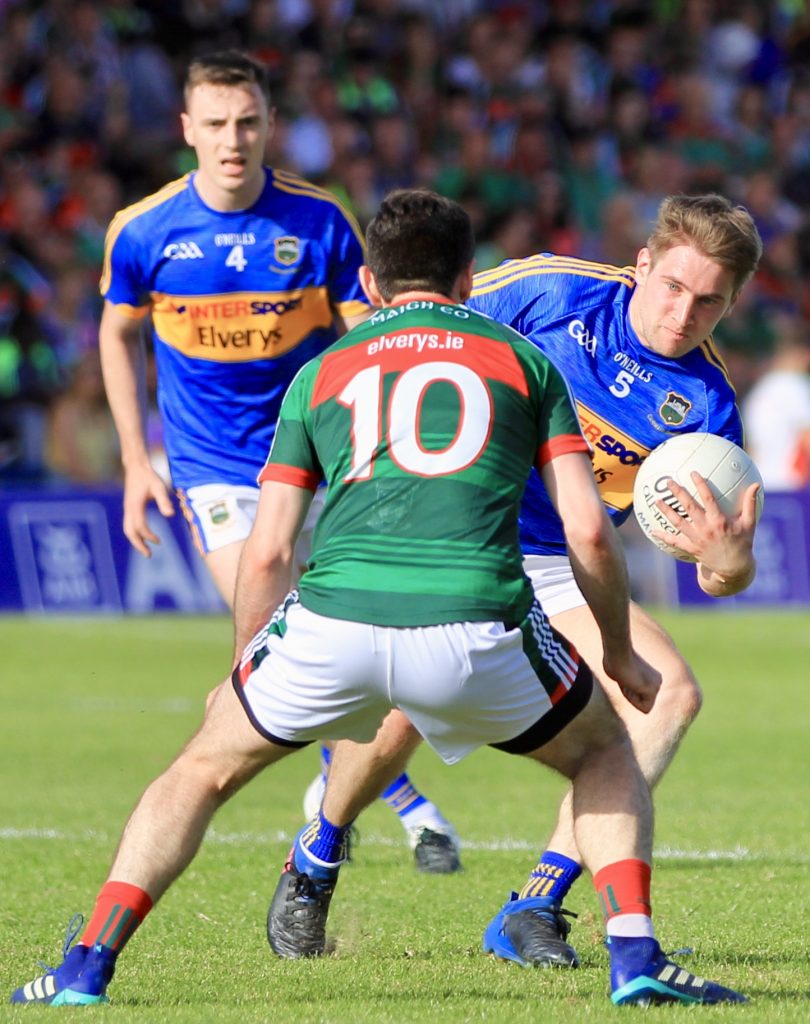 And so via been a “found on” in a pub in Clare, chopped down fairy trees, mystery phone callers and Monkee’s with tipex, I took my place in the stand for the re-match of the 2016 All Ireland semi final between Tipperary and Mayo.
The Westerners made the brighter start and played with a pace and a power that had even the most optimistic Tipperary supporter fearing the worst. Two Cillian O’Connor frees and points from Aidan and Seamie O’Shea saw them four points up after eight minutes. 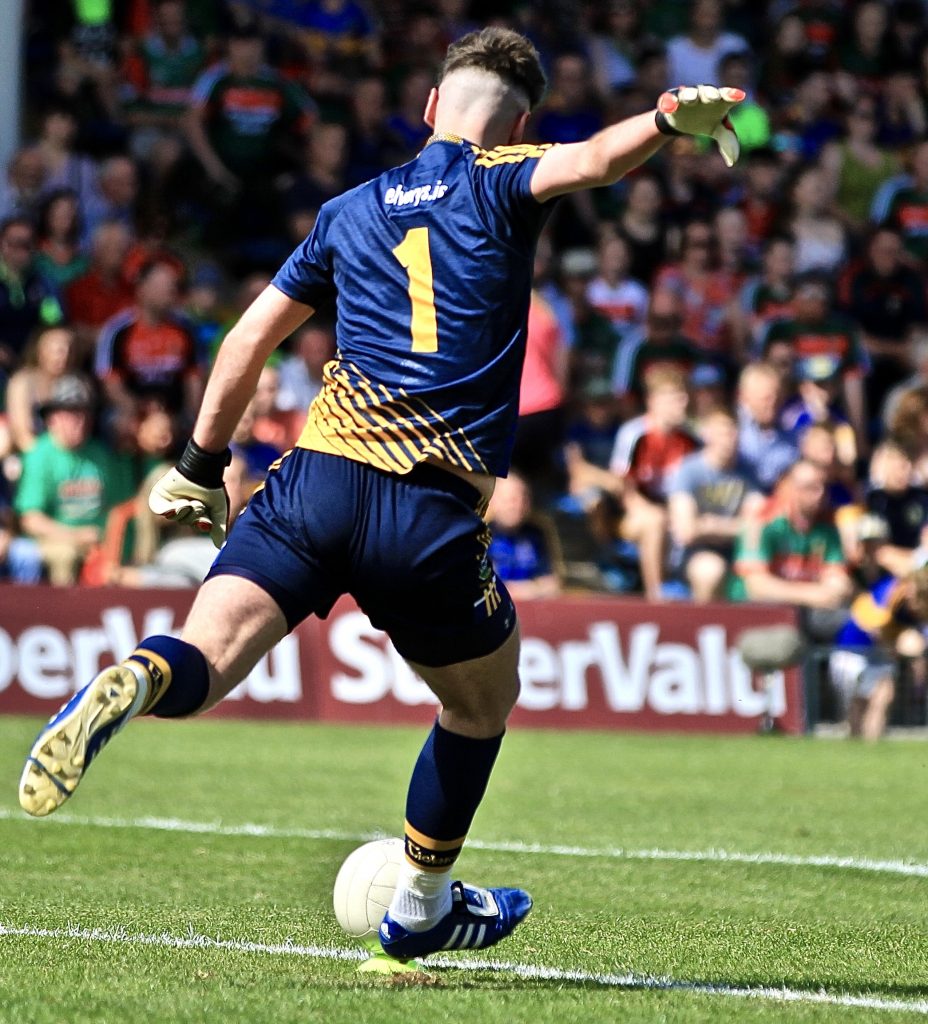 Philip Austin opened the Tipperary account and two minutes later Michael Quinlivan, the most feared attacker since Billy the Kid was in his heyday, fisted to a high ball into the box from Josh Keane to back of the net. Another Austin point puts us 1-02 to 0-04 and suddenly the nightmare start has turned into a dream.

Despite this there was still a worry in every Tipp supporters mind. It was clear that referee Maurice Deegan was going to make us to work harder for frees than Mayo. The slightest contact by a Tipp player and Maurice would indicate that he was playing the advantage rule. I have watched John Wayne movies where the baddies didn’t have their hands in the air as often as Maurice had yesterday when Mayo were on the ball and yet strangely it seemed that the Tipperary players had to fouled two or three times before a free or advantage would be given. 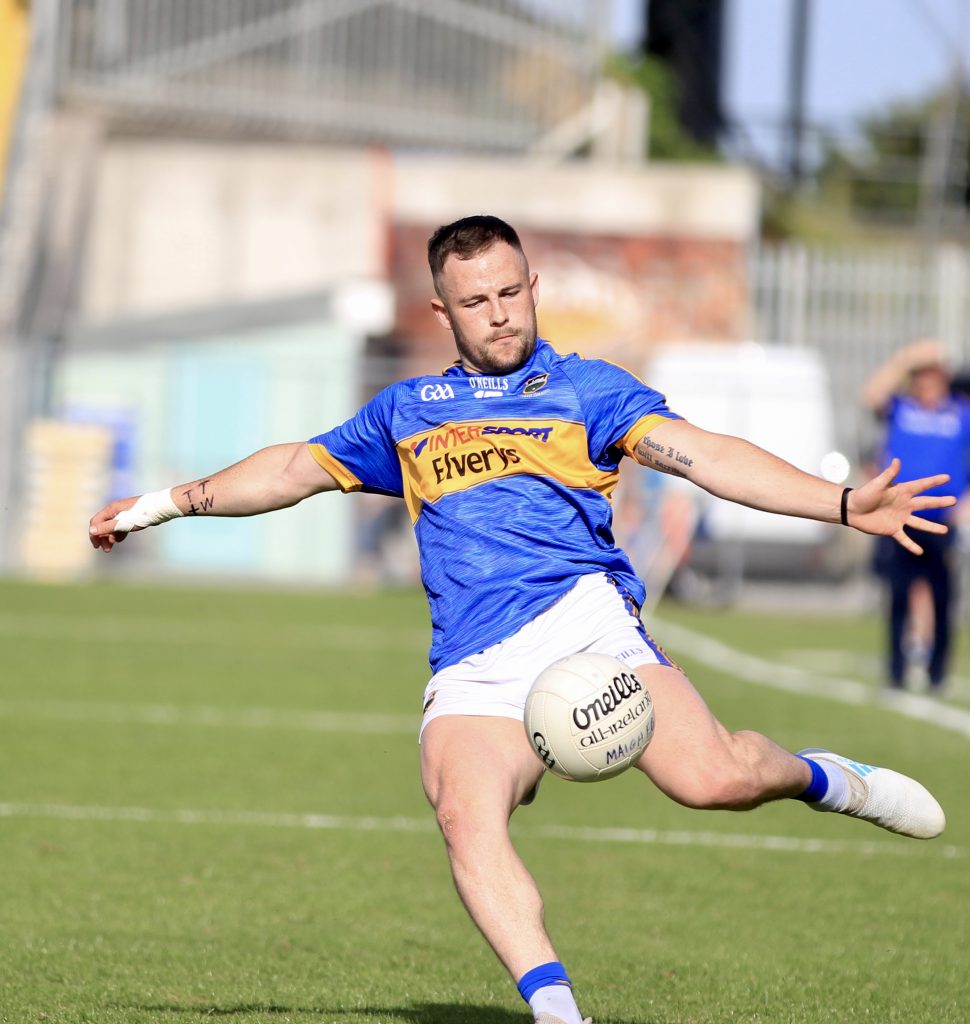 Bill Maher and Brian Fox in particular are the best players on show in the opening period. Time and time again the took the fight to Mayo but on a day as warm as yesterday one wondered how long they could keep that pace up. Our decision to concede the Mayo kick out in order to have numbers behind the ball, was a tactic that worked well but it also sapped the energy because as every small boy and girl knows, it’s easier play with the ball that without it and we possibly could have pushed up on one or two just to give Clarke something different to think about.

Liam McGrath and Conor Sweeney add points and McGrath got his second of the day shortly after a brilliant David Clarke save denied Quinlivan his second goal. Shortly before half time, a brilliant catch and turn and shot by Quinlivan keeps the Hawkeye man in gainful employment and he signals his approval with a Tá. 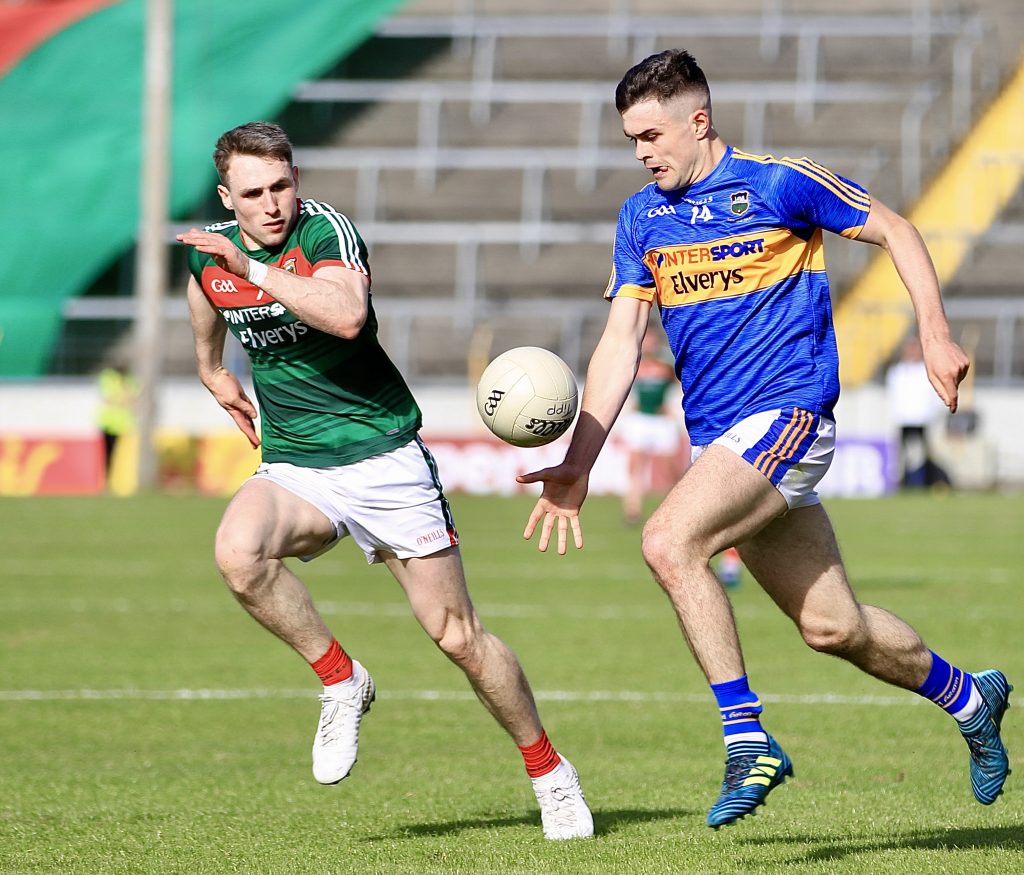 As we approach the tea break, Colm Clarke body checks a Robbie Kiely run for a text book black card offence but amazingly while issuing the black card, Maurice Deegan doesn’t award Tipp the free but opts to throw in the ball instead.

And so and eventful and brilliant first half ends with Tipp leading 1-07 to 0-08. 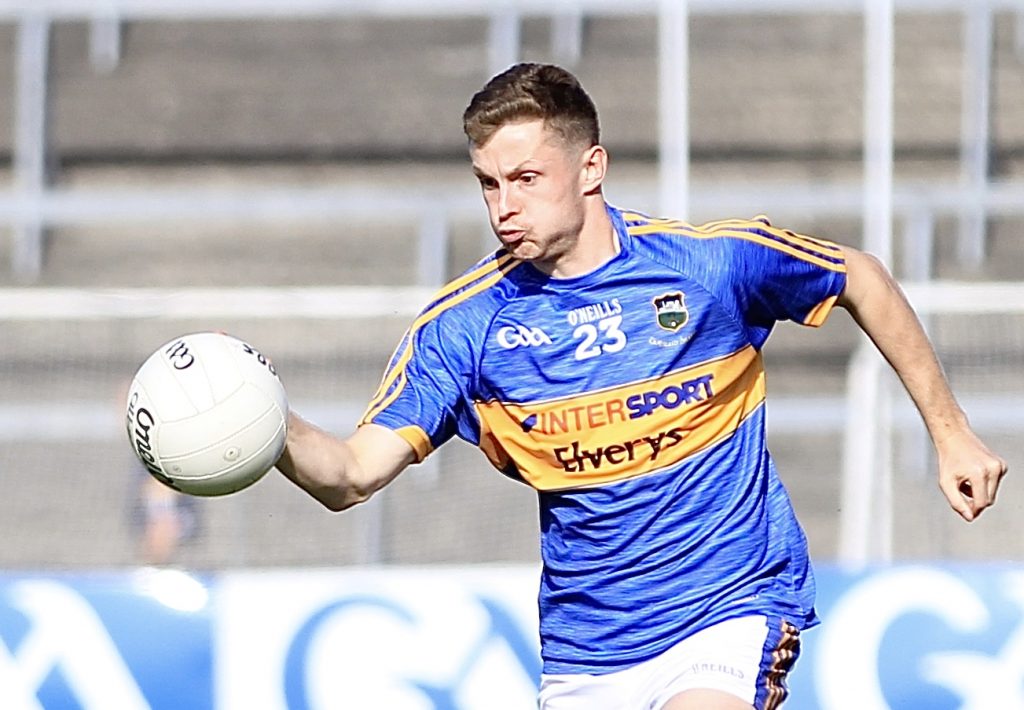 Half Time at a Tipp match is a great place to eavesdrop in on conversations. I overheard Tipperary fans expressing worry about our energy levels. Others worried about a few sloppy wides we had and hoped they would come back to haunt us while almost everyone worried about how hard we had to work to be awarded a free. We seemed to worry about everything other than Mayo! And rightly so I believe. Tipperary don’t need to bend the knee to any team and the first half had proved that they could stand toe to toe with the best.

Mayo were quickly out of the blocks in Act 2 and were level within a couple of minutes. Tipperary’s response was swift and brilliant. Points from Quinlivan, Sweeney and McGrath had us three in front with a little over fifteen minuets to play. 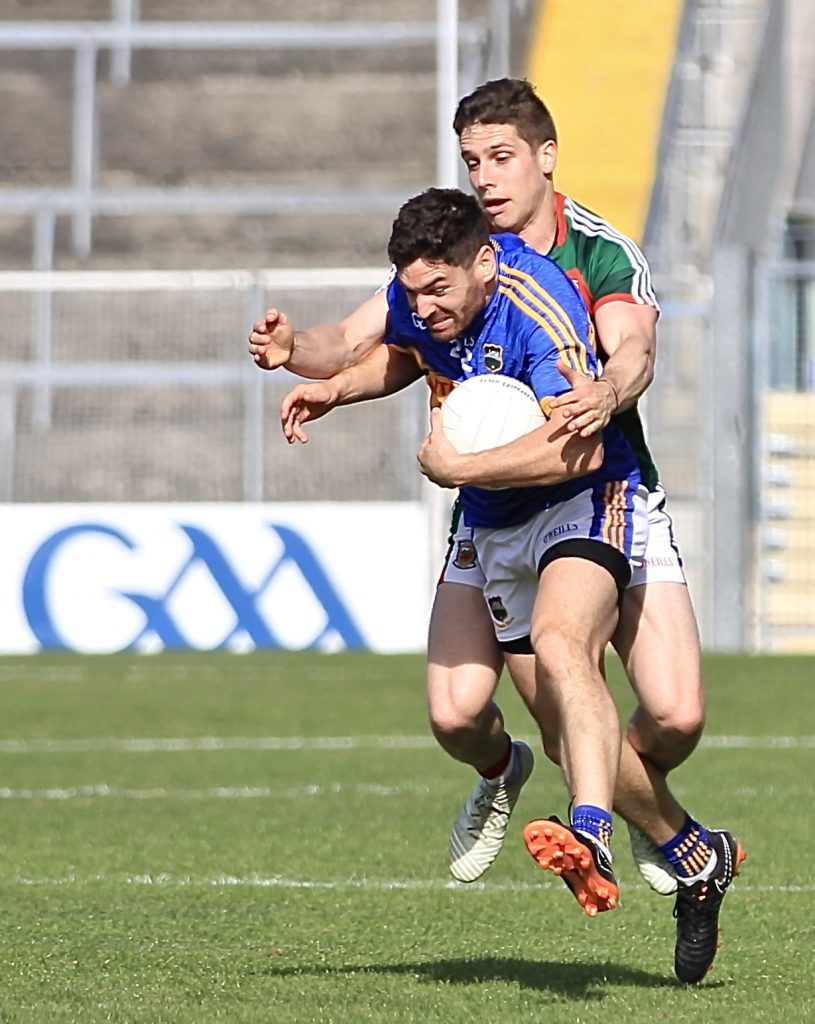 And then came the turning point of the game or if you like the turning goal. There seemed to be little danger when James Durcan collected the ball. Even James wasn’t confident that there was anything on. He hit a half hearted shot more in hope than in expectation and amazingly it dropped into the far top corner of the net.

Napoleon said his most formidable opponent was a general called Luck. Yesterday in Thurles, the Tipperary footballers were defeating all before them until the came up against General Luck.

The Durcan goal seemed to collectively suck the life out of the Tipp players and crowd and from there to the end of the game Mayo bossed the proceedings and ran out eight point winners on a score line of 1-19 to 1-11. 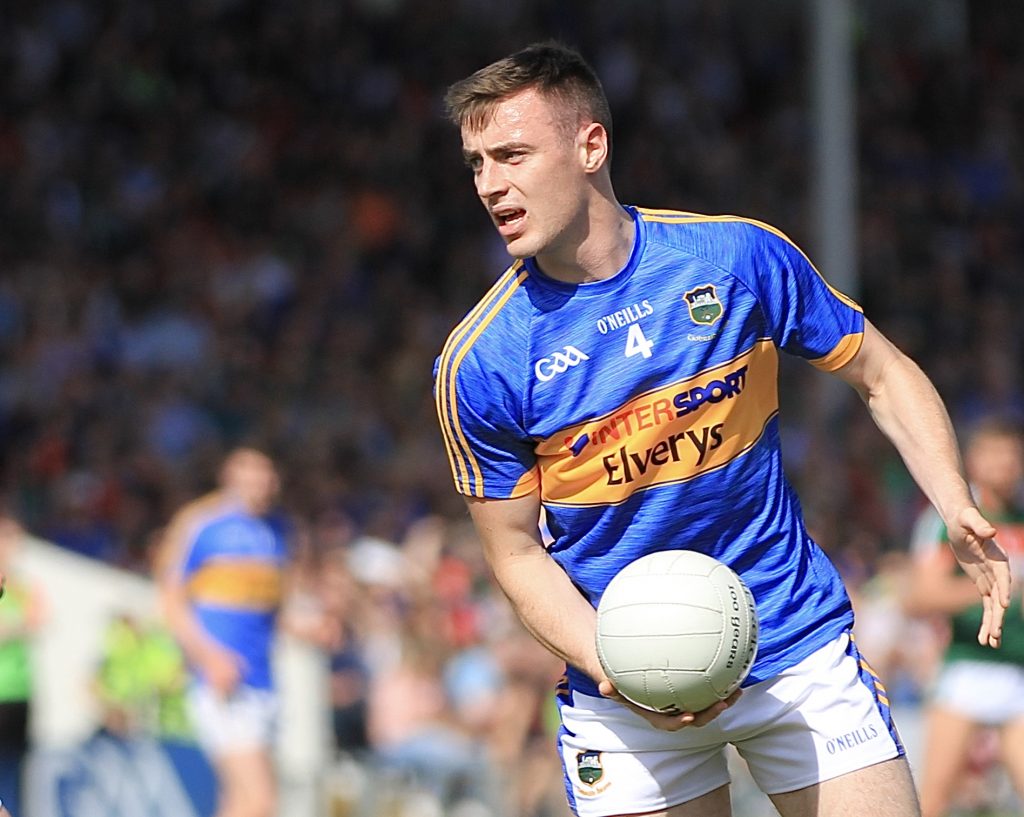 And so the Tipperary football year is over. Like the ancient mariner I suspect Liam Kearns came away from Thurles yesterday a sadder but wiser man. Sadder because the 2018 targets weren’t achieved but wiser because the way he set up his team yesterday made us tighter at the back and with better and quicker transition of the ball from defence to attack, he knows that we are now capable of competing with the best. 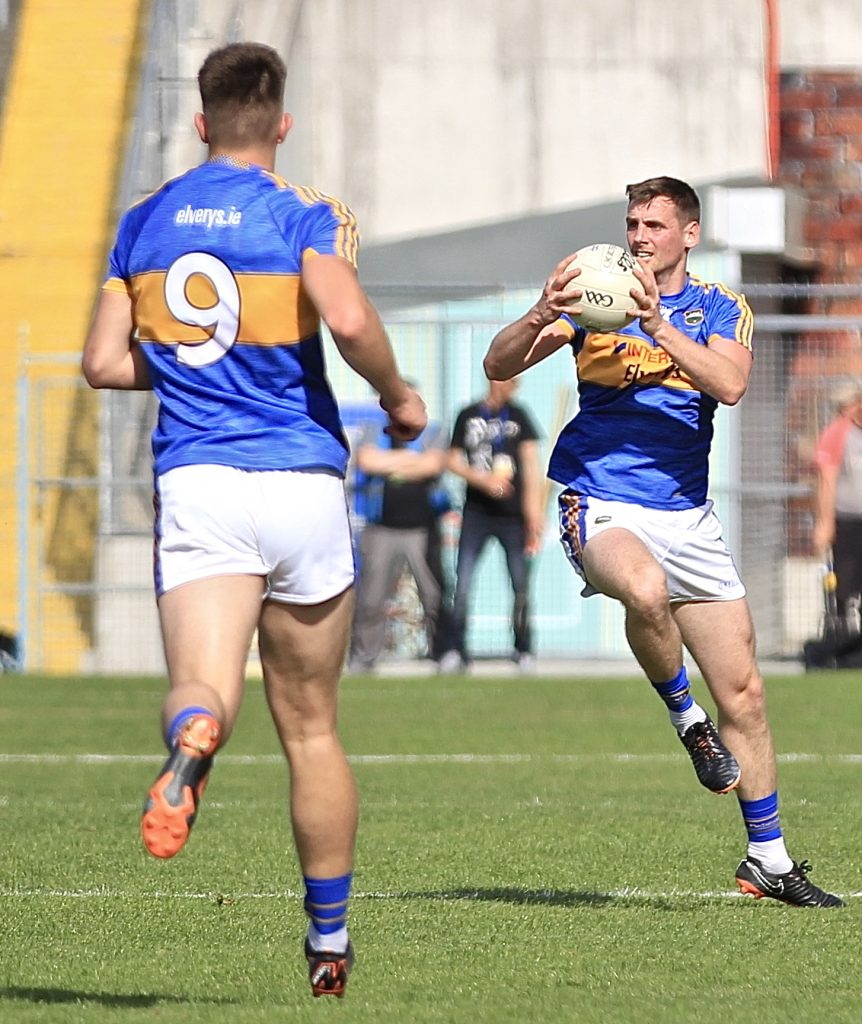