Such was the haze of goodwill around the county for Grangemockler that on my journey to Clonmel Sportsfield for the County Intermediate Football Final, I thought I’d have to put the fog lights on.

100 years on from the murder of Michael Hogan in Croke Park, the stars seemed to be aligning all year for Grangemockler to win a county final.

But both the Gods who govern Gaelic Football and Rockwell Rovers had other plans.

A good friend of mine tells teams that he coaches “every game starts with a throw-in. Win it or kill it”.

Rockwell won it, Grangemockler didn’t kill it, and 20 seconds later, TJ Ryan is running at the Grangemockler defense and popping a lovely floated hand pass across the goal for Eoin Byrne to tap to the net. 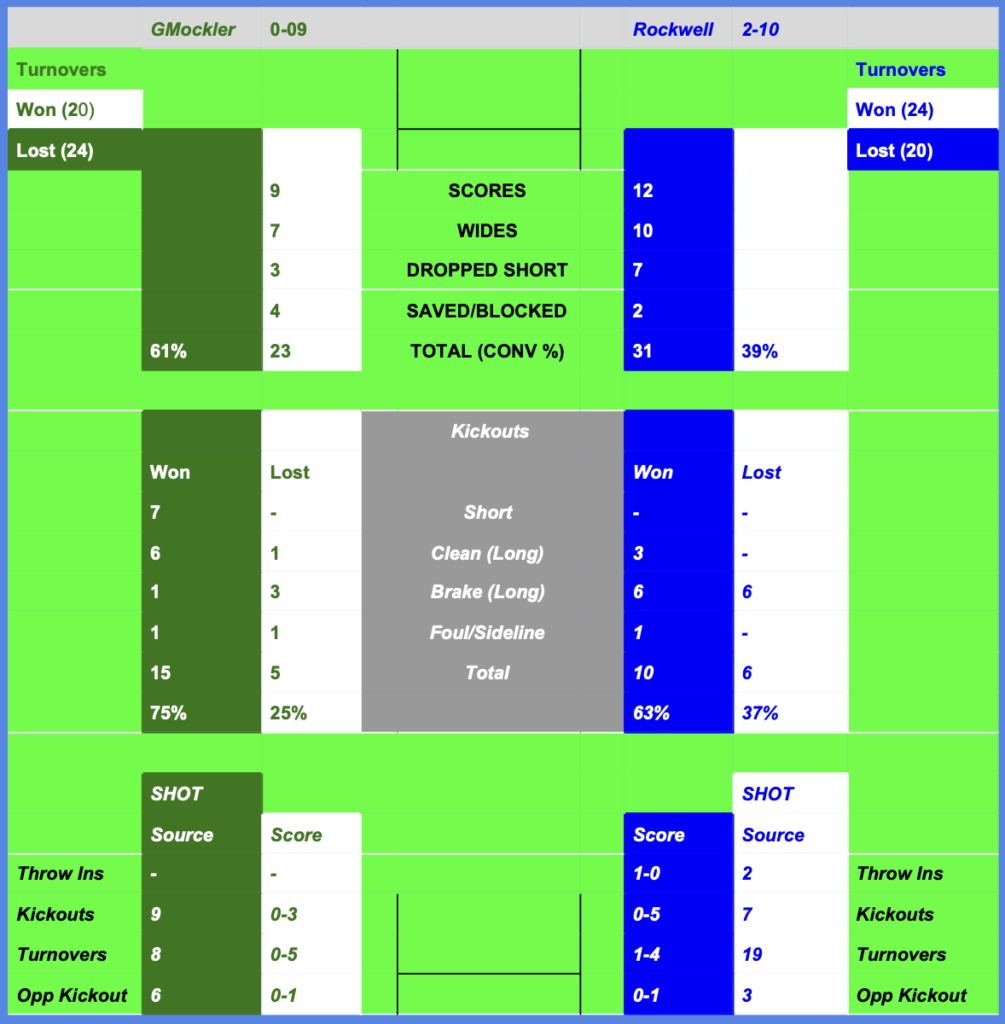 It was an early body blow for the South team, many of them who looked so young and light you’d say, if they were jockeys they would be entitled to claim the full allowance.

To their credit, they put it behind them and settled into their game. A John Lyons free opened their account in the 2nd minute and already we could tell that we were in for an enjoyable game between two teams who had come to play ball.

Alan Moloney marked a beautiful pass from Gavin Ryan for a point in the 5th minute before Mark O’Meara replied 2 minutes later with a monster kick from down around the Aldi car park.

Kerry’s Dick Fitzgerald wrote one of the first coaching books on Gaelic Football. The title was simply “How to Play Gaelic Football”. In it he wrote, “a goalkeeper might have little to do but he must do that little well”. 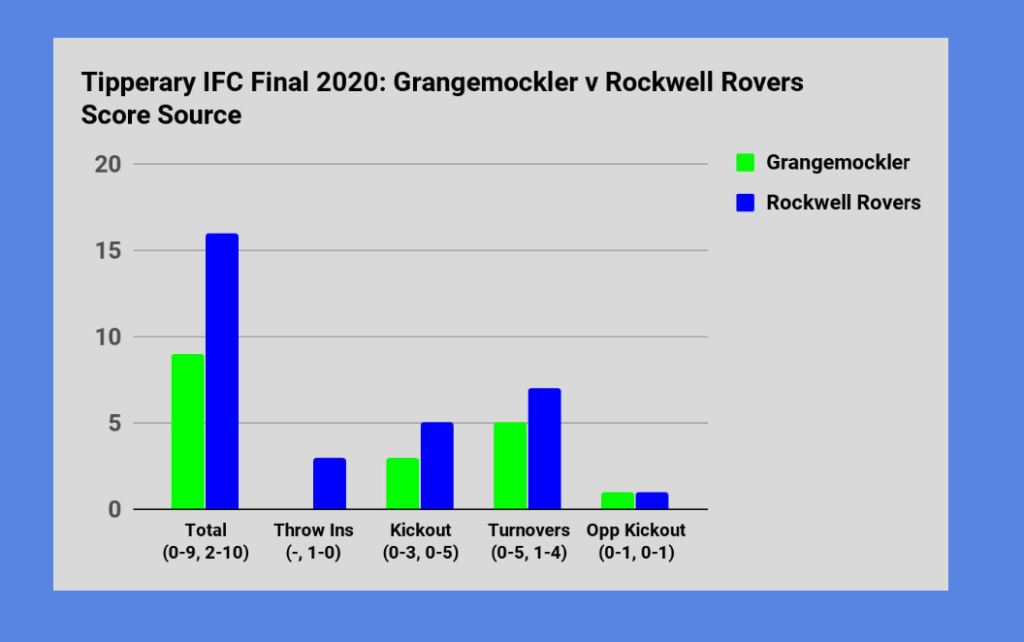 In the 8th minute, Rockwell keeper, Michael O’Donnell saved brilliantly from Manus McFadden and one minute later the Grangemockler keeper, David Power produced an equally good save from Gavin Ryan. Dick Fitzgerald would have approved.

The contrast in styles was fascinating.

Grangemockler were playing a short passing running game but displayed a weakness for going down the middle when they might have been better served to keep it wide and try to drag the Rockwell defenders out of position. It was common to see them work the ball to the 45m line only to find themselves surrounded by two or three Rockwell defenders and end up getting good possession turned over. By the time the first water break arrived, they had lost possession on 12 occasions, two of those turnovers resulted in points for Rockwell. 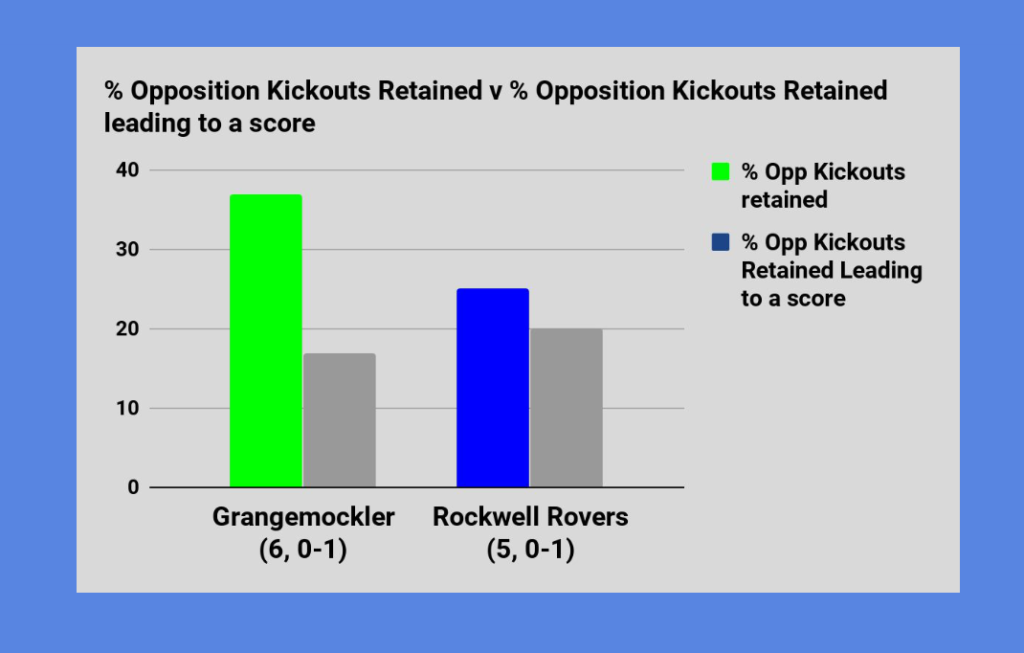 If the term “end to end football” didn’t already exist, we would have to invent it. When Michael Cusack fused the best aspects of soccer and rugby into a new game, which he would call Gaelic Football, I have no doubt that this was the type of game he dreamed of.

John Lyons (2 frees) Manus McFadden and Colin O’Shea swapped points with Eoin Byrne, Alan Moloney and Gavin Ryan and as the teams headed for their half time Jaffa Cakes, Rockwell led 1:06 to 0:06.

The half time stats showed that Grangemockler’s excellent kick-out strategy saw them retain 78% of their own kick-out and by pushing up on the opposition and forcing them long, they had managed to win 50% of the Rockwell kick-out. Rockwell on the other hand were gaining most of their possession from turnovers and were using that possession more economically than their opponents. They were now in a happy position. They led by 3 and would have the wind in the second half. 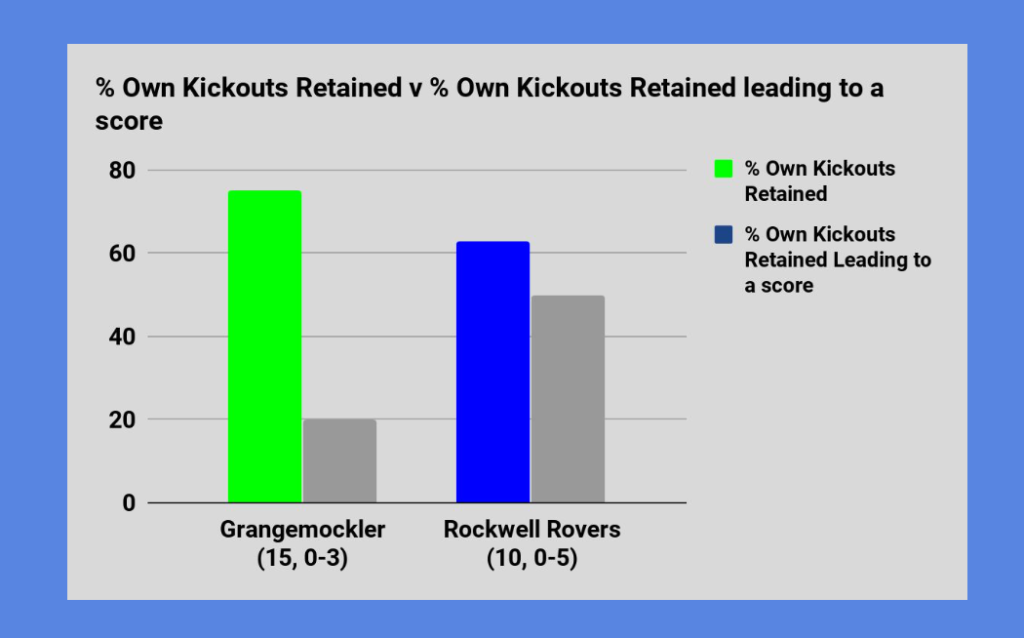 TJ Ryan extended their lead in the 35th minute and then 3 minutes later, in an almost identical play to which we saw in the first half, Gavin Ryan, with William Tell like accuracy, found  Alan Moloney and Moloney calmly slotted to the net.

2.07 to 0.06 and one felt that the stage was set for Rockwell to moonwalk to the finish. Grangemockler may be a young team but what they lack in experience they make up for in talent and honesty. Mark O’Meara pointed his second of the day from out in the countryside while Rockwell keeper, Michael O’Donnell, again had to be on his toes to keep a Sean Daly shot from hitting the net.

The first minute after the water-break decided the outcome of this game once and for all.

John Lyons was appealing to the Court of Human Rights that he was entitled to a penalty for a foul he claimed took place inside the box.  Rockwell lodged a counter appeal claiming that Lyons had picked the ball off the ground and therefore they should be awarded a free out.  Referee Philip Kelly settled the case on the steps of the 13m line and awarded Lyons the lesser amount of free in. Lyons accepted the decision and tapped over the free.

Grangemockler got their hands on the kick-out and a brilliant move involving Manus McFadden and Thomas Dineen released John Lyons but his low shot went millimeters wide of the keeper’s left-hand post.

You immediately felt that was that for Grangemockler and so it was. From here to the finish Rockwell were comfortable. They were happy to sit back, soak up the pressure and hit on the counter. It was a tactic they executed brilliantly and which saw them add two late points from Alan Moloney and TJ Ryan. They could even afford to miss a late penalty before Philip Kelly signaled full stop with the scoreline at 2.10 to 0.09.

And so Rockwell Rovers are back in the senior football ranks for the first time since 1992. Their victory last Saturday is all the sweeter because of that long absence and performers like sublime Alan Moloney, the magnificent Liam Fahey, hardworking midfielders such as Aidan Barron and Eoin Shine plus forwards like Eoin Byrne plus TJ and Gavin Ryan, will all be welcome additions to senior football in Tipperary next year.

A delighted and emotional 'Player of the match' Alan Moloney of @RockwellRovers speaks to @StephenGleeson_ at the full time whistle as they are crowned county champions! #GAA #Football pic.twitter.com/jQhmS2qKe9