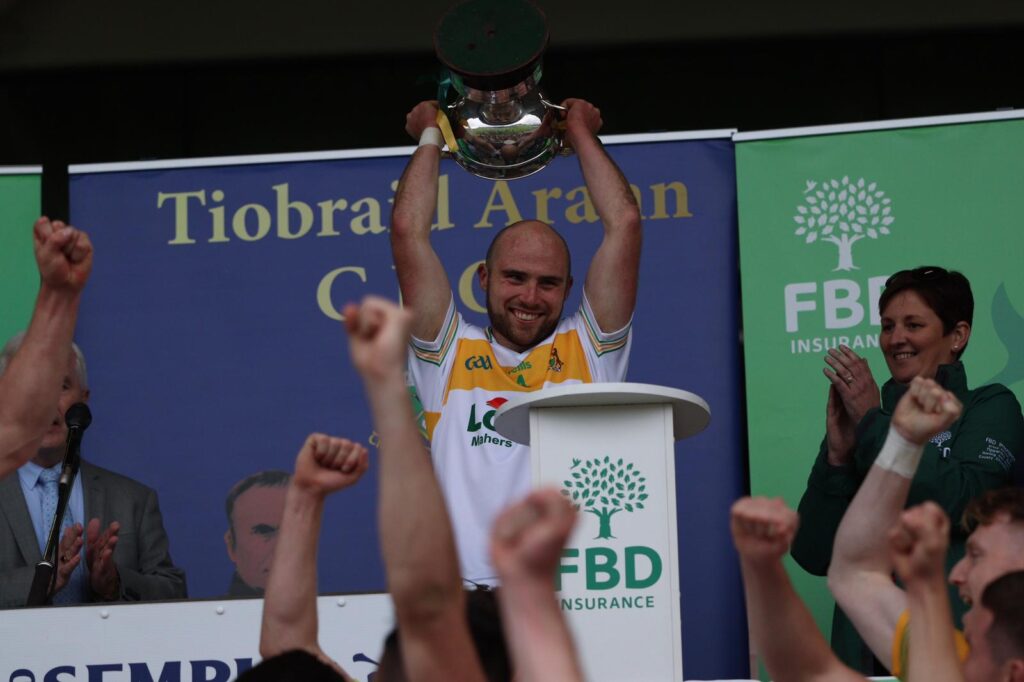 Every small boy and indeed every small girl loves a story of battle and adventure. Throw in excitement, anxiety, hairbreadth escapes together with heroic interventions and you have the makings of a classic. The FBD Insurance Tipperary Senior Football County Final 2020 produced all of that and more.

If the Irish Hospitals weren’t so busy with the Covid pandemic, cardiac surgeons would be rushing to Loughmore-Castleiney this week to mend broken hearts.
For the second time in 7 days, they lost a county final by the minimum margin as Clonmel Commercials claimed the Golden Fleece and never was it harder earned or more gloriously won. 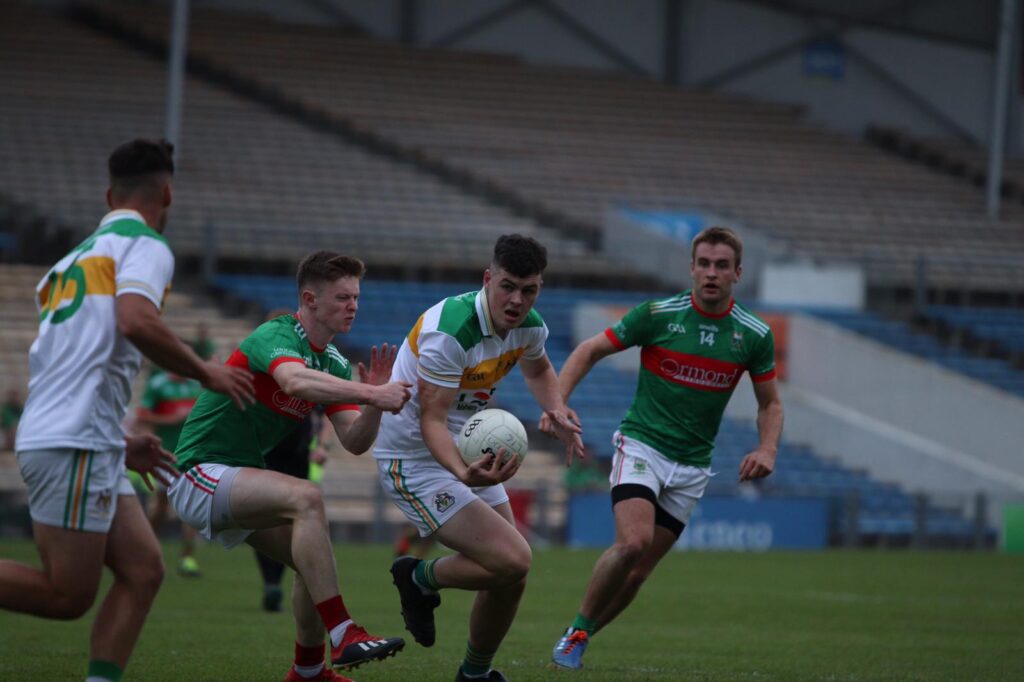 Loughmore-Castleiney stated Act 1 well. Conor Ryan opened their scoring after 50 seconds. 90 seconds later Ciaran Connolly put them 2 up before Joey Nyland added another in the 5th minute. It was a devastating start from the Mid men and put any doubts of a hangover from the hurling final to bed.

Clonmel Commercials, who had barely felt the weight of the football in the opening minutes finally began to settle. Jason Lonergan, Jack Kennedy and a trademark point from out in the country by Seamus Kennedy saw them level at 0:03 apiece on the 10-minute mark.

Before referee Seanie Peters issued the SOS for water after 15 mins, Ryan Lambe and Jason Lonergan (free) swapped points with two Conor Ryan frees to leave the score at 0:05 each.

The texture of these early exchanges was smooth. Both teams had come to play football and possession was as precious as a No 1 vote in a marginal constituency.

To that end, possession from kick-outs was quickly becoming the story of this game. In the first quarter, 4 of Clonmel Commercials 5 points had come directly from kick-outs while 2 of Loughmore’s 5 points also came from that source. Indeed before the game was over Commercials scored 1.12 from 22 kick-outs won while Loughmore also won 22 kick-outs and scored 1:09. Those stats are the reason modern-day managers put so much emphasis on the kick-out.

A transformation took place during the water break and if I didn’t know the Commercials kit-man Dan McMenamin to be an honest man, I would suspect he had put something in the water.

Commercials emerged and started playing football as if they had learned it from the pages of a comic magazine. Jason Lonergan tapped over a free in the first sentence of the second quarter after Seanie Peters spotted an off the ball incident right in front of the Loughmore goal.

Jack Kennedy, who was now beginning to make a clearing in the midfield forest, won the kick-out and fed Michael Quinlivan who slalomed his way through the Loughmore defence before producing a brilliant save from Shane Hennessy but he was fouled in the build-up and Sean O’Connor popped over the free. 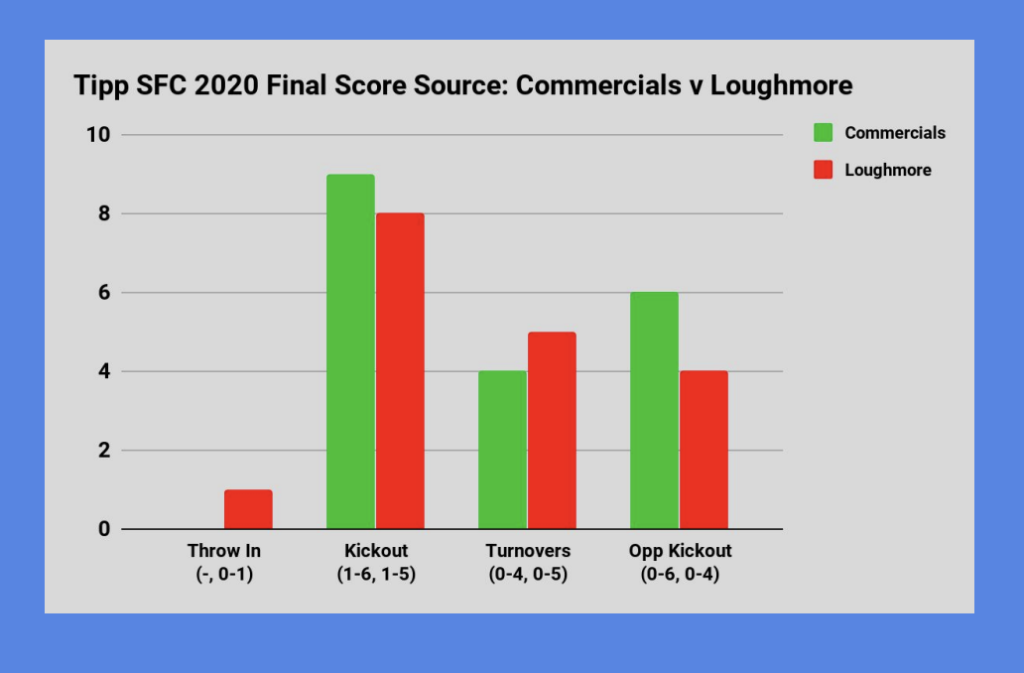 Loughmore insisted ongoing long with the next two kick-outs. Commercials won them and Colman Kennedy and Seamus Kennedy added points before that Prince of Precision, Jason Lonergan slotted another on 20 minutes. 5 minutes later a Sean O’Connor free made the score 0:11 to 0:05.

Loughmore now needed a score as badly as a woman needed a hairdresser during the lockdown and Aidan McGrath obliged on 27 minutes. Conal Kennedy replied 2 minutes later with the point of the half after a patient build-up.

A Conor Ryan free followed by a point from Michael Quinlivan brought a fascinating first half to a close with Clonmel Commercials leading 0:13 to 0:07.

During the tea-break, we all agreed that the stage was now set for Clonmel Commercials to moonwalk to the finish. But Bill Shakespeare was right when he said “the fool doth think he is wise”. We were writing off Loughmore without taking account of their fighting spirit but more importantly their footballing ability. 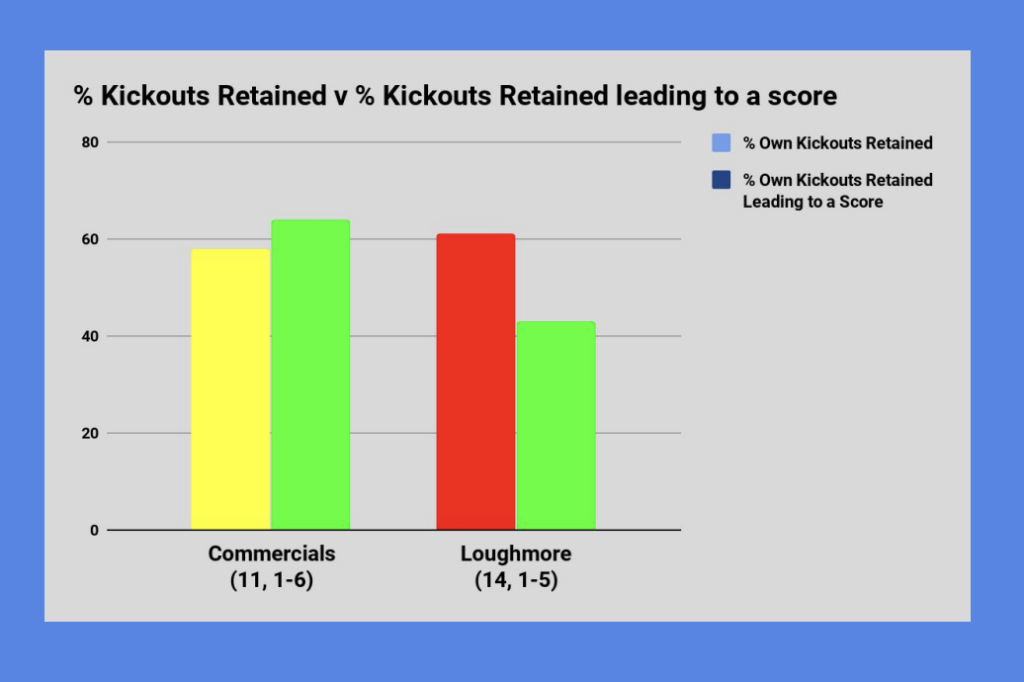 One minute into the second half, Noel McGrath pulled a kick-out from a low flying crowd and punted it straight into the full-forward line. Ciaran McGrath combined with Evan Sweeney to release Conor McGrath whose right-footed shot roared into the roof of the net. GAME ON!

Liam Treacy, who over the years has always tormented the Commercials defence, was sprung from the bench at the end of the first half and had an instant impact. He provided the width that was lacking from their attacks in the 2nd quarter and on 34 minutes he cut in from that wide position to reduce the Commercials lead to two points. 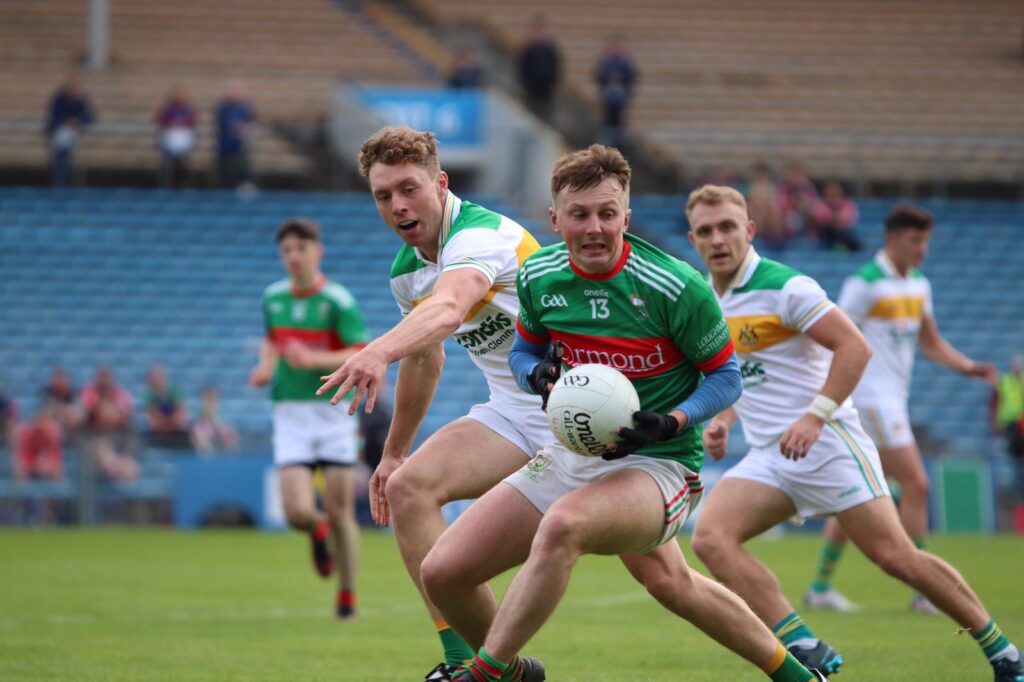 An outrageous effort from 21 yards from Michael Quinlivan produced another great save from Shane Hennessy and Lonergan soccered over the rebound. Conor Ryan replied after more good work in the build up from Liam Treacy.

Lorgan Egan looked to have the goal at his mercy on 41 minutes but was disarmed before he could pull the trigger by a brilliant Seamus Kennedy tackle and the danger cleared. When the scores were totted up later in the day it would prove to be a vital interception from Kennedy.

Points from John McGrath and Evan Sweeney leveled up the game as Loughmore took complete control before a Sean O’Connor free brought us to the second water break on a scoreline of Clonmel Commercials 0.15 Loughmore 1.11.

It is hard to explain the Commercials collapse in that quarter. Maybe the brilliance of their second-quarter fooled them into a false sense of superiority and they had decided to clock out for the day just as the Loughmore-Casleiney lads were showing up for work. 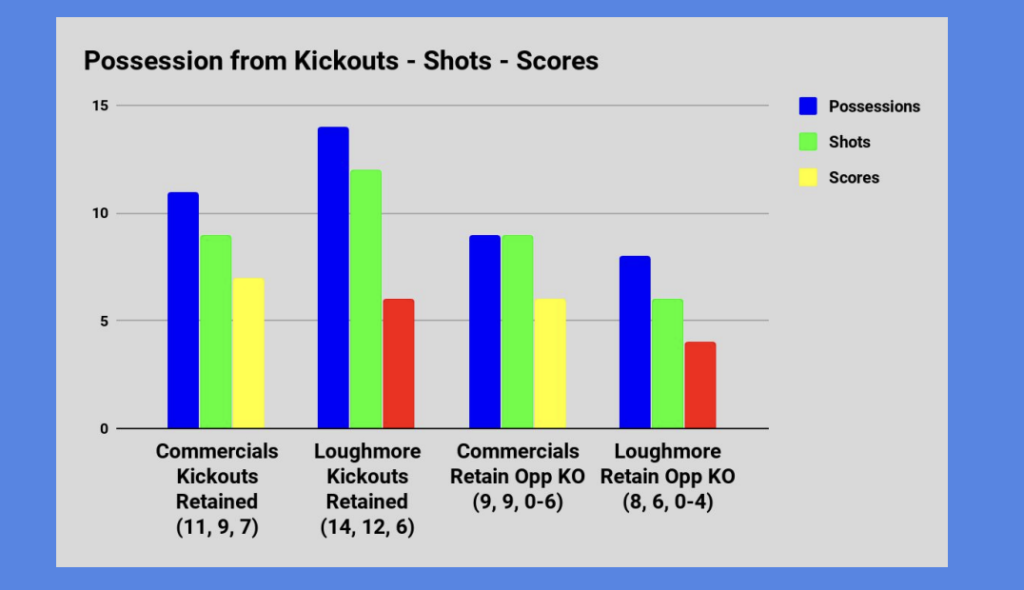 Points from John McGrath and Joey Nyland saw Loughmore edge to the front before Michael Quinlivan scored possibly the greatest goal ever scored in a county final. Seamus Kennedy fed Quinlivan on the 65m line in the shadow of the old stand. All the defenders were present and correct and the danger seemed remote. Quinlivan turned and glided at pace towards the Loughmore goal. From the moment he turned he was in full control of what he was doing before finishing to the front of the net with the outside of his right foot. It was an amazing piece of athleticism and skill from Quinlivan. You just can’t regulate genius!!

Commercials were now two points up with just 7 minutes to play but Loughmore were not beaten just yet. Conor Ryan and Evan Sweeney leveled things up again as we headed into abnormal time.

If Quinlivan’s goal was the greatest ever scored in a county final, then Jack Kennedy’s point was one worthy of winning a county final. He started and finished the move. He found a parcel of space and kicked one of those softly struck middle distance points that has become his trademark. 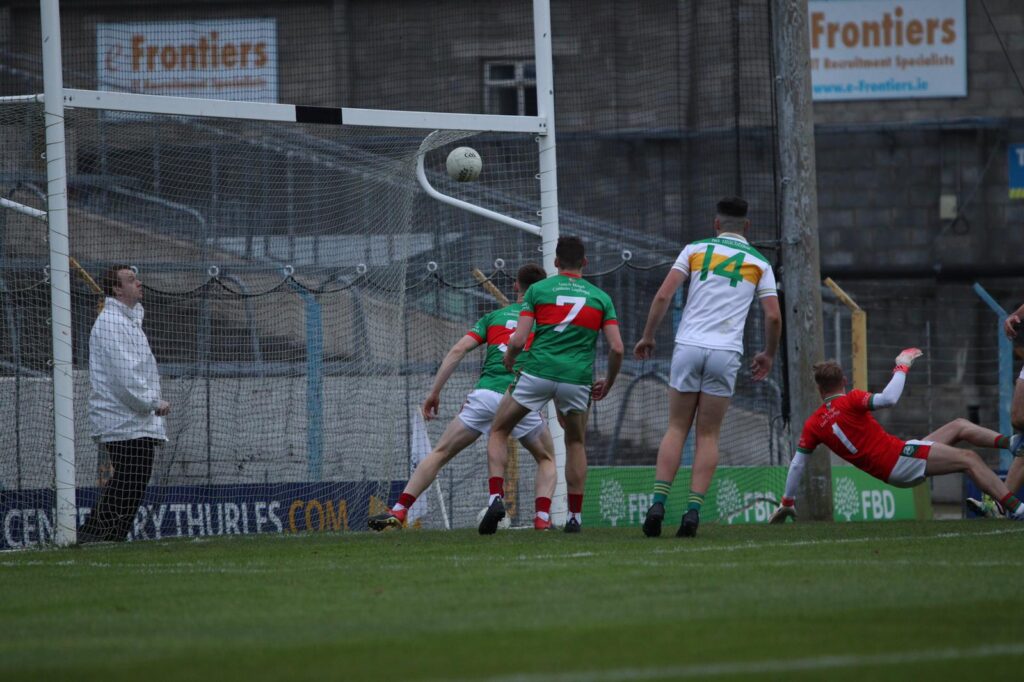 And so ended one of the most exciting football finals in living memory. For many of this Clonmel Commercials team, it was their fifth county medal in 9 years. That is a record-equalling haul in Commercials and looking at the age profile of the team, you would have to think there might be more on the way.

For Loughmore-Castleiney who all season were chasing the hurling and football double, they ended up all too aware of the frustration the Greek God, Tantulas had suffered. You will recall he was made stand in a pool of water beneath a tree whose low lying fruit was just out of his reach and the water he was standing in was always receding before he could take a drink.

It is a game that will be analysed all winter wherever football people meet.
It was an absolute privilege to be present to watch these two wonderful sides produce yet another outstanding game of football.

We don’t realise sometimes how lucky we are in the GAA.

We get all this and heaven to come.

I know it won't be much consolation at the moment but Loughmore/Castleiney will be remembered for playing their part in two of the best County Senior Finals in living memory in 2020.
They might not have silverware to show for it but they are winners in everyone's eyes.

A moment’s silence at Parnell Park before the #DSFC1 Final in remembrance of those who died on Bloody Sunday. pic.twitter.com/BSsil4atZE

Well done to @CommercialsGAA County Senior Football Champions, it was a brilliant game u would feel sorry 4 @Loughmore_Gaa I have no doubt they will be back!
was good to be part of the @TippFMSport team today with Micheal Webster @StephenGleeson_ @goldenstapo @TippfootballGAA 🏆 pic.twitter.com/FKT3uQ8GVm

Manager Frankie mcgrath of @Loughmore_Gaa congratulates Commercials after the game. Extremely gracious in defeat but warns they'll be back next year to have another go pic.twitter.com/LMu0ZN3M3z