After spending 90 minutes slogging it out in the servants quarters, Tipperary earned the right to dine at the top table in a Munster Senior Football final on Bloody Sunday weekend where they will wear a replica of the famous green and white Grangemockler jerseys worn by Tipperary on that fateful day in Croke Park 100 years ago. 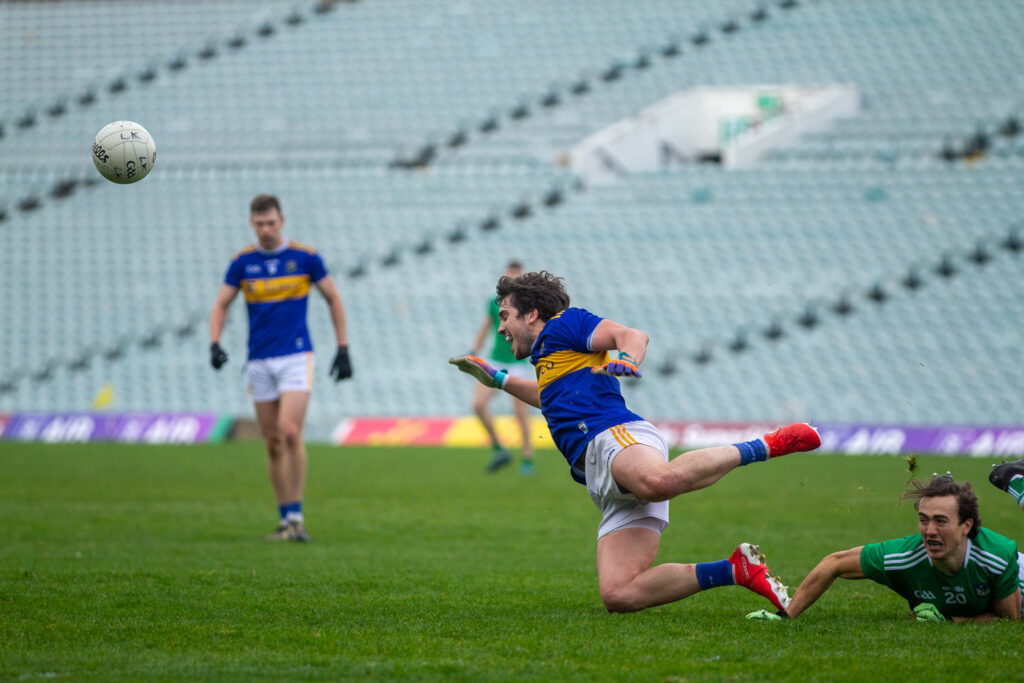 You couldn’t call this a great game but yet it had some great moments in it. Conor Sweeney channeling his inner Maurice Fitzgerald to rescue a draw in normal time and Brian Fox kicking the brilliant winner in abnormal time are two moments that will live long in the memory.

The action in the first fifteen minutes was so dull that by 1:30pm Lucky had given up and decided looking out the window at a cat on the back wall was far more interesting.

Two Conor Sweeney frees and another from Jack Kennedy was all Tipperary had to show after the first seventeen minutes when they went in at the water break 0-3 to 0-4 behind.

Limerick had come with a game plan to set up defensively and hit Tipperary on the break and it was working. Despite having the lions share of possession, time and time again Tipperary found themselves facing a thirteen man defense. Tipperary did what you should do in this situation and remained patient rather than kicking aimless ball into an outnumbered full-forward line.

However, far too often when the opportunity presented itself for a shot, we pondered, got turned over and because our forwards are lovers, not fighters, Limerick were able to break out at pace and often unopposed. 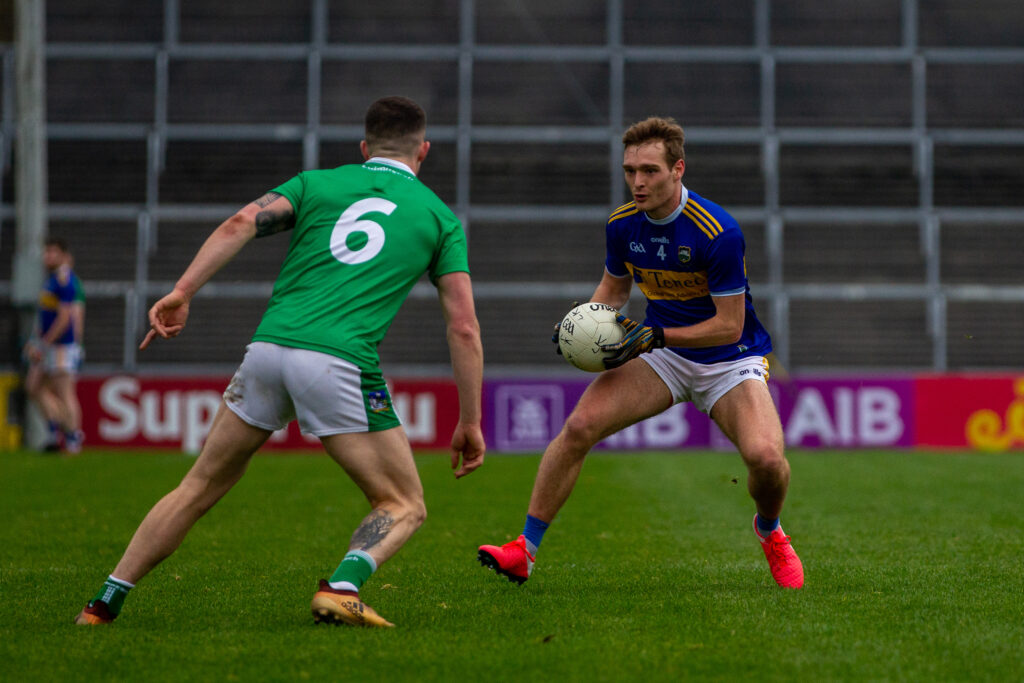 Tipperary’s hesitancy in possession came back to haunt them in the second quarter. Tipp dallied on the ball and were hit with a bolt from the green. The ball was turned over and Tommy Childs swapped passes with Shane McSweeney who drilled low and hard into the middle of the net.

Five minutes later a cross-field ball from Tony McCarthy caught the Tipperary defense doing their best Rip Van Winkle impression and found Cillian Fahy who rifled to the top of the net.

It was hard to tell who was the most frustrated, Lucky because that pesky cat wasn’t moving or me because the Tipp team weren’t moving either.

At this stage of the game, our vital signs were not encouraging. We were struggling, winning just 42% of the total kick-outs in the first half, we were also behind on the turnover count and the most important stat of all, the scoreboard, saw us seven points down. 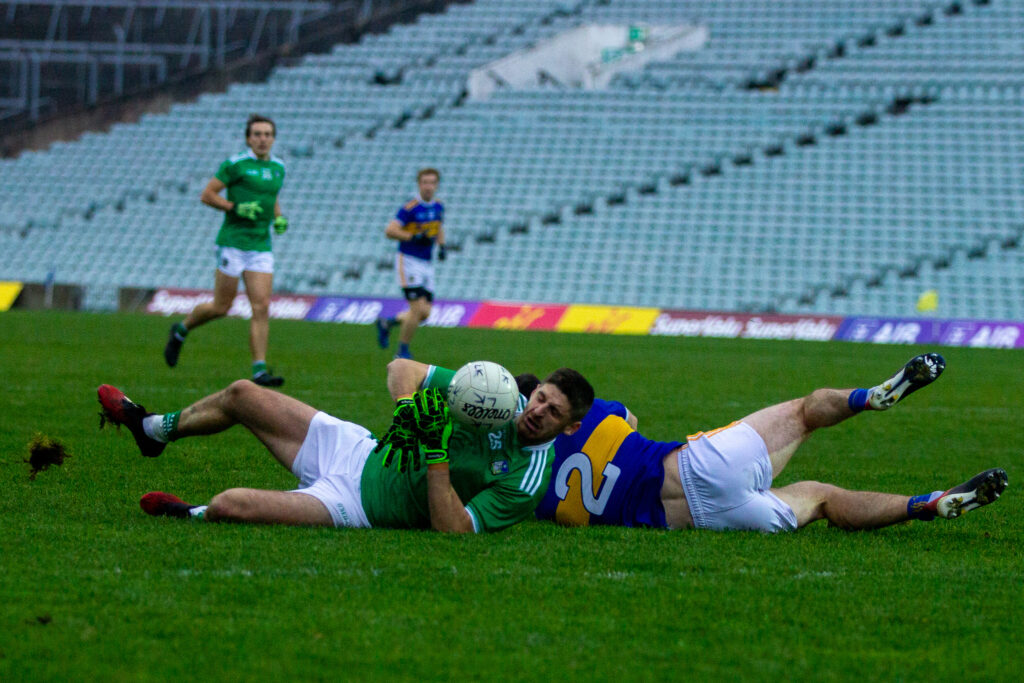 I have no idea what happened in the Tipp dressing room at half time but whatever was said, the next twenty minutes saw Tipperary bring about the most dramatic change in fortunes since Del Boy and Rodney cleared out the lock-up.

From the restart, Liam Casey and Conal Kennedy started to find clearings in the midfield forest. Our half-back line was now supporting with purpose and at pace and our forwards were beginning to find parcels of space.

Twenty action-packed minutes followed. Jack Kennedy reduced the lead to six with a free in the 37th minute. Conor Sweeney added another in the 39th. Kevin Fahey pinged one in the 41st. Sweeney added to the tally with a free in the 44th and followed that up with one from play in the 47th. Liam Boland reduced the lead to a point in the 51st minute before Liam Casey reacted first to a ball coming off the upright and finished to the front of the net in the 52nd. 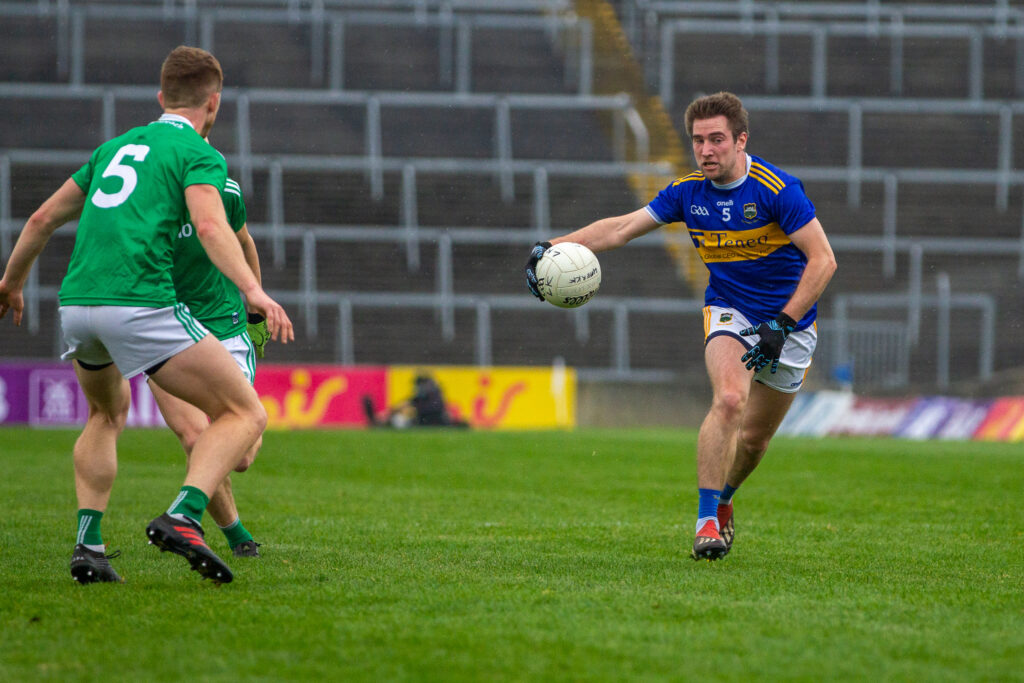 It was magical football from Tipp. 1-6 without reply and playing the type of football that would lead you to believe we might never see a poor day again. We went into the second water break two points ahead but once again there was something in the water.

The final quarter of this game was a struggle and was magnified by our failure to get our hands on kick-outs. Of the 43 kick-outs in this game, we only won seventeen. In our favour we had now gone ahead in the turnover count which is always a good indication of a team working hard even when things aren’t going as planned.

Darragh Treacy reduced the deficit to one before Hugh Bourke levelled the game on 61 minutes and things looked done and dusted for Tipperary when Cian Sheehan put Limerick ahead on the stroke of full time. 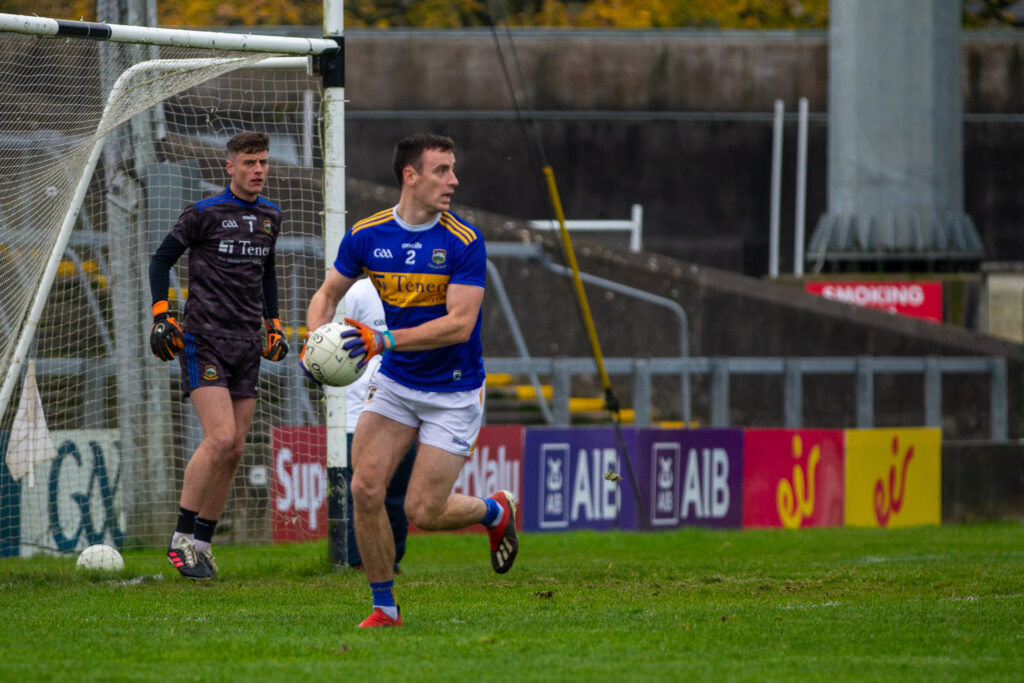 Then with the last kick of the ball, Conor Sweeney defied the accepted laws of physics when he pointed a free from the sideline with the outside of his left foot for a point that already has the “score of the year” title sown up. We will watch an awful lot of football before we see a better point than this again.

I immediately thought back to 2007 when 60 lads arrived in for county minor trials. All the selectors were given a team of fifteen. On my team was a tall skinny lad who started swinging over points from all angles. It wasn’t long before my fellow selectors asked who he was and I had to admit that I didn’t pay much attention to his name because when I saw the long shorts and white boots, I decided he probably wasn’t going to be cut out for inter-county football. Half time arrived and I asked him his name again. “Conor Sweeney from Ballyporeen” came the reply!! I’m reminded of it any time I get notions about knowing something about football!!

With the scores at 1-12 to 2-9, referee Maurice Deegan decided that everyone was staying on for compulsory overtime.

Liam Boland and Robbie Kiely added points but Limerick replied with two points of their own and could have put the game beyond doubt but Evan Comerford saved well when he charged down a Hugh Bourke goal attempt. 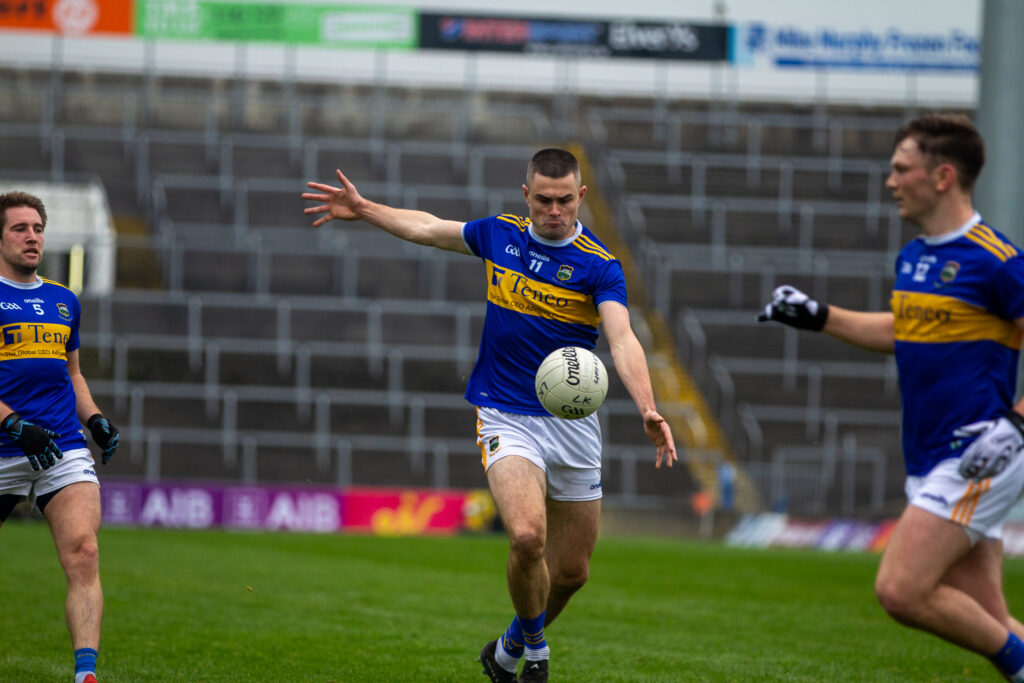 With the game heading for penalties, Brian Fox did what Brian Fox does and carried the ball from his own 45m line into the scoring zone before slotting over a beautiful winner with his right leg. It was a point that summed up everything about Fox. Brains to hold the ball, the athletic ability to carry it 50 yards, the composure not to panic and the skill to score it when the need was greatest.

Hearing the cheers, Lucky arrived back on the couch. He is obviously one of those fair-weather Tipp supporters who only watches when they are winning.

There was still time for Limerick to equalize but after catching a great advanced mark, Seamus O’Carroll blasted the resulting shot well wide.

Maybe just maybe, it was a sign that in this year of all years, our name could be on the Munster Senior Cup! 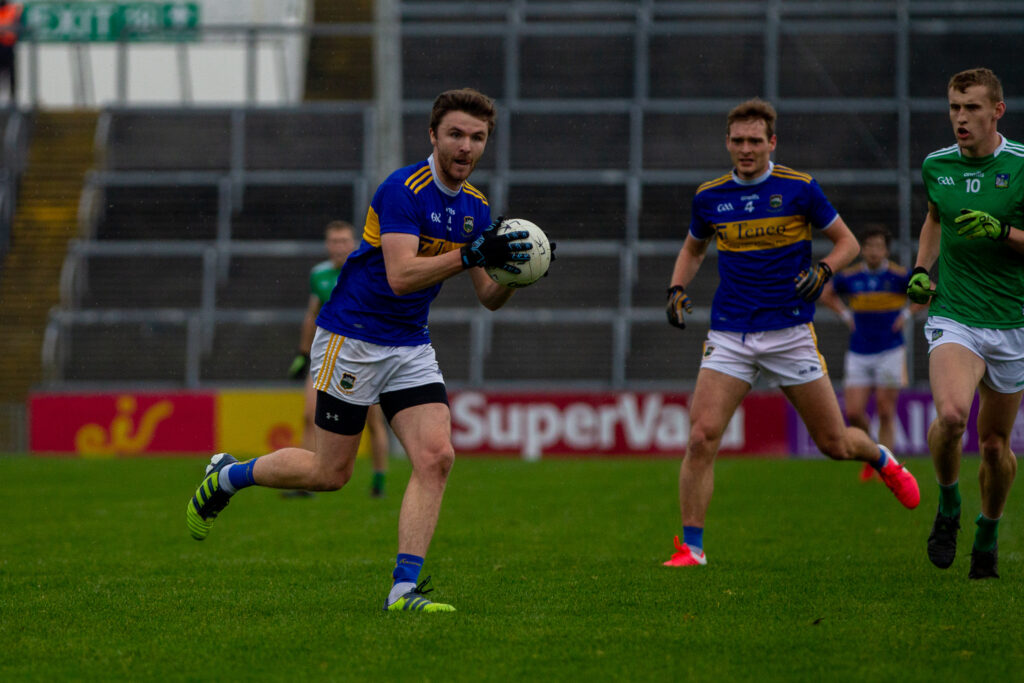