In 1918 Tipperary won the Munster football final following a 1-1 to 0-1 win over Kerry. The team had previously beaten Cork (1-5 to 0-2) in the opening round of the championship and later Waterford (4-4 to 0-0) in the Munster semi-final. Following their great win in Munster they then went on to beat Mayo in the All-Ireland semi-final before coming unstuck to the great Wexford side that won four titles in a row from 1915 to 1918.

Along the way they won four matches, lost one and scored in total 8-16 while conceding an impressive 1-12.

Here are the match reports from the Munster championship games against Cork and Kerry as well as the All-Ireland final against Wexford. 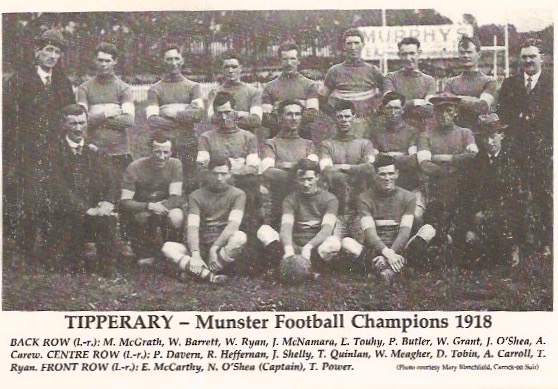 In Thurles enclosure on Sunday, in presence of a large gathering, Cork, who were opposed by Tipperary in the hurling and football round of the Munster Championship, suffered defeat in the double event. Cork’s football display was not at all equal to the form shown by Tipperary, who annexed the honours by 1 goal 5 points to two points for Cork. The hurling contest fought out with the utmost vigour from start to finish, but here again Cork had to concede the honours to a faster and better trained combination from Boherlahan. The final score was Tipperary, 7 goals 3 points: Cork, 6 goals 1 point.

The teams were Cork County Board selected and Tipperary County Board pick. They played under the whistle of Mr Albie Quinlivan, Limerick. The match began with Tipperary sending wide twice. Moore clearing splendidly one of the attacks. Tipperary attacked again, for Jackson to save smartly, but resuming the invasion Tipperary got through for a particularly soft point. Cork got possession the send out, and a neat bit of combination saw the score equalised, per Healy. The opening stages were so far good on both sides, with a further wide for Tipperary. Long field punting by Tipperary saw Cork posts in danger, for Jackson to again respond effectively in the defence. The next encounter was altogether in favour of Tipperary, and Tobin, who was beaten previously, landed a beautiful goal for Tipperary. Cork carried down from delivery, and a certain goal was very badly muffed. Tipperary came on once more and were beaten back by R. O’Connor but from the centre line Tipperary forced for McCarthy to raise the white flag and play now strongly favoured Tipperary, who pressed repeatedly, and rarely did Cork get an opening. Another fine defence by R O’ Connor having been witnessed. Cork got going to send over, and Tipperary carried down with a similar result. The half-hour was reached with Tipperary figuring conspiciouly in the picture and having a substantial lead.

Sheehan of Tipperary was the star turn of the match. The game was resumed with a free to Tipperary, and thanks to sound defence Tipperary had to retire, but quickly returned for Jackson to check a hard drive on the Cork net. At this stage Peter Hanlon, of the Cork side, had to go off hurt, and his place was taken by E. Heskin. On restarting Tipperary brought their full weight to bear on Cork backs, and in a tussle of brief duration Barrett had the white flag raised, giving Tipperary an additional point. Cork were next to attack, but no tangible impression could be made on the opposition, whose performance, taken all round. was distinctively good. After another vigorous encounter Cork came out better with a minor per Donovan. It was followed by a fifty taken by Moore, but it brought no advantage to Cork. Cork continued to show exceedingly poor form against Tipperary and when the full whistle went the score stood:

In the hurling encounter Tipperary won 7-3 to 6-1. 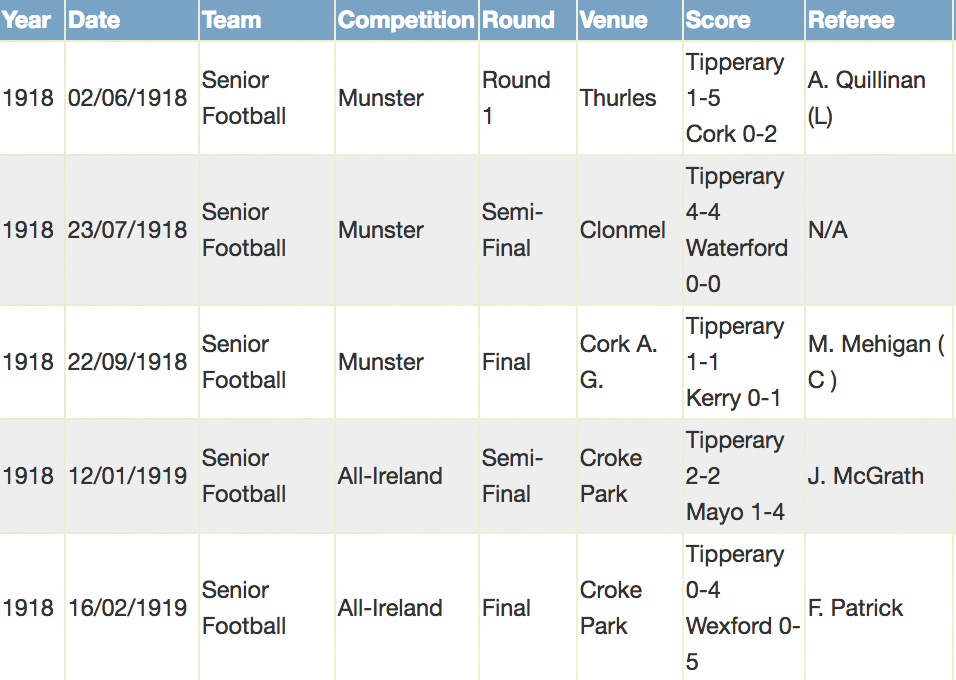 The football final of Munster was decided in the Cork Athletic Grounds yesterday in presence of a large gathering of spectators. Making no allowance for adverse weather conditions, notably the strong wind which militated against footballing, the performances of the finalists Kerry and Tipperary were not quite up to expectations. Rather were they much below the championship standard. The first half hour was exceedingly tame, but the concluding stages showed an improvement. The match was remarkable for the number of scoring opportunities that went without acceptance, the larger figure in this respect being on the Tipperary side. Tipperary, however, were the better fifteen right through the game, the details of which do not call for any deliberating. The half time register was Tipperary 1 goal, Kerry 1 point. Final score Tipperary 1 goal 1 point; Kerry 1 point.

Tipperary won choice of position and at once pressed to be sent back by Costelloe. The attack was repeated and aided by the strong wind, Tipperary got through for the opening score – a goal – which was secured by Grant. A nice display in the centre let Tipperary away to send wide. From the delivery Tobin headed a strong Tipperary assault and Quinlan supported the movement in fine style but overshot the objective. Pressing again, Tipperary tested but the opposing backs responded gamely and the leather was carried over. Donovan, Clifford and Hogan put Kerry on the move, but nothing eventuated. A couple of minutes later Tipperary got a free which was blocked but they still held their opponents’ ground, where Tipperary received another free arising out of a skirmish at the posts. No register was recorded, thanks to an excellent defence. After some bouts of open play, Tipperary were well away for Lawlor to frustrate very smartly. A clever display having been witnessed at the neutral line, Tipperary were given another chance by McCarthy. Mullins had, however, to be reckoned with and the result was a marvelously sound performance by the resourceful Kerry back. So far the game largely partook of frequent onslaughts on the Kerry net and the opportunities afforded the representatives of the “Kingdom” of getting outside their lines were few and far between. Having regard to the repeated attacks and corresponding advantages presented to Tipperary their scoring did notat all resound. In fact the forward line was decidedly off. After a considerable amount of defensive work Kerry secured possession to be beaten at the mouth of the net by Shelly. Keeping up the pressure, Clifford raised a white flag for “the Kingdom” and the short whistle went after a half-hour’s display which taken all round was not up to anything like championship form.

The resumption was marked by a couple of vigorous offensives on the part of the Kerrymen. The pressure and play was taken up the field where the Kerry posts stood in imminent danger for some moments. Tobin who had been closely watching his chance sent in a hot shot for a minor after which play was carried to Tipperary quarters and a good defense witnessed. The game had now become more interesting showed an improvement on the first half. Getting a shot from back inside Kerry lines the Tipperary advantage was nollified and their opponents were quickly operating at the other end. Here a grand opening was very badly missed, a possible Kerry goal having been practically thrown away. In the next stage Tipperary were penalised and play ranged along the right wing where Kerry with a series of long-field drives quite a battle royal was seen by the posts. The onsough was eventually checked, the defenders’ tactics being a prominent tenure in a decided stubborn tussle. Rain had now set in to the detriment of the game. Mullins as in the previous half-hour, was again bearing the brunt of the defensive and doing his work effectively. He brought off some telling saving feats. At seven minutes to go Tipperary lost the services of Quinlin the Clonmel player through accident and Kerry had to continue without the aid of C. Murphy who had previously similarly retired. The game proceeded with a quickened pace and occasional nippy footwork. Tipperary forwards, well supported by the centre-field men, succeeded in getting another footing within the opposing lines, but the only outcome was an over. A free to each side followed in close succession but the main position remained unaltered. A pretty liberal number of exchanges in the long field having been shared in an admirable passing rent was put in by Tipperary’s front rankers. The movement desperate to succeed but the finishing touches was lacking. Kerry made desperate efforts closing on full time to improve their poor position on the scoring sheet and when the long whistle went the one point made by Tipperary in this half-hour had not been improved upon. 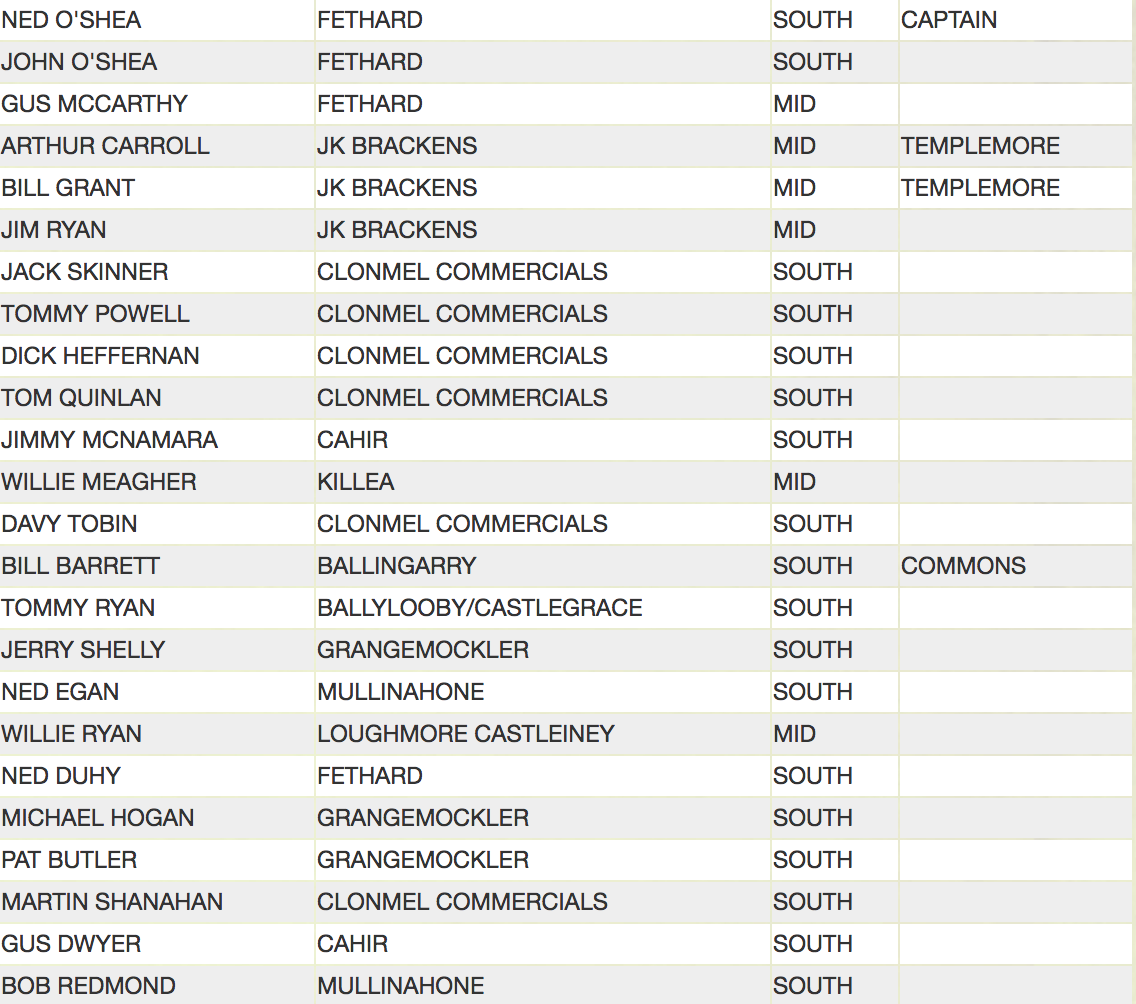 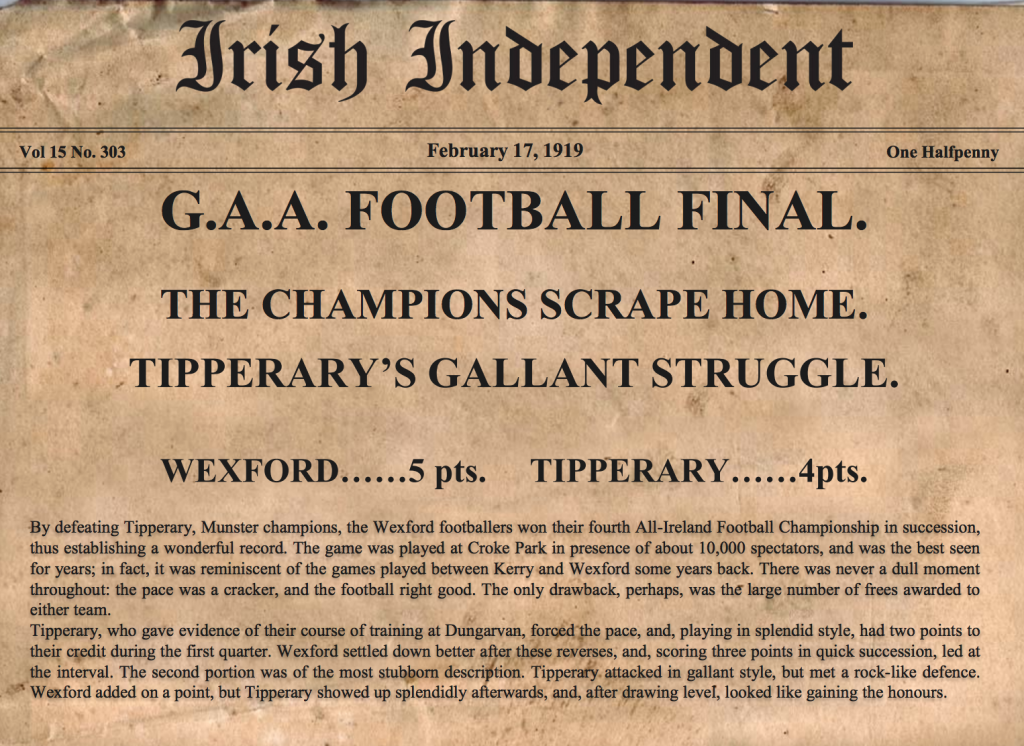 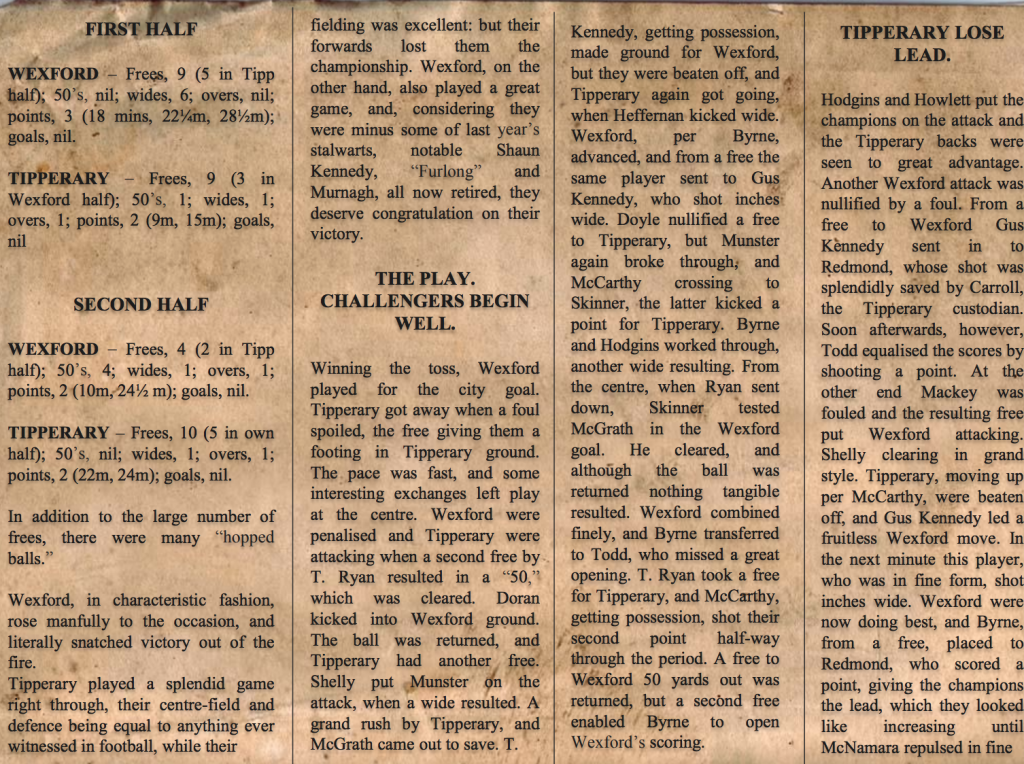 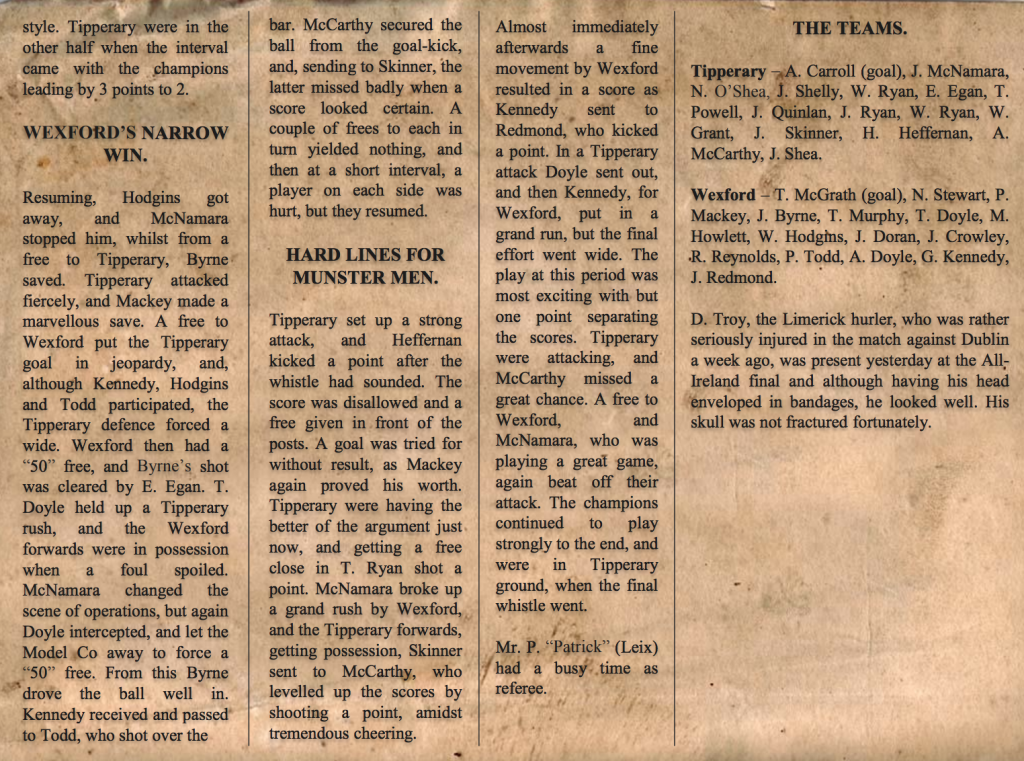 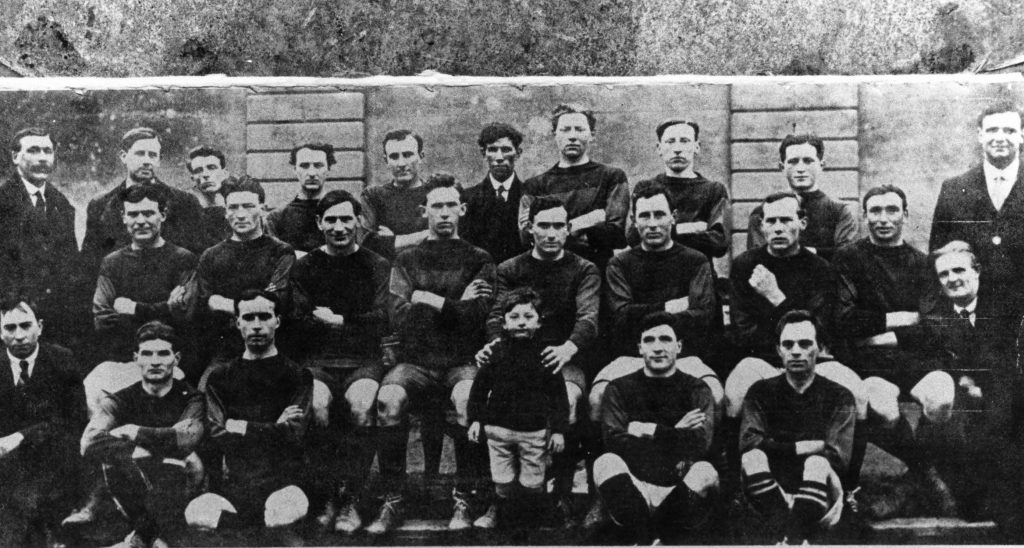