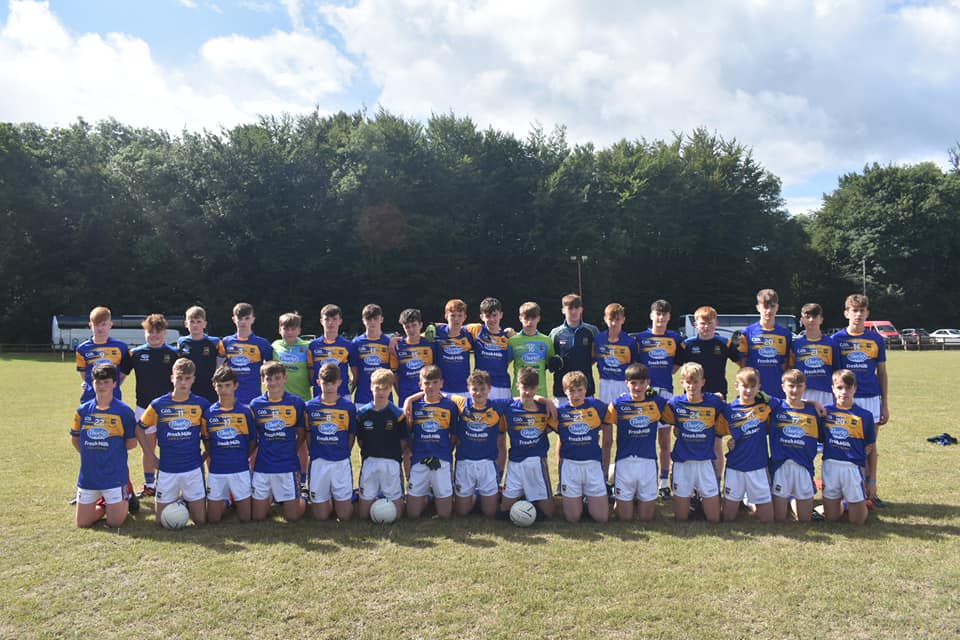 Anthony Shelley looks back at the 2018 Jim Power Tournament

Having successfully overcome Limerick and Mid-West Cork earlier in the month, the Tipperary under-14 footballers travelled to Dungarvan on Saturday to play in the cup finals of the Jim Power Tournament.
After watching the qualifying rounds of this tournament, you did not need to be a close relative of Mystic Meg to know that the winners of South Kerry and Tipperary would be strongly fancied to win the tournament.
American author Ralph Waldo Emerson believed that American writers should not be in awe of European literature. Taking their cue from Emerson, on Saturday morning a group of Tipperary footballers decided that they should not be in awe of Kerry footballers but alas, yet again as far as Tipperary Gaa 2018 is concerned, lady luck proved she is anything but a lady!
Kerry as you would expect are all wonderful footballers but this particular group of South Kerry boys were also very strong in the tackle and prepared to hunt in packs to force a turnover which must surely have pleased Mike Frank Russell and his management team.
Tipperary too are wonderful footballers and although it’s an awful cliché, their willingness to die for the jersey was never going to be in question because, from the moment this panel of 33 players came together, their eagerness to learn and work was a joy to behold. When you have that, then you know you have a team! 21 clubs may have made up the panel but from day one, these young men played and trained as if they had known each other all their lives.
From the throw in, this game was so nip and tuck that a plastic surgeon would have being proud of his work. Football at this level is how the game should be played. The hits were hard but fair and both teams moved the ball swiftly through the lines by hand and foot.
Shane Ryan, dealt comfortably with anything Kerry threw at him and was directing traffic with intelligent kick outs. His cause was helped by willingness of his full back line of Ben Currivan, Odhráin Donaghy and James Cody to show for the ball.  When Shane had to go long, Michael Ryan, Conor Wall, and Jamie Carroll were not found wanting in the air.
With twelve minutes of the twenty minute half gone, Kerry led by three points to two but by now the hard working Philly Hayes and Darragh McVickers were beginning to dictate matters in midfield. Indeed, these two combined to chase down and turnover a Kerry attack and 4 passes later Darragh Minogue was rattling the back of the Kerry net. A Paul Mullen point saw Tipp extend the lead to three points. Kerry responded with three points of their own before a defensive mix up let them in for a goal just before the tea break.
The breeze, which was breathing gently in Tipperary’s favour at the start of the game, freshened up as the half went on meaning Kerry would play with a stronger breeze in the second half.  It was the start of the bad luck that would befall Tipp over the next 20 mins.
The second half was a battle of unremitting fascination. The half forward line of Eoin Craddock, Sean Ryan and Oisin Maher were asked to drop a bit deeper against the wind and time and time again did unpaid and unpensionable work for their team.
The old saying that the full forward line is the first line of defence was certainly true in this game and the trio of Ciaran Woodlock, Paul Mullen and Darragh Minogue can be very pleased with their days work.
But this performance wasn’t all about hard work.  Some of the most skilful players on the field were wearing Tipperary jerseys and it was the Tipp men who were trying to play the more attractive type of football.
With the aid of the wind Kerry were enjoying more possession but time and time again their attacks were thwarted by some wonderful Tipp defending with substitutes Adam Brannigan and Stephen Walsh putting up the Thou Shall Not Pass sign.
As the half progressed, Tipperary once again got to grips with the game and moves involving Paul Mullen, Orrin Jones and Ciaran Woodlock saw two goal chances created but the Kerry goalkeeper brought off two saves of the highest quality.
With minutes to go a Sean Ryan run ended when he was upended in the penalty area. Only the referee knows why this wasn’t a penalty and when the ball broke for Paul Mullen to finish to the net, the Kerry full back dived and stopped the ball with a foot block. Again the referee waved play on. Two penalties denied in the space of two seconds summed up the luck on the day and South Kerry ran out winners on a score line of 1-7 to 1-4.
Sometimes the scoreboard doesn’t tell the full story.
Team:Shane Ryan (Clonmel Commercials), James Cody (Mullinahone), Odhráin Donaghy (Durlas Og), Ben Currivan (Golden), Michael Ryan (Ballingarry), Conor Wall (Durlas Og), Jamie Carroll (Emly), Philip Hayes Capt. (Durlas Og), Darragh McVickers (Clonmel Og), Oisin Maher (Cahir), Sean Ryan (Upperchurch), Eoin Craddock (Holycross/Ballycahill), Darragh Minogue (Durlas Og), Paul Mullen (Drom/Inch), Ciaran Woodlock (Durlas Og): Subs Used:  Adam Brannigan (Clonmel Commercials), Orrin Jones (Knockavilla Kickhams), Stephen Walsh (Moycarkey/Borris) Vanston Worrell (Moneygall/Clonakenny)

Next up was the host county of Waterford, a team who had topped their group earlier in the month.

Ernest Hemingway said that “to make war you need intelligence but to win you need talent” and despite making fourteen changes for this game, Tipperary would prove they had both the football intelligence and talent to go to war.
The pace of this game was every bit as fast as the previous game even if the play was a bit more open.

Win it or kill it was the Tipperary mantra for the throw it. Tipperary won it and the tone was set. A couple of Brian Quinn points, including one from an angle that would have William Tell nodding approval, helped settle early nerves and for the next twenty minutes Tipperary put on an exhibition of football seldom seen in Bushy Park, Dungarvan or any park for that matter.

Tristian McCormack-Ryan and Ben Ryan took control of midfield and this gave the Tipperary forwards a platform to perform.
JP Anglim started to direct the orchestra and delivered quality ball to his band members including Donnacha O’Meara (who would finish the game with 1-4), Conor Parker, the aforementioned Brian Quinn, and the outrageously skilful pair of Jack O’Neill and Vanston Worrell, began hitting the high notes.
By the time the referee blew the whistle for the jaffa cakes, Tipp led 1-8 to 0-3, a score line that flattered Waterford.
The second half saw Waterford enjoy more possession but this time it was the turn of the Tipperary back line to turn on the style. Tom Bourke’s kick-outs, even against the wind, were going farther than you would on your holidays, while Odhráin Donaghy and Sean Leahy were patrolling their centre positions with all the alertness of a parish priest at a 1950’s ceile. They were well supported by their four curates Alex Moloney, Conor Farrell, Stephen Dee and Tadgh Gould.

With the aid of the wind Waterford narrowed the score to four points. Just when it seemed, despite having been outplayed, that Waterford were going to make a game of it, one of their midfielders took a touch too many and was hit by a bolt from the blue and gold in the form of Ben Ryan.  A swift counter attack followed and JP Anglim finished to the net.

1998 Reunion and Launch of Strategic Plan 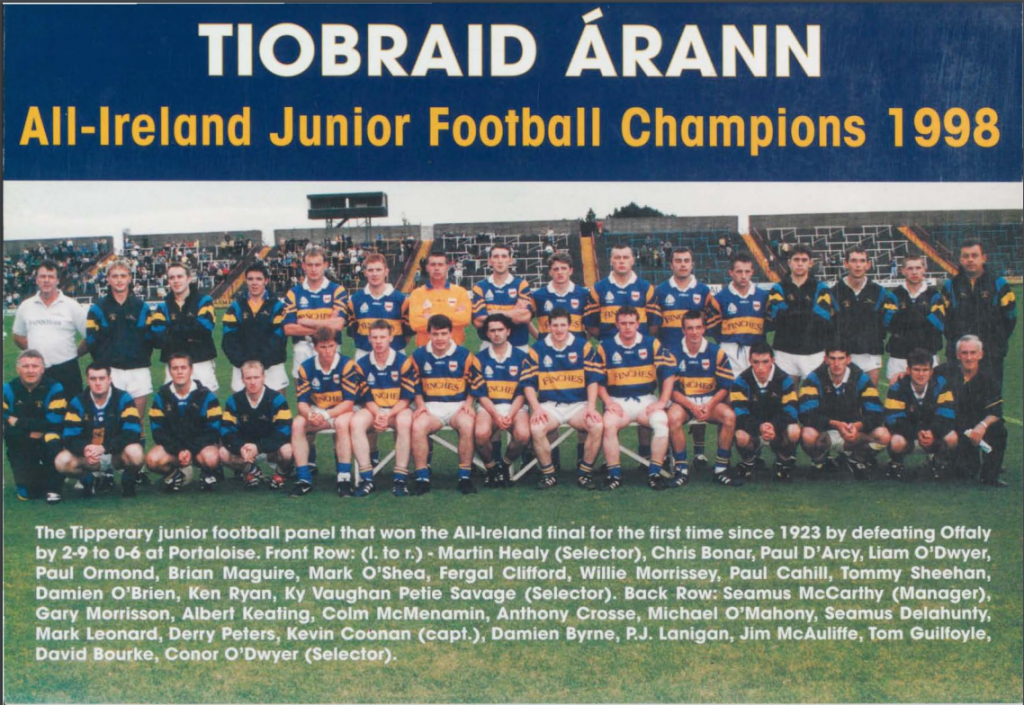 In 1998 Seamus McCarthy’s junior football team captured the All-Ireland junior football title after defeating Offaly in the decider in Portlaoise having earlier disposed of Cork in the Munster final. The Tipperary Football Committee and the Friends of Tipperary Football will honour this team on the twentieth anniversary of their amazing success on Saturday 25th of August in Nenagh.

Nenagh was chosen as the ideal place due to the fact that captain Kevin Coonan hails from the Nenagh Éire Óg club.

You can read more about this team’s exploits here.

Also on the night, the Tipperary Football Committee will officially launch their three year strategic plan for the future of the game in the Premier county. Driven by Conor O’ Dwyer, this work provides a comprehensive and detailed plan on where we would like to see football go in the near future. Anyone with an interest in Gaelic football is more than welcome to attend on the night.

August 4th 1918 was one of the most remarkable and significant days in the history of the GAA. It will be forever remembered as #GaelicSunday! Get involved in commemorating this historic day! Learn more at: https://t.co/ZQjaAIgZnG pic.twitter.com/Mo0bxVgI1v

This weekend the GAA mark the 100th anniversary of Gaelic Sunday, a day in which the GAA defied the British authorities in Ireland. Earlier in 1918 the government demanded that all gatherings, including GAA matches, required a permit before going ahead. Disgruntled, the GAA organised a series of matches throughout the country in open defiance of the ban, knowing that the RIC would not have the resources to police all games.

Of course Tipperary were to the fore and numerous Gaelic football and hurling matches were played throughout the county.

Here is the full list of matches in Tipperary: