Arise Knocknagoshel, and take your place among the nations of the earth!” was the famous war cry on a banner carried by local men to a rally addressed by Charles Stewart Parnell in Newcastle West in 1891. 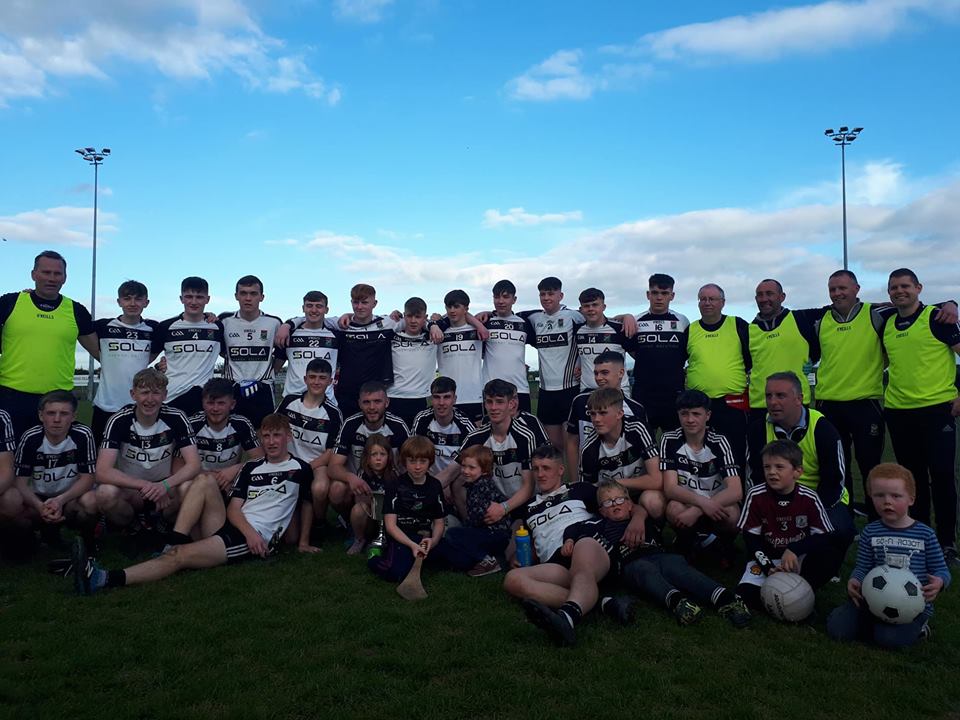 “Arise JK Brackens and take your place among the football strongholds of Tipperary” should be the war cry of Templemore natives from now on because last Saturday, JK Brackens became just the sixth club in Tipperary to complete the Minor A and under-21 A Gaelic football double in the same year. For the record, the other clubs are Clonmel Commercials (2010 & 2014), Moyle Rovers (2008), Emly/Lattin (1982), Arravale Rovers (1972) and Loughmore Castleiney (1964, 1976 & 1979).
To find the last time a Templemore side had won the county minor A football title, you would have to multiply Rip Van Winkle’s little nap by two and a quarter. I recall my especial hero and old coach, Benny Keating telling me that in the 1973 final, Don Ryan gave as fine an exhibition of football as he had ever witnessed from a minor footballer. Benny wasn’t at the game on Saturday but if he was he would have to update his opinion as Man of The Match, Eanna McBride put his name on the ballot paper to be considered for that accolade.
Gaelic football at inter-county level is rightly getting bad press of late but at club level and particularly at minor and underage level, the beautiful game is still played as Michael Cusack intended. Heart and skill are a formidable combination and over the course of an hour last Saturday, two exceptionally talented teams brought both of those qualities to the field.
Cahir were out of the blocks faster than a juiced up sprinter and had the ball in the net after 55 seconds when Sean Murphy got on the end of a high ball into the square. Such was the simplicity of the goal that it threatened more. They say you can’t win a game in the first few minutes but you can certainly lose one. If JKB were to survive in this final, they needed to weather the early Cahir storm. They were not found wanting. Lorcan Roche set the tone for the day and hit everything that moved, and a few things that didn’t. Despite having more possession than a lion could handle, Cahir would only add two more points to their tally in the first ten minutes, a wonder point from their wing forward Nicholas Reid and a free from the excellent Sean Murphy. Brackens were living off scraps but added two points of their own through Andrew Ormond and Eanna McBride.
David Clifford (the Cahir version) added a free to leave the score at 1-3 to 0-2 with twelve minutes gone. Then came the turning point, or turning goal if you like. A brilliant Cahir move sliced open the Brackens defence but Murphy’s shot ricocheted off the crossbar and Brackens cleared. James Corcoran collected the clearance and galloped like inflation through the Cahir back line. He exchanged a couple of one twos with McBride before selling the most beautiful of dummies and burying the ball beyond the reach of Killian Halpin in the Cahir goal. It was a goal of the highest quality scored by a player of the highest quality who had just turned sixteen years of age a few days earlier. In the space of twenty seconds Brackens had gone from looking like they would go seven points down to being just one point down and they weren’t finished yet.
A minute later a mix up in the Cahir defence saw McBride pounce like a cat on the loose ball but he was pulled down just as he was about to apply the finish. Shane Doyle made no mistake from the resultant penalty and with seventeen minutes gone JKB lead 2-2 to 1-3. To their credit, over the next ten minutes,  Cahir would outscore JKB four points to two to ensure the sides where level before the SOS came for the tea and Jaffa Cakes. The highlight was a marvellous point from distance by Tommy McDonagh.
It had been a wonderful Act One performed by two fine teams and yet as the teams took their break in the dressing rooms, the experts and non-experts in the stands had a curious feeling that that the drama was only beginning.
JKB had been slow to emerge from their burrow underneath the stand and we wondered if they had helped themselves second helpings of the Jaffa Cakes as Cahir started the second half with points from Sean Murphy (f), Jake Fitzgerald and Kevin Grogan that saw them move three points clear within five minutes of the restart.
But, as we’ve seen so often in the past, you’d need the months mind said before you could declare this JKB team dead. Keeper Shane Sweeney had kept the goal mouth nice and tidy all day and was Cluxton like with his kick-outs ensuring Brackens gained primary possession at vital times in the game. Jack Prout patrolled his area with the alertness of a parish priest at a 1950’s ceilí and was well backed up by his curates Martin Bergin and Patrick Moloney. Michael Egan, Tadhg Nolan, Ciran Byrne and Stephen Cahill who was the lone musketeer in the full forward line for a lot of the day, rolled up their sleeves, put their shoulders to the wheel and did unpaid and unpensionable jobs for their team. 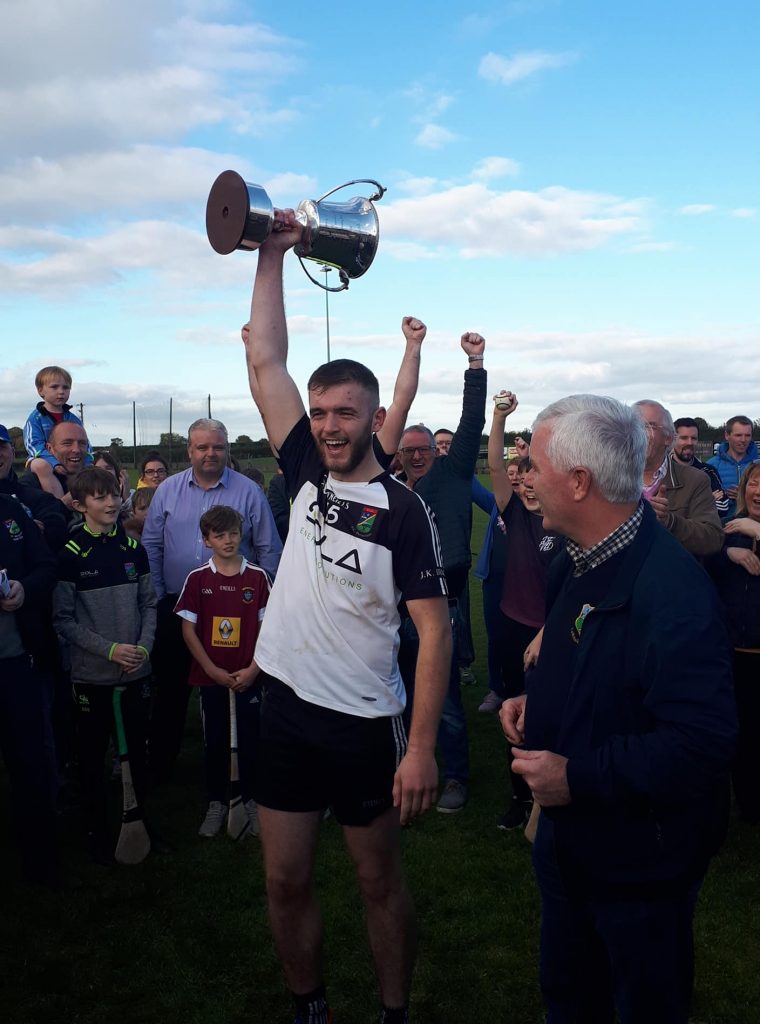 Rudyard Kipling told us that “if you can keep your head when all around you are losing theirs……….. you’ll be a man, my son”. When the need was greatest, young Conor Cadell kept his head and played like a man.
Nick Keane and the excellent Nicholas Reid swapped points. A Shane Doyle free on fifty minute mark was quickly cancelled out by a point from out in the country from France Delaney to restore Cahir’s three point advantage.
Then on 53 minutes came the moment that will be talked about in Templemore for years to come. An Andrew Ormond pass found Nick Keane in a parcel of space. Spotting the keeper off his line, Nick floated the ball over his head and into the top corner of the net. It was a wonderful moment from one of the hardest working players in the club. Some wondered if Nick was shooting for a point, but he assured me afterwards that he meant it and I have no reason to doubt him.
Within a minute, Cahir were back in lead through a David Clifford (Cahir version) free but when the chips are down McBride yet again provided the salt and vinegar, rising like interest rates to pluck a ball from the air and dispatch it over the bar. When Andrew Ormond gave JKB the lead on 57 mins, we knew that the last few minutes were going to be more than our hearts could bear.

There is no doubt that Cahir will regret not putting a 30 yard free over the bar to level the game as we headed into injury time. Instead they tried to work a goal but were headed off at the pass by the JKB posse who broke up field at pace and Andrew Ormond slotted over his third of the day to make the score 3.09 to 1.13. Cahir had one last chance to launch a free into the JKB square. They opted to go short, the pass was intercepted and Paddy Russell called a halt to proceedings.

All heaven broke loose as Brackens supporters rushed to greet their heroes.

The management team of Jim Mullen, Mel McBride and Aidan Doyle, might never enjoy a better day patrolling the sidelines than they had last Saturday. Tactically they got everything spot on and for them this victory had been 3 years in the making.

After the match I sat having a pint with a few of my club mates, a wise man wandered over and said “you know what lads, I think football might be our game”.

It was hard to disagree! 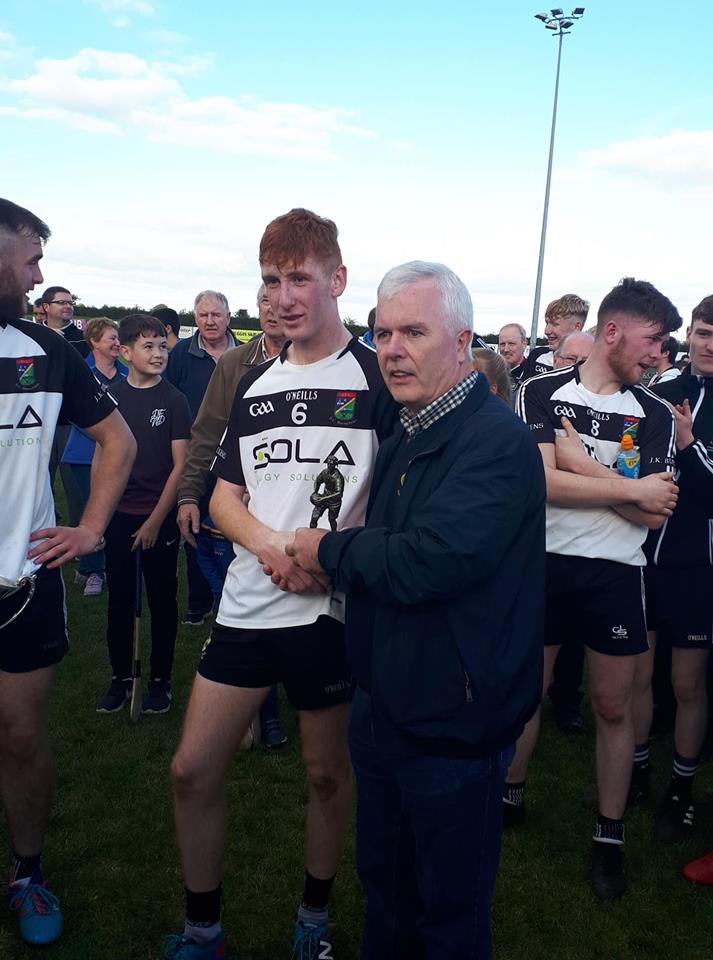