Anthony Shelley Looks Back at the Tipperary Armagh Match

Anthony Shelley, in his own humorous way, reports on the Tipperary Armagh clash last Saturday 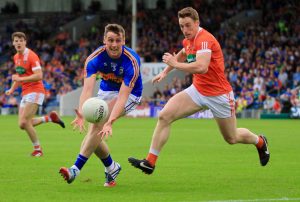 As I walked through Liberty Square on Saturday afternoon, thoughts of the popular American drama series, Orange is the New Black came into my head. Streams of Armagh supporters were flooding the square like Knock pilgrims who had just received word of a second apparition in church yard.

Surrounded by orange jerseys, I couldn’t help wondering if I was witnessing the greatest case of Stockholm Syndrome ever recorded.

The history of the Armagh colours is a curious one. The county colours were originally black and amber stripes and some say that, in a neighbourly gesture, the orange jerseys were presented by members of an Orange Lodge back in the 1920’s. When details of the gesture were leaked, the Lodge was ordered to disband.

Others claim that in 1926, a group of nuns from Louth knit a set of orange jerseys and presented them to the Armagh Co Board. It would have been considered rude to turn down such a gift from the nuns and Armagh have worn orange ever since.

I headed to Hayes Hotel and in keeping with the theme of Orange is the New Black, I met a man called Debbie. I should have known then this was going to be a strange day.

As we send a couple of Diageo’s finest down the red lane, we both agree that the Tipperary footballers are tragic heroes. They are splendidly gifted but live in a county were these gifts are unlikely to be abundantly rewarded. You know what you are signing up to when you become a Tipperary footballer. You do it for love not glory, although I still maintain that, circa 1888, if J.K. Bracken hadn’t rode his horse across a goalmouth in Templemore to deprive Thurles Sarsfields of a certain goal and a football title, then Tipperary would now be a football county. Prior to that Thurles was a football town. After that incident, the Thurles boys decided they have no luck at football and turned their attention to hurling. With Clonmel already a committed football town, if the next major town in the county had remained a football town, then there was a fair chance the rest of the county would have followed suit.

Back in Hayes Hotel, an Armagh supporter claims the fine weather will suit Armagh better than Tipp. He got a tad annoyed when I pointed out that Tipperary didn’t exactly have an Alaskan like climate so we compromised and agreed that the weather should contribute to a fine game of football. 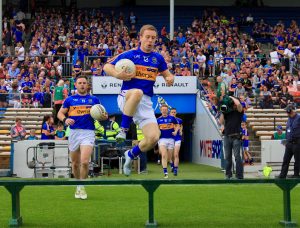 The ball is in and the game is on!

Armagh attack from the start and should have had the ball in the net after 30 seconds but Andrew Murnin palms it wide. We hit two early wides ourselves before Kevin O’Halloran, Casey and President Jack Kennedy have us three points to two up after twelve minutes. Sweeney and Grimley swap frees and then the referee makes his first big call of the day. Gavin McParland slots the ball to the Tipp net, but Paddy calls play back for a phantom foul and awards Armagh a thirteen-metre free instead of a goal.

Kieran McGeeney has received much criticism since he became a manager but on Saturday he got his tactics spot on. He tied up Sweeney and Quinlivan and negated the Rolls Royce engines of Maher, Kiely and Feehan by constantly bottling them up in cul-de-sacs in their own half. Despite this, we head for the Jaffa Cakes with a ten point to eight lead. 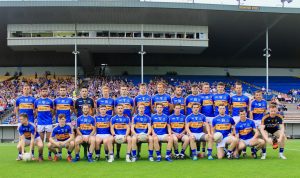 The managers in the stand are looking for the introduction of Philip Austin for George Hannigan. I think it’s too predictable. I call for the introduction of Jason Lonergan for O’ Halloran and hold Austin for another ten minutes. I argue that we are going well at midfield, Armagh are conceding the kick-outs which sees the stats at nine from ten on our own kick-out. Lonergan can take over the left legged frees and offer additional pace to our attack. Against the wind he can carry ball and his runs are often as unpredictable as the flight path of the UFO’s in Roswell.

Liam Kearns goes with the managers in the stand and Philip Austin is introduced for George.

Five minutes into the second half, an Austin run sets up #MQ14 for the opening goal of the game and gives us a four-point lead. Armagh reply with two quick points before Paddy Neilan issues papers for the impeachment of President Jack Kennedy. To the 6,823 crowd in Thurles it looked nothing more than an accidental tangle of legs. To Paddy Neilan it was a deliberate body check by the President or maybe he deemed it a deliberate drag to the ground. Only Paddy knows.

When thinking of killing Duncan, Macbeth spoke of the “deep damnation of his taking off”. He knew he would face eternal consequences if Duncan was “taken off”. Details of Liam Kearns knowledge of Shakespeare are sketchy but he may well speak of the “deep damnation of his sending off” as the black card to President Jack Kennedy changed the course of this game and his team would feel the consequences.

Armagh are now the dominant side and Kenrick, who patrolled his goal well all day, came to our rescue on a couple of occasions before Jamie Clarke goaled in the 69th minute to put Armagh four up.

But Tipperary were not finished yet. Not by a long shot. A young wit commented last week that you’d need the months-mind said before you could declare this Tipp team dead. He wasn’t wrong. Three minutes into broken time, Paddy remembers he is also the official time keeper and indicates that we will be playing an additional seven minutes. In the remaining time, Paddy managed to turn the most obvious black card for Ciaran McKeever into a yellow card but he saved his most bizarre decision of the day until last, when he failed to allow advantage to Philip Austin as he broke free of a challenge and was bearing down on goal.

A couple of late Tipperary points and an outrageous and brilliant take of a high ball by Armagh keeper Blaine Hughes ensured the Orchard County ran out 1:17 to 1:15 winners.

Liam Kearns term as Tipp manager is now up. I had serious doubts about his appointment two years ago but now I’m leading the chorus for him to stay. During his two-year reign, we beat Cork in championship football for the first time since 1944, we reached an All-Ireland football semi-final for the first time since 1935 and we will start the 2018 season playing division 2 football. He has achieved all of this with one hand tied behind his back.

Under Liam’s guidance this Tipp Team have often being referred to as the saviours of Gaelic Football. It’s time to save ourselves now and ensure that we don’t let Liam Kearns walk out the door. 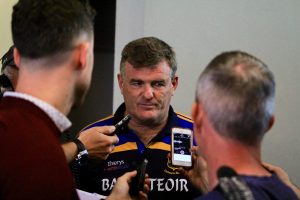