Sunday, November 21st, 1920 saw one of the darkest events in both the history of the GAA and Ireland itself. Here is a brief account on the awful events of that day. 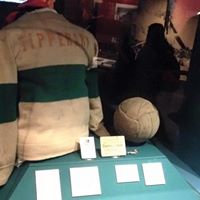 The jersey worn by Michael Hogan on display in the museum in Croke Park. Also in the exhibition is the whistle used by Mick Sammon, the football used on the day, a match ticket and the memory card of Jane Boyle who was also murdered that day.

On the morning of Sunday, November 21st 1920, with the permission of the Dáil Cabinet and under the leadership of Michael Collins, fourteen British secret service men, known as the Cairo Gang, were shot and killed by the Twelve Apostles in their homes and lodgings, some in front of their wives and girlfriends, in Dublin City. The Twelve Apostles were Michael Collins secret assassins. They were founded on 19th September 1919 at 46 Parnell Square, with the aim of executing British spies in Ireland. The murdered British military spies were sent to the capital, under the guise as commercial travellers, to counter the activities of the Volunteers who were rapidly becoming the army of the Irish Republic. Collins had in one fell swoop, wiped out the British spy network in Ireland.

Of the fourteen men killed that morning, six were intelligence agents, two were court martial officers, two were Auxiliaries and one was an RIC agent, another was a landlord, Hugh Montgomery was a staff officer while both Leonard Wilde and Patrick McCormack were civilians. The wife of Captain William Newbury, who witnessed his death, gave birth to a sleeping baby one week later.

Sometime before that date the Tipperary GAA board had issued a challenge to Dublin for a Gaelic football match. The match was fixed for 21st November in Croke Park at 2:45pm and was advertised as follows: 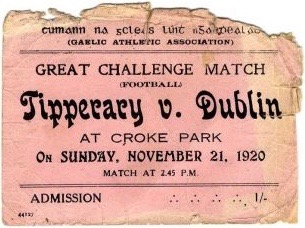 An All-Ireland Test at Croke Park

Upon hearing news of Collins’ early morning attacks, representatives of the Tipperary and Dublin football teams held a conference. Among those in attendance were Luke O’ Toole, Dan McCarthy, chairperson of the Leinster Council, Jim Nowlan, Andy Harty of Dublin County Board and Jack Shouldice, Leinster Council Secretary. They knew there would be reprisals and that Croke Park was a likely target. It was unanimously decided however, that the match should go ahead. Their belief was that if the game was postponed, the GAA would be seen as intricately linked to the IRA and leave itself open to all sorts of allegations and reprisals. Some of the players were not informed of the murders and had they known, they may have decided themselves not to play. Others, like Tommy Ryan, were fully aware of what had occurred that morning and knew the danger they were in. Dan Breen informed Ryan that he was returning to Tipperary and advised Ryan to do likewise. Ryan did not want to let his team mates down and so decided to travel onto Croke Park.

Around the same time as this meeting was taking place the British military decided to have their revenge. Commander-in-Chief of the British military in Ireland, Nevil Macready, knew Collins’ attacks demanded a response and so decided upon the match in Croke Park as the ideal opportunity to send a message to the assassins. 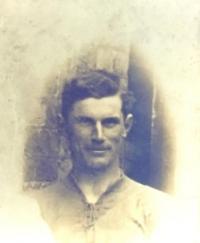 An unfounded rumour goes that one of the British Auxiliaries involved in the operation claimed that they tossed a coin over whether they would go on a killing spree in Croke Park or loot O’Connell Street instead and the coin decided the fate of Croke Park.  Fifteen minutes before throw-in three IRA men, Harry Colley, Seán Russell and Tom Kilcoyne sought out Luke O’ Toole and Jack Shouldice to inform them that a force of Auxillaries and military were being mobilised for Croke Park and that the game should be postponed immediately. Fearing a stampede and panic among the spectators it was decided that they could close the turnstiles to limit the crowd inside the stadium however there were not enough stewards around to inform the turnstile operatives. The IRA’s Second Battalion who usually stewarded these games had already been withdrawn for fear of reprisals.

Despite the unease in the city on the morning of November 21st, somewhere between 5,000 and 10,000 spectators travelled to Croke Park for the match. The ball was due to be thrown in at 2:45pm by referee Mick Salmon from Kildare but due to the swell of the crowds it was decided to delay the game until 3.15pm. After about ten minutes of play there was no score despite numerous Tipperary attacks. 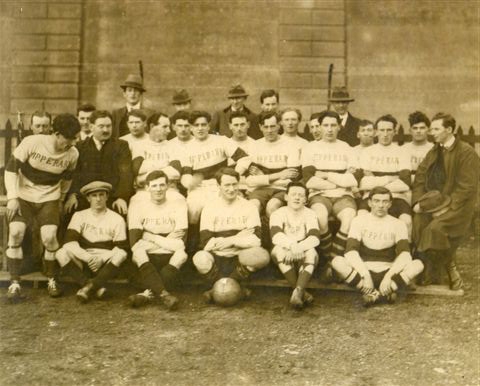 Suddenly a plane flew over the grounds and omitted a red signal-flare. This flare was a signal to the armed forces outside the stadium that the match had gone ahead and that the invasion could commence. Immediately, armed forces of the Crown surrounded the ground and without warning opened fire, first with small arms, then from machine guns hastily set up on the ground just inside the main entrance. The RIC from the Depot with fixed bayonets charged up the outside road, lorry loads of Black ‘n’ Tans, Auxiliaries and British Military all joined in, firing volley after volley on the inoffensive crowd. The crowd thought at first they were firing blanks but then machine gunfire was fired in increasing volume. The crowd stampeded towards the Railway wall, furthest from the gunfire. 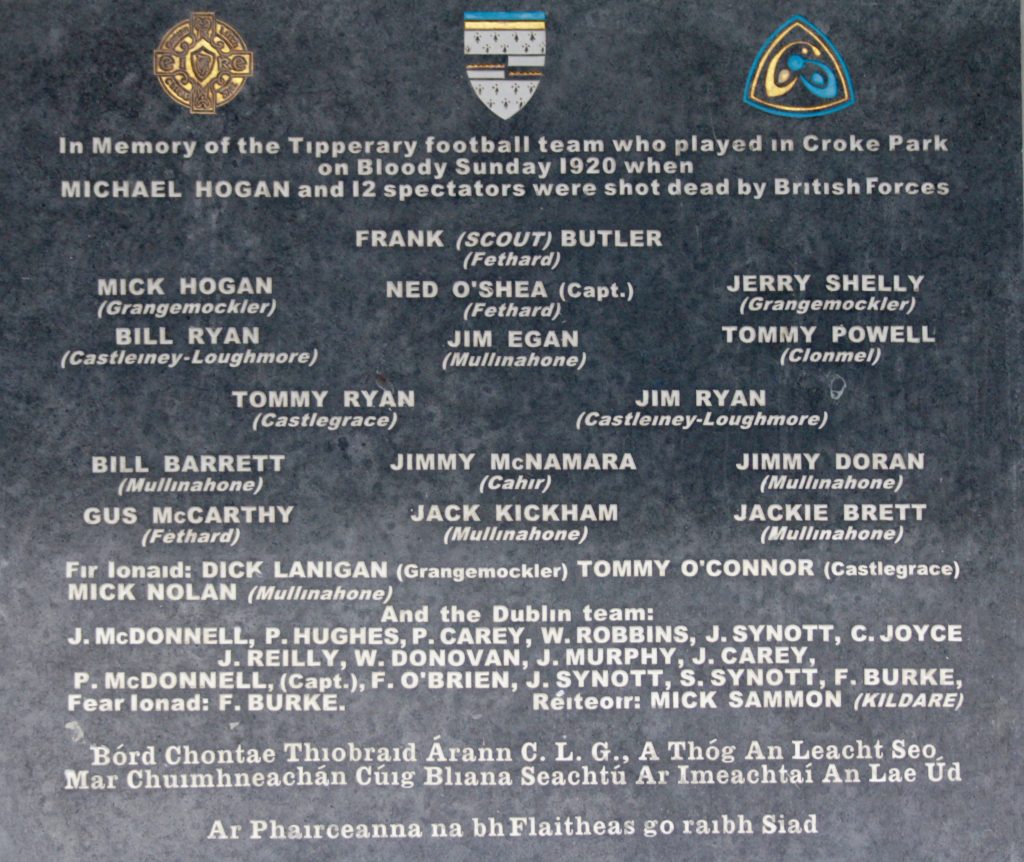 Many of the startled crowd threw themselves onto the ground. Thousands raced to the exits and every other possible escape route to try and avoid the mass of bullets been sprayed up and down the field. Hundreds were trampled on by hordes of stampeding human beings. There was an inevitable rushing and pushing but also a fine measure of magnanimous action. The less active folk amongst the spectators were rendered willing assistance in their efforts to get away. After about ten minutes an RIC officer advanced across the pitch, announcing a proposed search of spectators. Hundreds were kept in the grounds for interrogation and then were searched for arms as they left the stadium. About thirty revolvers were found belonging to some of Collins men that had come to see the match after the early morning murders. The RIC had a good idea that they were at the game and had been given orders the kill three players for every soldier killed. Fortunately no soldier was killed.

The result of this atrocious attack on unarmed persons was the killing of fourteen and the wounding of sixty-three, some of whom died later due to their injuries. Most of the victims were from the country and included a number of women and children. One boy was bayoneted, two women shot dead. The casualties included Jeannie Boyle, who had gone to the match with her fiancée and was due to be married five days later, and 14-year-old John Scott, so mutilated that they thought he had been bayoneted to death. Another two victims were Jerome O’ Leary and William Robinson, aged 10 and 11 respectively. William succumbed to his injuries two days later. Tipperary footballer Jim Egan was also shot upon as he tried to escape.

Amongst those killed was Tipperary footballer Michael Hogan after whom the ‘Hogan Stand’ in Croke Park is named. His body was found, still in his football attire, lying in a pool of blood at the Clonliffe end, adjacent to Hill 16. A young Wexford man, Tom Ryan, who tried to whisper an act of contrition into his ear was also shot dead. Heroine of the day was Sligo girl Annie M. Burke, who risked her life by running across the field to place a coat over his remains. Father Patrick Crotty of Mullinahone, Co. Tipperary arrived on the scene and he administered the ‘Last Rites’ while Annie lay kneeling beside the corpse.

The Dublin side, Bloody Sunday

Hogan’s remains, accompanied by his team many of which had stayed with the Dublin players for a few days, arrived in Clonmel the following Wednesday. Thousands joined in the funeral procession to Grangemockler. The men who witnessed the frightful scene of his killing laid his coffin, draped with the Tricolour, to rest.

Tipperary player Bill Ryan recalled in an interview with John J. Hassett how goalkeeper Frank “the Scout” Butler, a veteran of World War One, fell straight to the ground when the shooting started. The British soldiers realised that he had military training and kicked him in the arms and legs. They accused him of being one of the gunmen who murdered their men that morning. Butler showed them tattoo marks of his regiment and told them the last gun he fired was on the Continent of Europe.

A year after this match a re-fixed game was arranged between the same two sides. This match would have mixed emotions for many people. Memories of Bloody Sunday were still fresh in peoples’ minds and almost everything about the day was arranged to mirror that match. Kildare’s Mick Salmon was once again the referee, throw-in was fixed for the same time at 2:45pm and both teams wore crêpe armbands to remember those who had lost their lives. Dan Breen threw in the ball to begin the match and the Freeman’s Journal reported that “the pace and vigour that Tipperary maintained from the very outset was remarkable”. By the time Mick Salmon blew for full-time Tipperary were leading 5-3 to 0-0.

No official inquiry was ever held into the events in Croke Park that day because any findings would have been of huge embarrassment to Britain and furthered Irelands claim for independence. However the following statement was released to the newspapers by the authorities:

A number of men came to Dublin on Saturday under the guise of asking to
attend a football match between Tipperary and Dublin. But their real
intention was to take part in the series of murderous outrages which took
place in Dublin that morning. Learning on Saturday that a number of these
gunmen were present in Croke Park, the crown forces went to raid the field.
It was the original intention that an officer would go to the centre of the
field and speaking from a megaphone, invite the assassins to come forward.
But on their approach, armed pickets gave warning. Shots were fired to warn
the wanted men, who caused a stampede and escaped in the confusion.

The referee was Mick Salmon from Kildare. The Tipperary team wore white jerseys with a green stripe. “TIPPERARY” was embroidered across their chest. 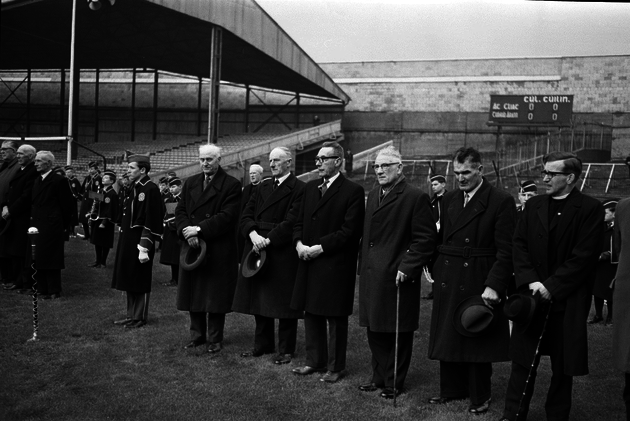 In what was a fitting tribute to the memory of Michael Hogan, the Tipperary footballers, including many of those who witnessed the horrific events in Croke Park, captured the 1920 All Ireland football title (played in 1922) ironically against Dublin on a score line of 1-06 to 1-02. Unfortunately for the Premier county, that was to be the last time Tipperary captured that prestigious crown. 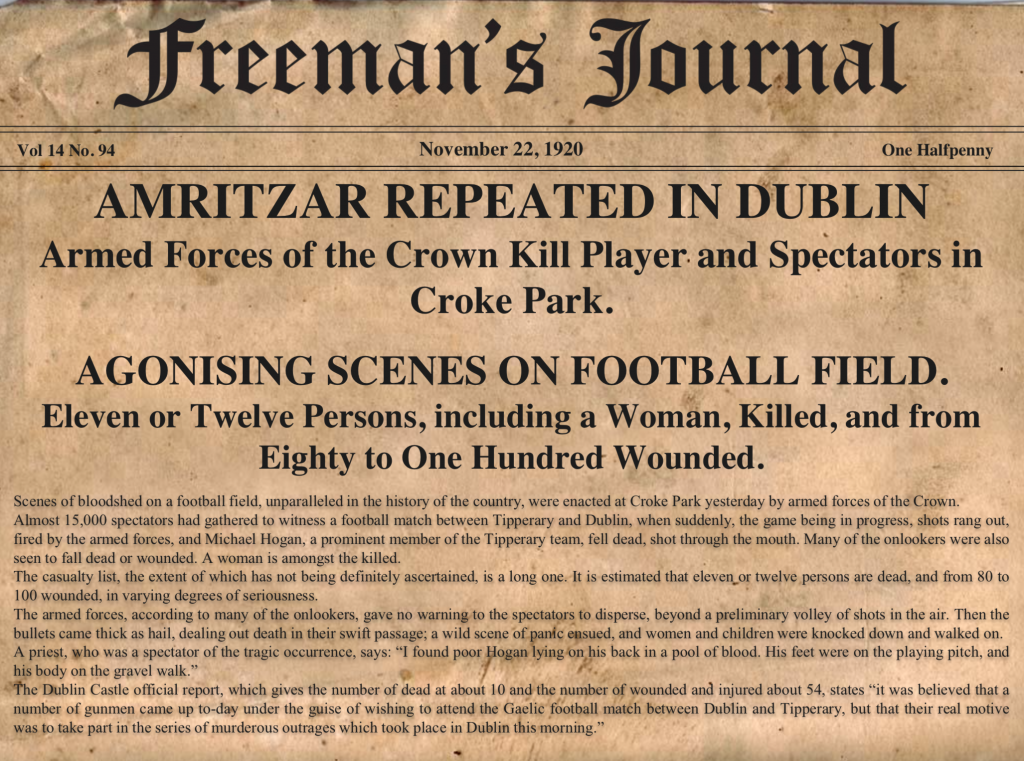 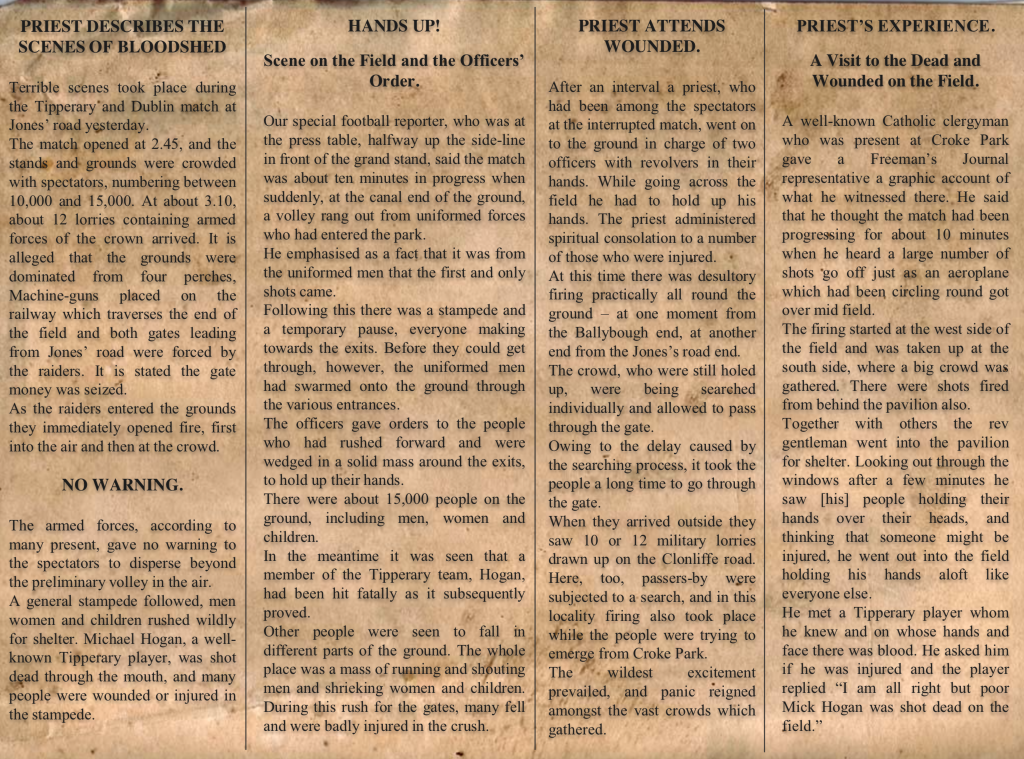 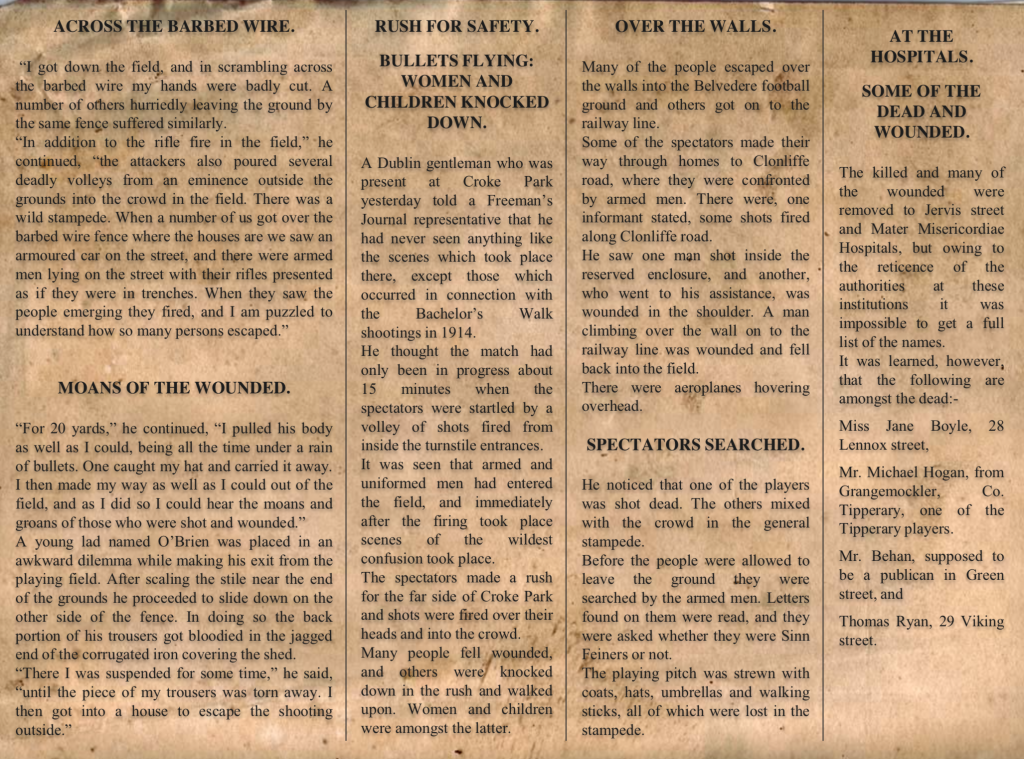 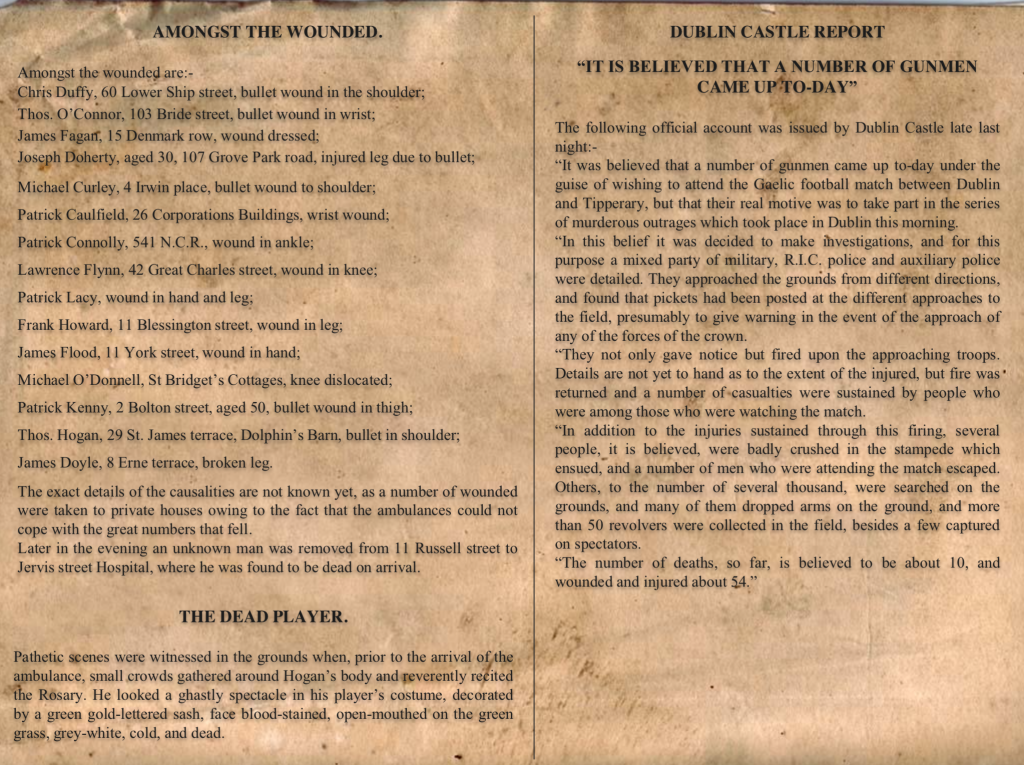 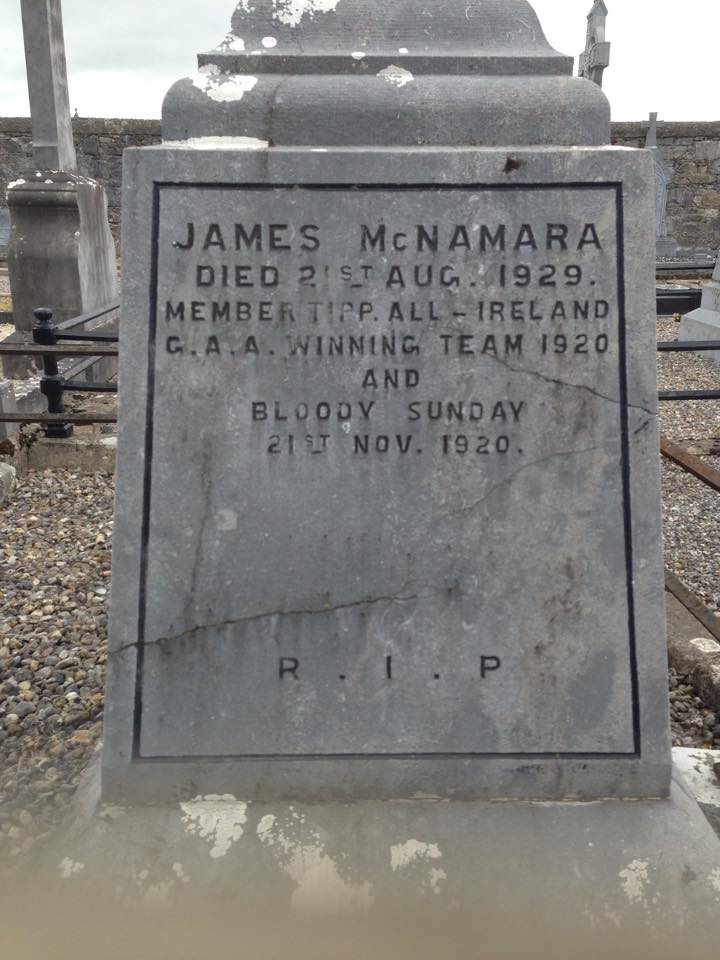