According to computer scientists at Cambridge University, Sunday 11th April 1954 was a day when nothing actually happened. It was such a slow news day that the theft of a cup in London was front-page news in the papers the following morning.

Last Saturday afternoon, the Tipperary Senior Football Semi-Final between Clonmel Commercials and Kilsheelan/Kilcash was so uneventful that it could well have taken place on 11th April 1954.

If Rip Van Winkle had awoken from his little nap during this game he would have rolled over and gone back to sleep and if it wasn’t for referee Seanie Peters deeming that a few tackles were made in cold blood rather than self-defense then there would be very little to report.

After a swashbuckling display in the last round, playing some of the most attractive football I’ve witnessed in Tipperary in a long long time, it was disappointing to see that Kilsheelan didn’t arrive for this semi-final in a creative mood. 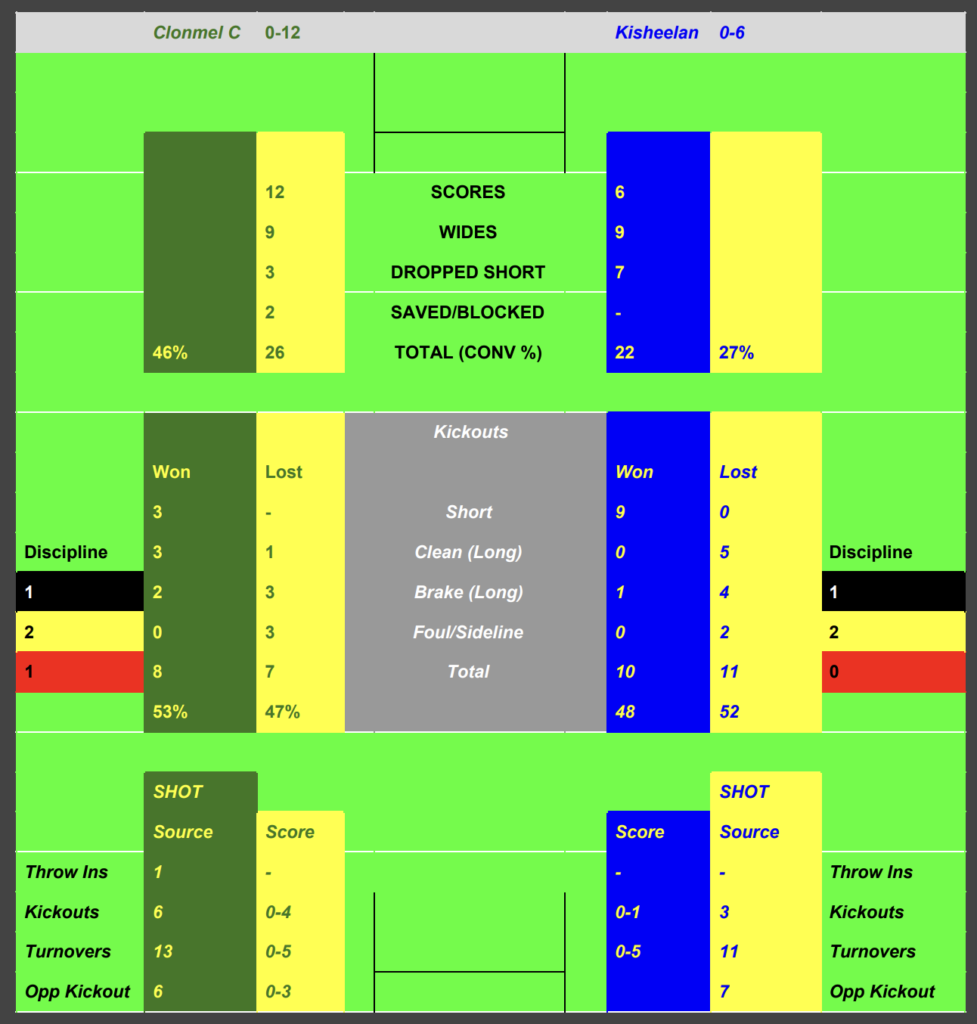 You could be forgiven from thinking that, in the period between their last game and this game, the Kilsheelan management had fallen in love with the Northern style of football and fallen rather blindly in love at that.

To beat Commercials, you have to take chances and perform without a safety net.

Despite Kilsheelan having plenty of possession, most of it was in their own half and with their half-forward line withdrawn, they had no obvious out-ball to launch attacks. Too much of their play was over and back across the field rather than going forward.

Commercials weren’t much better in this regard. This was as bad as I’ve seen them play in the last 10 years. They will of course tell you that semi-finals are just about winning and getting to the final but deep down they will know that a repeat of this kind of performance won’t do against either Loughmore or Moyle Rovers in that final.

Their passing lacked its usual smoothness, their tackling was lazy rather than decisive and when some of their forwards weren’t hiding in plain sight they were running down cul de sacs and blind alleys. At the other end, their kick-out return of only winning 53% of their own kick-out is unlikely to be good enough to get you over the line in a county final.

Evan Comerford twice gave Kilsheelan an early lead with two well-struck frees but a Jason Lonergan free and a lovely point on the turn from Michael Quinlivan saw the sides level after 10 minutes.

On 13 minutes, the lion-hearted Daire Brennan was sent to the naughty step for a foot trip on Jack Kennedy. It looked accidental from my vantage point but Seanie Peters was close to the action and deemed it worthy of a 10-minute break. By the time he returned, Commercials had added 2 further points through a Jason Lonergan free and a fine left-footed effort from Padraic Looram to leave the score at 4 points to 2 after 23 minutes.

Two minutes later, Kilsheelan revealed their true selves. Aidan Keane, Mark Kehoe and Brendan Martin were all involved in a free-flowing move that ended with Paul Maher putting over the score of the half but Sean O’Connor replied with a point that should have been a goal before Seamus Kennedy brought the poor first half to a close with a trademark long-range effort to leave the half time score 0:06 to 0:03.

My hope for the next 30 minutes was that the half time team talks would produce an outbreak of football but of course, it’s the hope that kills you. 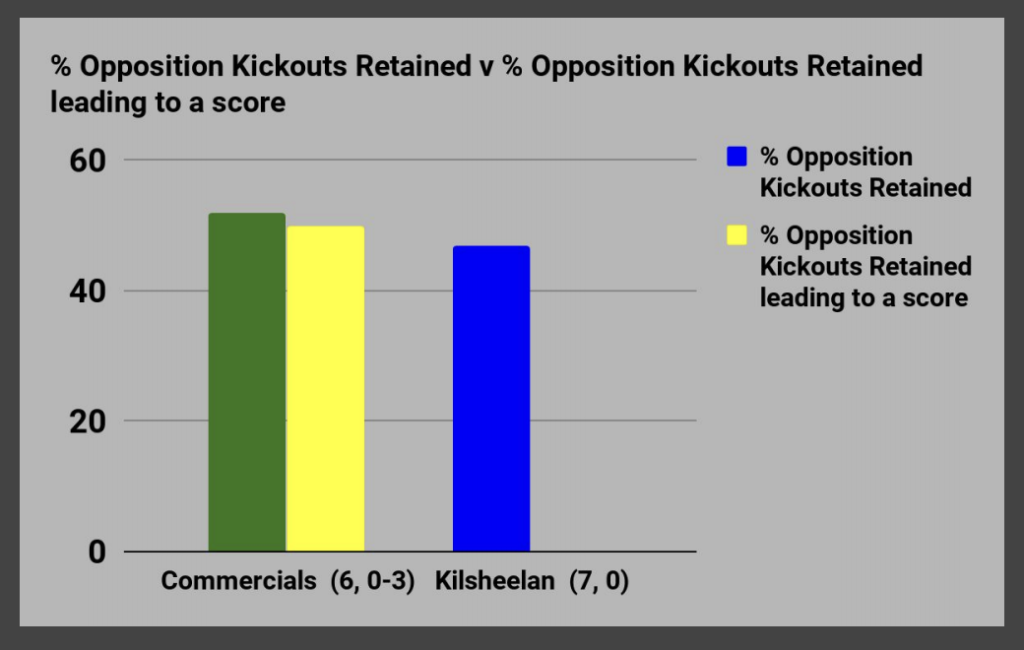 Commercials assumed control from the throw-in and had this game put to bed within 10 minutes of the restart. A Jason Lonergan free and 3 in a row from Colman Kennedy, each one better than the one that preceded it, meant that Commercials could now moonwalk to the finish.

With the game in the bag, it was hard to stay focused on this game and my mind began to wonder if the London Metropolitan Police had ever recovered that stolen cup back in 1954. My thoughts were interrupted by Michael Quinlivan being sentenced to ten minutes of solitary confinement for an awkward tackle on Mark Kehoe.

Colman Kennedy could have added a goal but his close-range effort was brilliantly stopped by Comerford. Then, like the wine at the wedding in Cana, Colman saved the best till last with an outrageous point from out near the sideline on what you would say was the wrong side of the field for a left-footed kicker.

Finally, Seanie Peters blew the whistle and told us all to go home with Commercials winning on a final score of 0.12 to 0.06.  Maybe it was the off the field friendships between the players of Kilsheelan and Commercials that contributed to the lack of real edge in this game but whatever the reason  Charlie McGeever and his management team have much to ponder over the next couple of weeks. 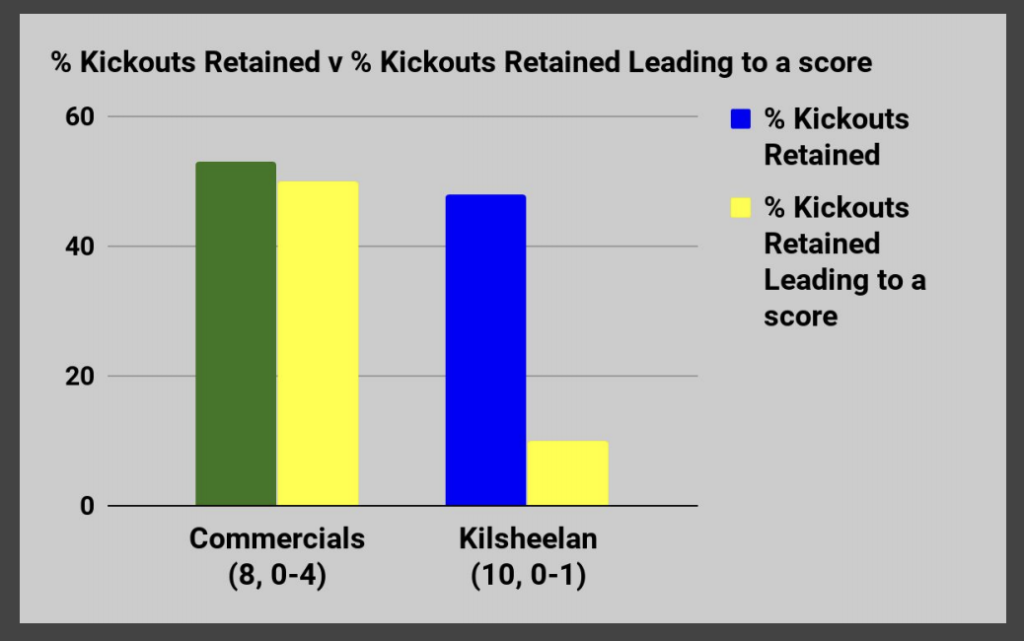