Congratulations to Conor Sweeney on his International Compromise Rules Call Up

We extend our congratulations to Ballyporeen’s Conor Sweeney who has been selected for the upcoming International Rules Series between Ireland and Australia next month.

Irish manager Joe Kernan, assisted by Pádraic Joyce, Dermot Earley and Darragh Ó Sé, revealed his squad today after having trials in the GAA’s Development Centre at the National Sports Campus in Abbottstown over the last number of weeks.

They also revealed that Mayo’s Aidan O’ Shea will captain the squad. In all fourteen counties are represented in the 21-strong panel with Mayo leading the contingent with four players and Kerry next with three. There are no representative from the All-Ireland winning Dublin team.

The two-game series will take place in Adelaide on Sunday, November 12th and the second game is in Perth on Saturday, November 18th with the destination of the Cormac McAnallen Cup decided by scoring difference over the two games.

Conor follows in the footsteps of a number of Tipperary footballers who have represented their country. In 2014 and 2015 Ciarán McDonnald played against Australia while Declan Browne featured in both 2003 and 2004. Derry Foley was part of the squads in 1999 and 1998 while Brian Burke also played in 1990.

We wish Conor and the rest of the squad the very best of luck in Australia. 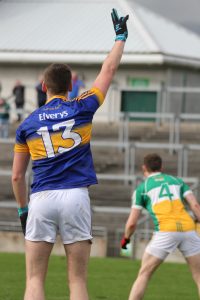 Meanwhile Australia have named a very strong panel ahead of the upcoming series.