Jane Boyle was the only female to die on Bloody Sunday in Croke Park. She was due to be married five days later to Tipperary man Daniel Byron but instead, her life was cut cruelly short. This is her story. 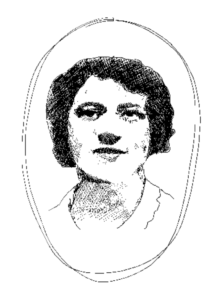 Jane Boyle woke up on 21 November 1920 in blissful happiness. Five days out from her wedding to her beloved Daniel Byron from Tipperary, all seemed perfect in her world. Her wedding trousseau was brimming with linen, crockery, plates, cutlery and various trinkets while her carefully embroidered wedding dress and delicate veil hung patiently awaiting the moment she would walk proudly up the aisle and become Mrs. Jane Byron. That morning she went to mass in St. Kevin’s Church on Harrington St., the very place she was to be married in five days. Instead, four days later her lifeless body lay still in a coffin as the church bore witness to her sad funeral.

Jane, 26, a shop assistant at Spiedel’s Butchers on Talbot St., was the only woman to die on Bloody Sunday. The daughter of Jane and Thomas, a foreman in a coachbuilding firm, she grew up on Lower Baggot St. and by 1920 had moved to a red-bricked, two-storey house on Lennox St. in Portobello where she lived when her sister Mary, her husband and children in the then-thriving working class and Jewish quarter of Dublin’s south inner city. Her neighbours included Russian and Lithuanian Jews who fled the pogroms of 1880 and settled in the capital where they established businesses, spoke Yiddish, opened synagogues and kosher butchers in the locality.

She was employed as a charge girl who collected money from customers and returned their change.

A devotee to the nationalistic cause, one day she spotted republicans Tom Keogh, Paddy O’Daly and Joe Leonard walking past the shop. Realising that police were stopping and searching people further up the street, she quickly raced out, called them back and hid their guns in the butchers until later on when they returned. No doubt her quick-thinking actions saved these three men from arrest. 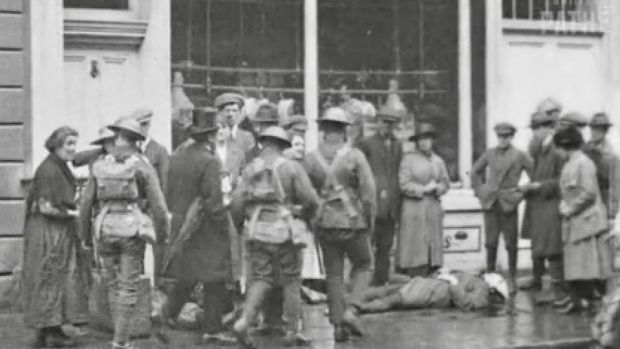 Ireland in 1920 was a dangerous place as the War of Independence raged furiously and she was working the day Tipperary’s Seán Treacy was shot and killed outside the Speidel’s Butchers after a raid on The Republican Outfitters where he was hiding. Indeed, a bullet pierced the front window of the shop and lodged in the ceiling above the staff. Later that same day Keogh, O’Daly and Leonard were walking back along the street and she warned them about the raid which had ended Treacy’s life and advised them to avoid that part of Talbot St. She also offered to hide any guns that they might have but they declined fearing that they might need them later.

Treacy’s death hadn’t been the only violence she encountered. On 22 March earlier that year soldiers were singing Rule Britannia when they were attacked by locals with stones. One soldier was shot in the chest as they retreated past her home on Lennox St. while two civilians were killed in the same incident, one a neighbour (a van driver) and the other a 19-year-old domestic servant. 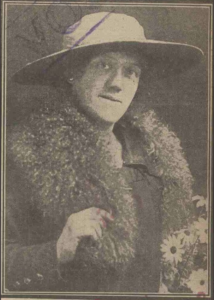 Jane went to Croke Park on Bloody Sunday with her fiancé Daniel, a motor mechanic, to cheer on their beloved Dublin side as they took on Tipperary. They found a spot on the half-way line where the Cusack Stand today proudly looks down on Archbishop Croke’s sod. Linking arms, they enjoyed the opening ten minutes or so as Tipperary dominated proceedings but failed to make any impressio n on the scoreboard when shots rang out and William “Perry” Robinson (11) and Jerome O’Leary (10) became the first two victims of the British authorities attack on innocent civilians enjoying a football match.

Jane gripped Daniel’s arm tightly as they tried to manoeuvrer their way through the now panicked hordes of spectators towards Belvedere wall as around them people were being trampled upon by terrified throngs when Daniel felt her grip suddenly loosen. Jane had been shot in the back and he helplessly watched her disappear under the heaving crowd as he got carried away from her dying body.

Jane was buried on the following Thursday morning in grave BG48½. Despite the authorities order that only family and close friends could attend the funerals of the Bloody Sunday victims and no flags, banners or public displays were permitted, St. Kevin’s Church was packed with a further one thousand mourners outside. To add further insult her fiancé Daniel had to be restrained as her funeral was made wait while a military funeral passed by. Jane’s funeral cortege travelled across the city to Glasnevin cemetery where her coffin was carried to its final resting place by her brothers Peter, James and Thomas and her fiancé Daniel. On a desperately horrific day, five other victims, Patrick O’Dowd, Billy Scott, James Matthews, Daniel Carroll and Tom Ryan were also buried while Jerome O’Leary was laid to rest in the same graveyard the day before.

Jane lay for 95 years in an unmarked grave as her family, fearful of reprisals, did not erect a headstone. Over time she faded into memory until the publication of Michael Foley’s The Bloodied Field which revived the story of that awful day and in 2015 president of the GAA Aogán Ó Fearghail unveiled a headstone in her memory. 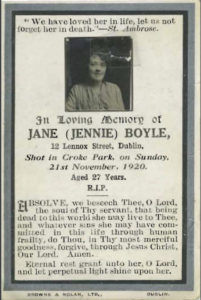