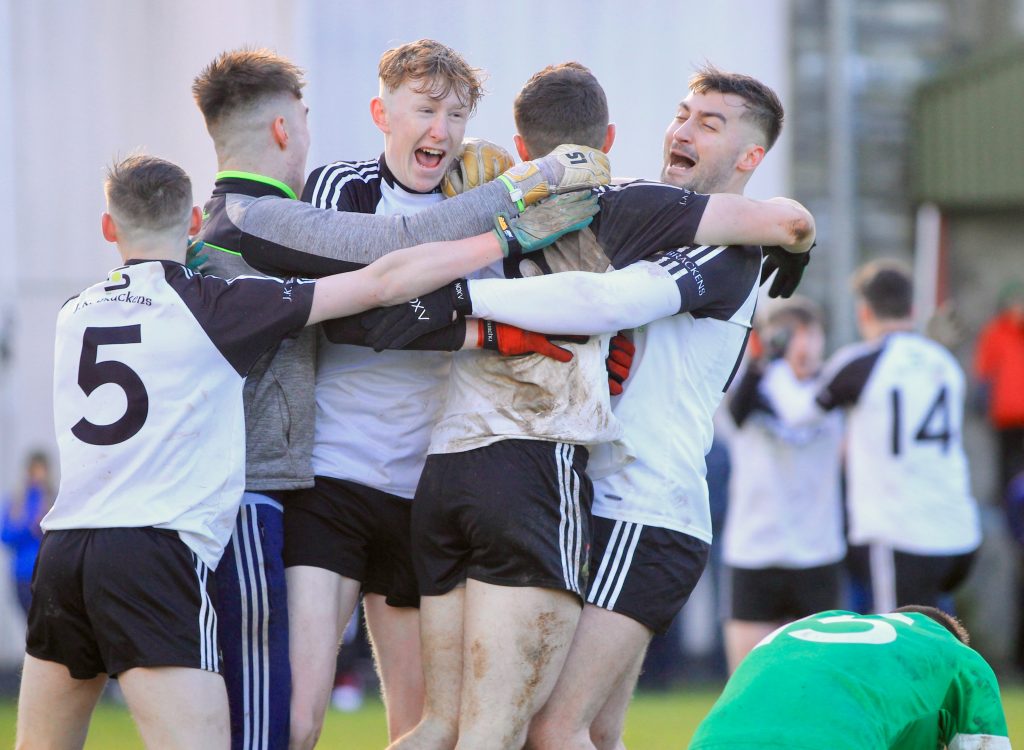 Fr Tim Corcoran’s song was playing in my head on St Patrick’s morning as I faced the drinking man’s ultimate dilemma. Would I have porridge or a fry for breakfast?

During the week I had heard an expert on the radio saying that the best way to start the day is with a good bowl of porridge. I suspect the expert, although well intentioned, did not have a county final in mind when offering this advice.  If she had been in Templemore after the county final on St Patrick’s Day last year she would have known the stomach was going to need more than a “good bowl of porridge” to survive.

It was then I recalled Samuel Johnson’s dictionary and his description of oats as “food for horses in England and for people in Scotland”. I sided with Johnson and headed for the sausages!!

So with the breakfast of champions inside me I collected the first cousin and headed for the game.

I was fortunate enough to be asked to coach the JK Brackens U21’s this year. In the car my cousin offered a sobering thought. “If you lose today, everyone will say you haven’t a clue, if you win everyone will say you couldn’t lose with that team”. The pressure began to mount. I again recalled Samuel Johnson and his description of the Irish. “The Irish are a fair people. They never speak well of one another”.

Anyone thinking that JK Brackens were favourites had obviously never seen Cahir play. This was a fabulous Cahir team that had beaten Moyle Rovers and Clonmel Commercials en route to the final. On social media during the week their supporters were playing down their chances, which is always a sign that a side is confident of victory. Cahir posters were making much of the fact that their team was mostly made up of last year’s minor team and that they were too young to win. Of course social media doesn’t deal in facts but the truth was that Cahir had eight of last year’s minor team playing while JK Brackens had nine.

In his book The Art of War, Chinese philosopher Sun Tzu, advised “If you know both yourself and your enemy, you can win a hundred battles”. Our management team of John Dunne, David “Spooner” Ryan and Michael Lynagh remained true to Sun Tzu teachings and had their research done on Cahir. Spooner and Michael had studied them so much they could nearly tell you how often they went to the toilet while John could tell you what time they went at!!!

Upon entering the ground in Dundrum, I got into conversation with an old Knockavilla Kickham’s friend of mine and as we were talking, the Cahir physio came over looking to know if there was a defibrillator in the ground. Either she was a very conscientious physio or this was taking mind games to a whole new level!!!

Finally, the game that I thought would never start started. JK Bracken’s would play towards the dressing room goals with a lively wind behind them and twelve Cahir defenders in front of them.

In the opening exchanges Brackens were enjoying more possession than a lion could handle but Cahir had the “Thou Shall Not Pass” signs up. Then in the 7th minute we saw Brackens pour out the wine that had intoxicated us in their games against Loughmore, Moycarkey and Arravale Rovers.

Paddy Cadell opened the scoring in the 7th minute with a beauty from distance. Lyndon Fairbrother, who has boot on him that would kick the salt out of holy water, followed up with  another beauty three minutes later.

Then in the 12th minute came what proved to be the turning point or turning goal if you like. Brackens were awarded a free kick around the half way line. The quick thinking Fairbrother saw Neil Quinlan one V one inside and delivered a high ball into the apron of the Cahir goal. Quinlan held off the attentions of Christopher McDonagh with one hand and gathered the ball with the other, turned and shot to the net for his 6th goal of this U21 campaign. Fr Corcoran’s song entered my head again. “three cheers we’ll give for every man that comes from sweet Killea”

The contribution of our two 16 year old wing forwards during this period cannot be underestimated. James Corcoran and Conor Cadell are two fabulous footballers who played with a confidence and a creativity that belied their tender years. They were well minded by their centre man, David O’Shea who was as sharp as a hawk in spring both in the air and on the ground. Andrew Ormond, who carried an injury into the game made intelligent run after intelligent run dragging defenders out of position and creating space for those around him to profit from his unselfish work.

22 minutes had elapsed before Sean Murphy opened the Cahir account with a pointed free.  The impressive Tommy McDonagh added one of the scores of the game five minutes later. In between those scores JKB keeper Kuba Beben had dealt comfortably with a few dangerous balls into the square and showed why he is probably the best under-20 keeper in Tipperary. Kevin Grogan brought the first half to an end with a point from play to leave the score 1-5 to 0-3 at the tea break.

There is an old Irish saying “a good start is half the work”. If JKB were to survive they needed a good start to the second half and nobody did more than Paddy Cadell, captain Tom Murphy, the exceptionally talented and beautifully bred Eanna McBride and man of the match David O’Shea to ensure we got it. They had fine games as both warriors and generals.

The accuracy of free takers on both sides all through this game was of such a high standard that it wouldn’t surprise me to hear that William Tell had spent the last few months coaching in Tipperary. Shane Doyle popped over a JKB free on 33rd minutes before Conor O’Brien and Alan O’Connor added a free apiece for Cahir to leave the score 1-6 to 0-5 after 40 minutes.

Then came a two minute period that would decide the game. Paddy Cadell burst through friend and foe to restore the lead to five before Shane Doyle added JKB’s last score of the game in the 42nd minute after good work in the build up from the impressive Nick Keane.

From here on it was all Cahir. They attacked in numbers and with no little skill. If they were guilty of anything, they possibly over-elaborated at times which gave the JKB backs the opportunity to intercept. Where JKB have kick passed their way through the blanket in the first half, Cahir were trying to run and hand pass their way through. Three of their last four points came from frees. The loss of Stephen Grogan late in the game to what seemed to be an ankle injury certainly didn’t help their cause. If he was there in the final few minutes to assist the likes of the fabulous McDonagh brothers, Nicholas Reidy, Kevin Grogan and Ger Quinn then who knows, the outcome may have been different.

That said you would want to be in the whole of your health to get through this JKB defence. Jack Prout struggled to make underage teams early in his career but is now probably the first name you write on the team sheet. It is no surprise that he has come to the attention of county selectors. Michael Egan is a master of the full-back brief while minors Tadgh Nolan and Lorcan Roche are two men that you wouldn’t mind being in the trenches with. Not only would they have your back they would probably dig the trench for you as well. They performed like veterans on the biggest stage of all and when re-enforcements were needed Radek Natkaniec and Conor Sheedy were there to provide the back up.

Referee Michael Duffy decided to add ten minutes of injury time. My heart nearly stopped a few times during this period. Just in case of emergency, I informed our own physio where the defibrillator was located.

When the final whistle eventually went, the electronic scoreboard read JK Brackens 1-8 Cahir 0-9. All heaven broke loose and Ger Roche headed to the car to get the bagpipes. The most annoying musical instrument in the world never sounded so sweet.

County under-21 champions for the second year in a row. For the three amigos, Jack Prout, Andrew Ormond and Nick Keane it was their 4th county football medal in exactly one year. That is surely a record that will never be broken.

Details of the celebrations are sketchy at best but that’s a story for another day!