The inaugural John Kissane Football Sevens is a massive success 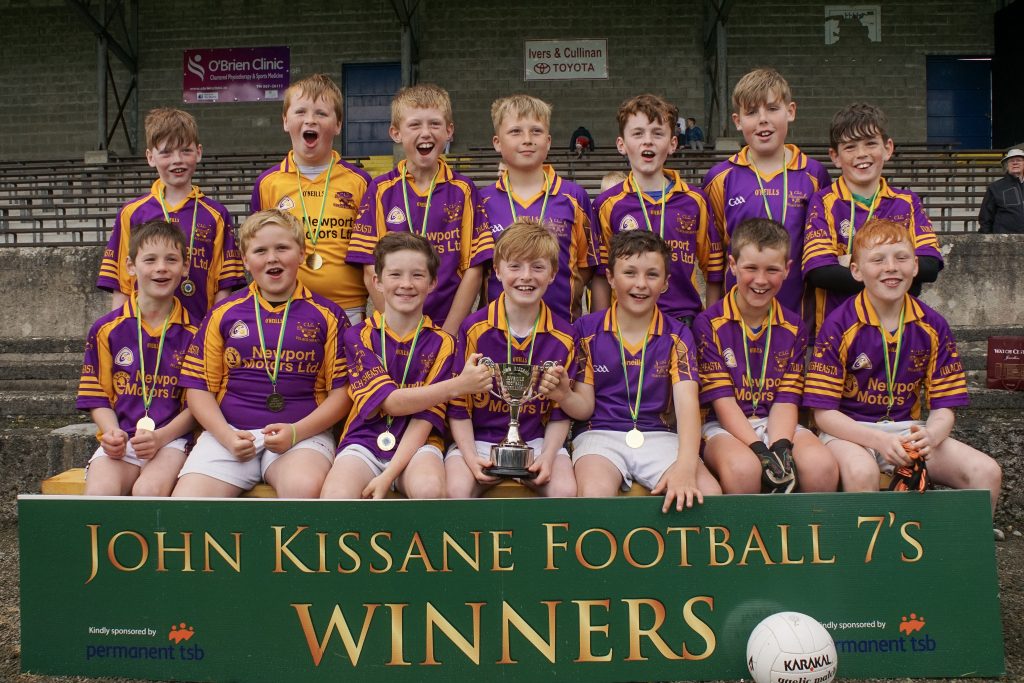 The June bank holiday saw a feast of football action in Nenagh Éire Óg’s GAA grounds with the inaugural hosting of the John Kissane Football 7s tournament. This competition is one of a wide number of initiatives planned in the recently published Tipperary Football Strategic Plan and named in honour of a man who worked tirelessly for the promotion of football in North Tipperary.

The day began at 1.30pm with an eleven-a-side under-11 juvenile tournament with eight clubs taking part. Nenagh Eire Og, Newport, Inane Rovers and Ballina competed in the Group 1 blitz with Kiladangan, Portroe, Moneygall and Upperchurch Drombane making up the Group 2 section. All teams played in a round robin format with a minimum of three games each and the top two placed teams in the group stages advancing to the final. In Group 1 Nenagh and Newport topped the table and in a highly absorbing contest Newport recovered from an interval deficit to win on a score line of 0-6 points to 0-3. 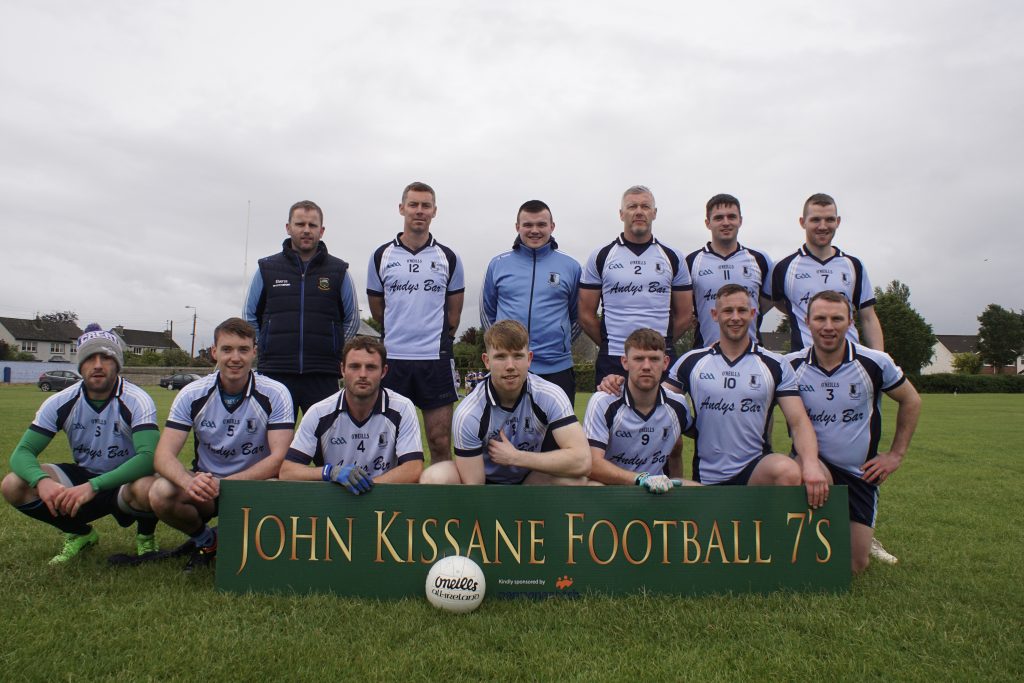 In Group 2 all teams had wins in the round robin stages, but it was Kiladangan and Upperchurch Drombane who topped the group with Kiladangan overturning the earlier result between both teams to run out deserving winners on a score line of 0-4 to 0-2. In an interesting twist on the normal rules, goals were deemed equal to points and score difference would not be used in the event of teams finishing on equal points. The idea behind this change was to keep games as equal as possible and avoid incentivising wins or losses for any side and help encourage equal game time for all panel members. In total over 100 children took part with the standard of play and enthusiasm on show a credit to all the clubs and their mentors. Refreshments for all teams was provided afterwards courtesy of the host club.

In the adult 7-a-side competition which begun at 5pm again eight teams participated, namely: Nenagh Éire Óg, Portroe, Kiladangan, Lorrha Dorrha, Newport, Sean Treacy’s, JK Brackens and Upperchurch Drombane. The format was like the juvenile tournament with two groups of four, but this time all teams competed for the same prize with the top two placed teams in each group proceeding to semi-finals. All games we hotly contested in the group stages which Kiladangan and Sean Treacy’s facing off on one semi-final and Newport playing JK Bracken’s in the other one. 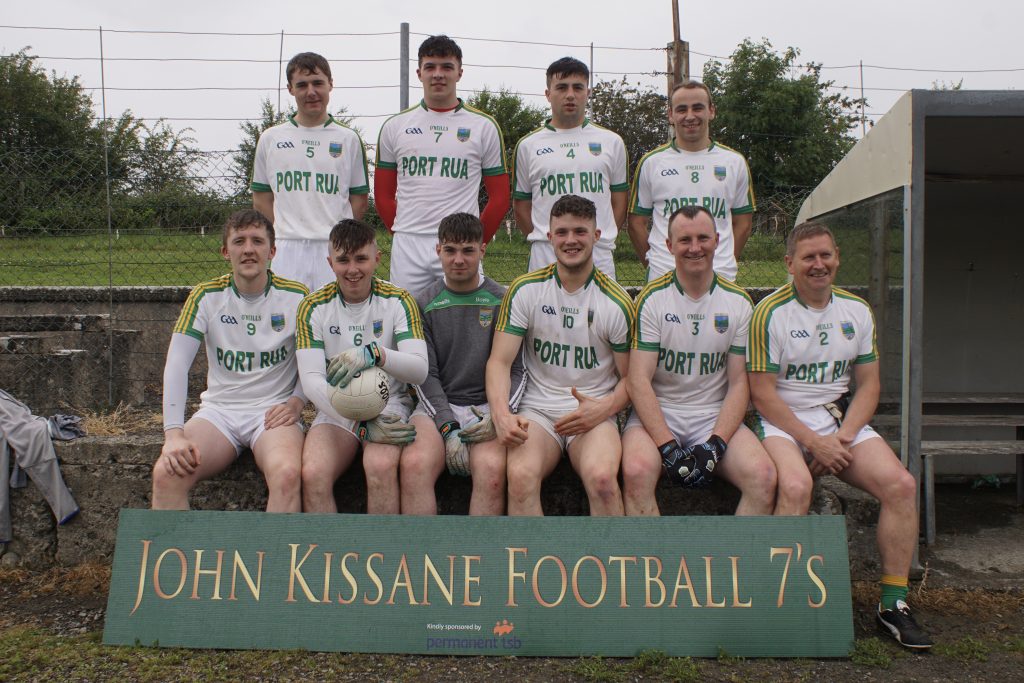 After two highly entertaining contests, amazingly both games ended up going to penalty shoot-outs.  With each team having three shots on goal, Kiladangan emerged victorious over Sean Treacy’s in the first semi, but it took sudden death to separate Newport and JK Brackens, with the Brackens eventually emerging as victors. After a short break to give both teams a chance to catch their breath both finalists served up a faced paced twenty minutes of all out attacking football with not a blanket defence to be seen. At the end of an absorbing encounter which saw the lead change hands on a few occasions, the Kiladangan team claimed the honours on a score line of 2-7 to JK Bracken’s 1-6. To rapturous applause their captain Fergal Hayes accepted the John Kissane Cup from the chairman of the Tipperary Football Committee, Barry O’Brien. The player of the tournament award went to Jack Kennedy from JK Brackens and was presented by Patsy Bonar, a lifelong friend of John Kissane and another great promoter of football in the Nenagh area. 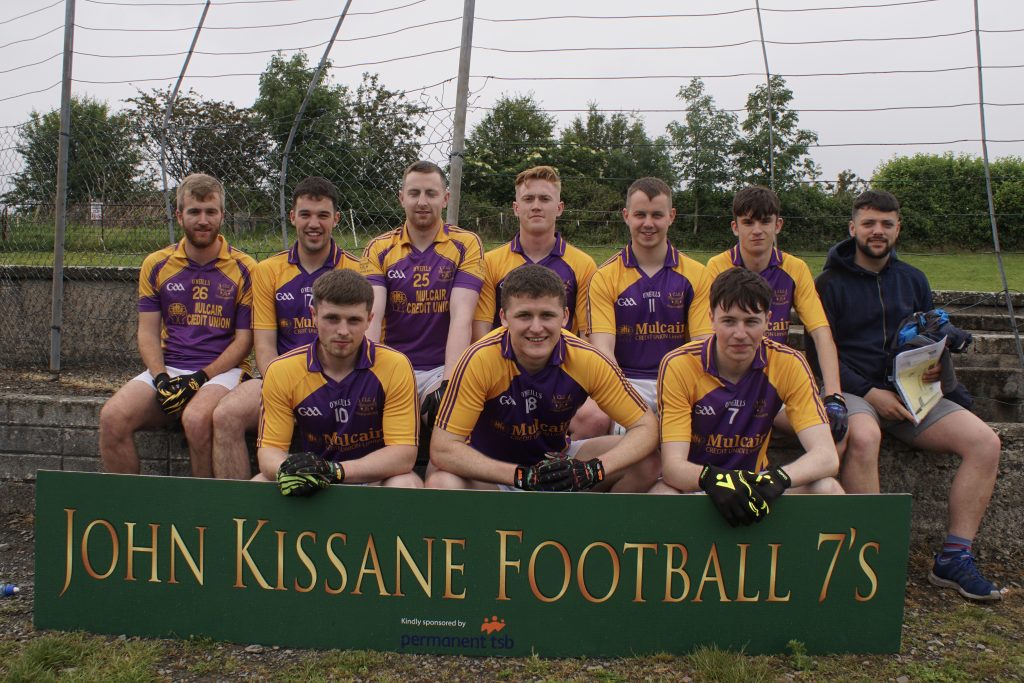 The organising committee would like to thank the all those who helped to make this event a success. Particular mention to the Nenagh Éire Óg Club and their members who were a great support throughout the day, Joe Mulqueen of Andy Flynn’s Bar & Restaurant who provided the food for the adult teams, Permanent TSB for their generous sponsorship, Alan Kissane, Tommy Ryan and Christy McLoughlin who gave up their Bank Holiday Monday to referee both juvenile and adult competitions, the Friends of Tipperary Football and the family of John Kissane’s for their support throughout. Finally, a big thanks to all the clubs and players who took part and helped make the day a success and laid the foundations for future years. 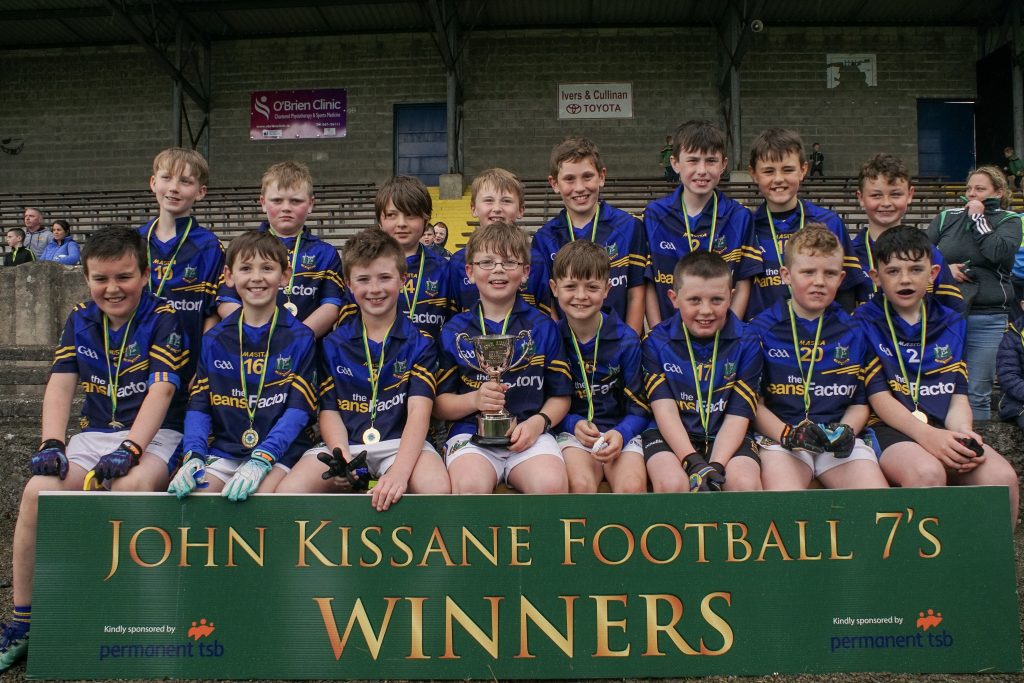 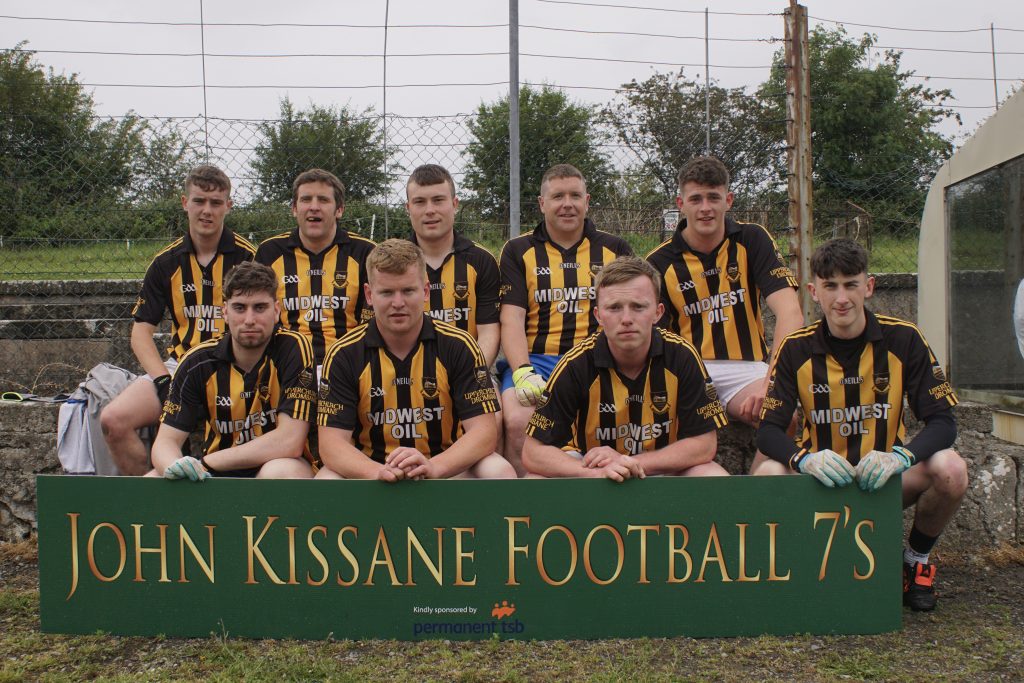 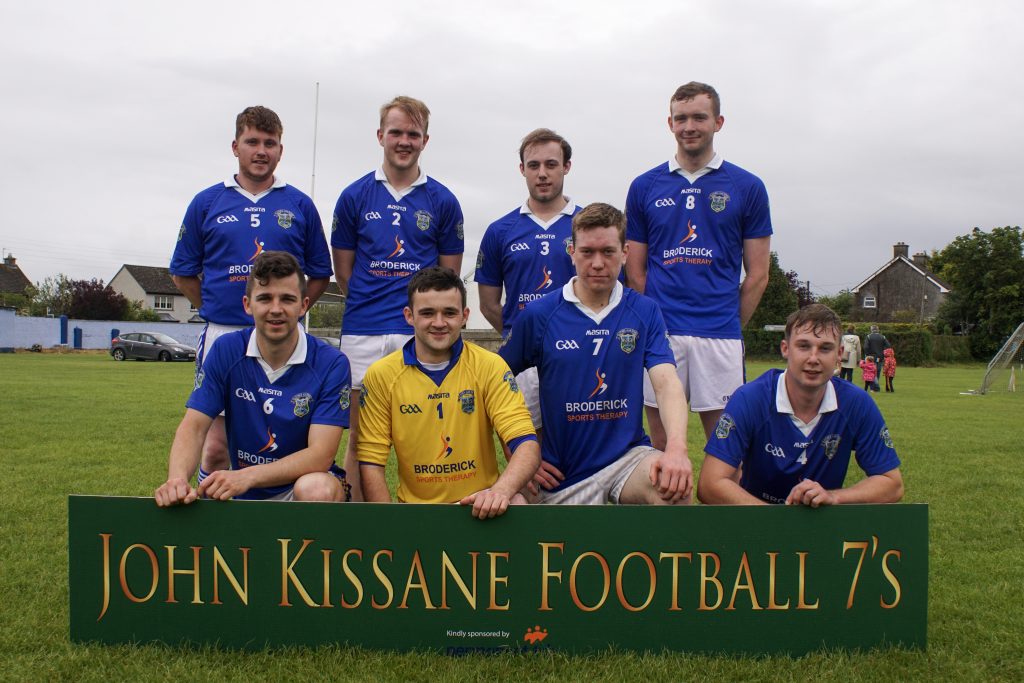 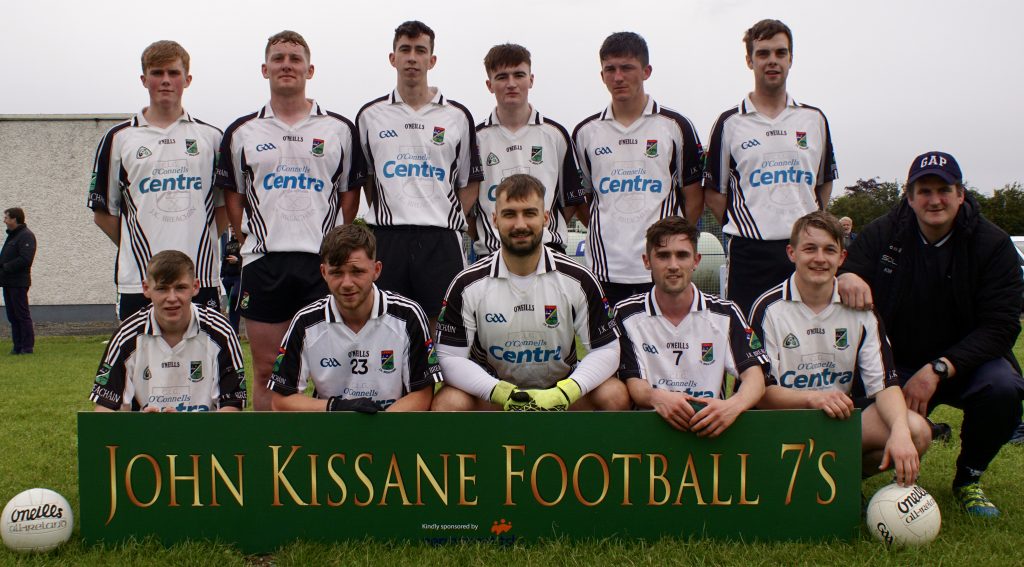 All photographs are compliments of https://www.sportsfocus.ie and further action shots are available to view and download for free here.