Kerry too Strong for Tipp 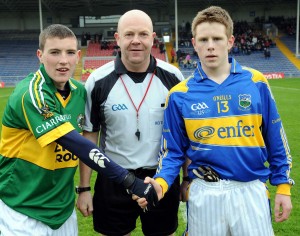 Shock winners over Cork in the semi-final, Tipp never got to the pace of the game against a Kerry side who had powered into a 0-8 to 0-1 lead by half-time. Indeed, the Kingdom’s lead would have been greater had they not shot seven wides inside the opening 20 minutes.

Tipp, who had lost to Kerry earlier in the campaign before coming through the backdoor, resumed for the second half with points from Thomas Hill and Liam Treacy, but by the 50th minute, the winners had opened up a 0-12 to 0-3 lead.

The Premier boys doubled their tally with three points in the last six minutes, but they were little more than consolation scores.