Kevin Mulryan Retires from football due to Injury 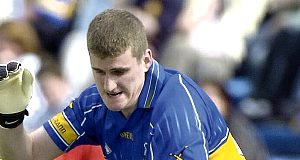 A persistent ankle injury has prompted the JK Brackens player to call time on a career in the blue and gold which dates back to 1999.

Ankle surgery in November 2009 proved unsuccessful and while Mulryan featured for Tipperary in league and championship this year, he was playing through the pain barrier.

“I had the operation last November and it didn’t really go according to plan. I came back late, played in the last two league games but I was struggling to get fit and playing through the pain. It wasn’t enjoyable and I was off the pace,” he said.

Mulryan made his Tipperary senior debut in the 1999 All-Ireland B championship on home ground, against Fermanagh in Templemore.

He dropped down to the junior intercounty ranks in 2000, while studying for his Leaving Certificate, before making his senior championship debut against Kerry in 2001.

The highlights of Mulryan’s career were successive promotions from Divisions 4 and 3 of the NFL in 2008 and 2009, and the 2005 Tommy Murphy Cup success at Croke Park.

Mulryan also won a McGrath Cup title in 2003, and also won a Munster minor hurling championship medal with Tipperary in 1999.

His final appearance for Tipperary’s senior footballers came against Dublin in the All-Ireland SFC qualifier at Croke Park last July.

Mulryan, a Garda based at Limerick’s Henry Street station, recalled: “I knew after the Dublin game that was it. I went back and saw the specialist and he said that the way the ankle was, is the way it’s going to stay. I decided then that’s it.

“I’m never going to be able to get up to the levels required for intercounty no matter what training I do. And there’s no point being there if I’m not good enough for that level because Tipp’ are in the ascendancy. I’ve also seen some people staying on too long and I didn’t want to go down that road.”

Mulryan, who will continue to play club hurling and football with JK Brackens, added: “I had a good innings. When I started, Declan Browne was a big inspiration around the county and my clubmate Sean Collum was a big role model. We should have won the 2002 Munster final (against Cork) and every year, bar one or two, we achieved something.”