The Friends of Tipperary Football extends its congratulations to Kiladangan’s Tom Kirwan who was awarded a Seana Gheal award by his native Wexford GAA. 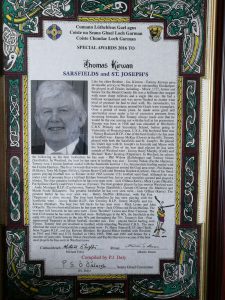 Kirwan, played minor, under-21, junior and senior in goals for the Model County and was an outstanding player for his Wexford town clubs, St Joseph’s and Sarsfields and also hurled for the famed Faythe Harries.

Tom, pictured with Kevin Mulryan, at the 2011 All Ireland minor football final

Later in life he moved to the picturesque village of Ballycommon and became involved with both Kiladangan and Tipperary. In 1993 he took the reigns of the Tipperary under-14 team and his knowledge was quickly recognised and he was a selector with the county minor teams from 1998 to 2000 before taking overall responsibility in 2001. In 2002 and 2003 he followed these players into the under-21 grade.

He also passed on his considerable understanding of the game to his adopted club Kiladangan and coached many juvenile teams in both football and hurling. His most notable success was capturing the county junior football title as manager of the North club in 1997. 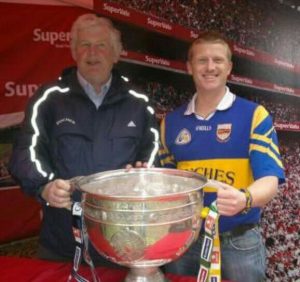 Tom, with his son Paul and the Sam Maguire trophy

His son Paul also represented Tipperary at under-14, under-16 and minor football while his other son Eric has played hurling for Tyrone.