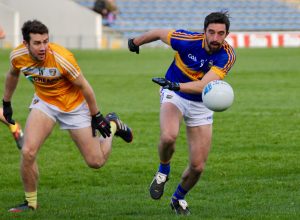 Martin Dunne has announced his retirement from inter-county football after making his senior championship debut for the Premier County against Down in 2012.

The Moyle Rovers’ man has been a central part of the Tipperary set up and featured regularly at midfield since first coming into the panel. His most memorable moment in the blue and gold jersey came in 2016 when Tipperary beat Cork for the first time in the championship since 1935, in his own words, “history was made”.

He recently commented that Peter Acheson was the footballer that impressed him the most pointing out that “his competitiveness and all round skills of the game are amazing”. Outside of GAA Sonny Bill Williams and Conor McGregor are two sports people that he admires “because of how they train”.

Tipperary selector Shane Stapleton commented that “Martin was the most committed man that we ever had on the panel”, “he played a key role in our great run to the All-Ireland semi-final in 2016 and he just did everything right, in training, in matches and in his preparation”.

Martin will be missed around the Tipperary camp and we wish him the very best in his retirement.