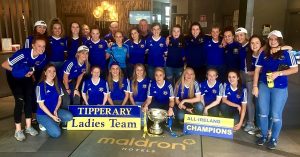 Hundreds of people turned up to greet the victorious Tipperary LGFA team as they returned to the Premier following their exploits in Croke Park yesterday and it was no more than they deserved.

During the year they set the remarkable record of being the only GAA team to go through 2017 undefeated as they claimed both the Division Three league title as well as the All-Ireland intermediate title.

Among the crowd were comedy duo The 2 Johnnies who entertained all with songs from the stage.

For a look at the remarkable scenes check out The Nationalist’s video here.

Big crowd in Ardfinnan tonight welcoming the @TippLadiesFB All Ireland champs home. Great work by lads in @ArdfinnanGAA setting up all day 👍 pic.twitter.com/BOzceTR1iZ

@TippLadiesFB happy scenes from a great reception in Ardfinnan pic.twitter.com/XIaIk7ofMi