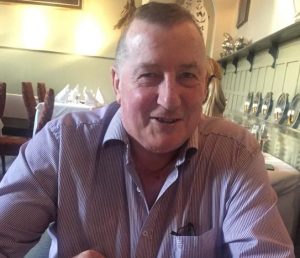 Seán Kearney was born in Whitefield, Loughmore in 1946. He played Gaelic football and hurling with the club and Templemore CBS where he won almost every honour in the game. In 1964 when Loughmore were joined with Moyne-Templetuohy he captained the minor football team to Mid and County honours. He also won Minor and U-21 hurling County titles. He won three Senior Football County titles with Loughmore Castleiney in 1973, 1977 and 1979 captaining the side in 1979. These added to his many Mid Tipperary titles.

On the county scene Seán played at all levels in football. He won a Division 2 League Final in 1970. He played for Munster from 1969 and finally won a Railway Cup medal in 1975 along with club mate Eddie Webster. This was no small feat to be included alongside some of the Cork and Kerry greats of the era.

In latter years when work commitments took him south of the county he was adopted by the Ballyporeen GAA club where he played and subsequently became Chairperson of the club.

Reposing at the Parochial Hall, Ballyporeen from 5pm to 8pm on Saturday, 28th December. Requiem Mass 11am Sunday in Church of the Assumption, Ballyporeen. Followed by burial at St. Mary’s Cemetery. Family flowers only please.