This Sunday the Tipperary senior footballers welcome Sligo to Semple Stadium for the second round of the Allianz National Football League, Division Three with throw in at 2pm.

Following on from last Sunday’s win over Antrim, Liam Kearns’ side will be hoping to continue their winning form and strengthen their promotion hopes to Division Two.

These two counties have only met twice in senior championship action, the first of which took place in 1923 when the Westerners were victorious on a 1-8 to 0-7 score line. Incidentally, while the game took place on September 9th, 1923, it was actually the 1922 championship and many of the Tipperary players would also have played in the infamous clash with Dublin on Bloody Sunday 1920.

Our last meeting with Sligo in the championship was Round 2 of the qualifiers in 2009 when Sligo, despite a late Tipperary fightback, prevailed by the narrowest of margins 1-13 to 1-12. With 44 minutes gone on the clock the Yeats county were in a comfortable nine point lead but the home side outscored their opponents 1-6 to 0-1 between the 46th and 64th minutes. A late Michael McNamara score extended their lead back to two and, despite a Hugh Coughlan point, Tipperary couldn’t draw level. The only other championship encounter between the counties, in any code or grade, was the 1935 junior football All Ireland final which Sligo also won 4-2 to 2-5.

The teams and scorers from 2009 are as follows: 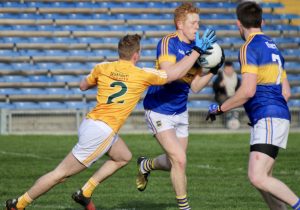 We wish to thank all patrons who kindly purchased Friends of Tipperary Football membership outside the stand prior to throw-in and of course Kevin McLoughlin, Eddie Ryan and Aidan McNamara for kindly giving up their time to sell membership. This is a crucial fund-raiser for our inter-county footballers and the lads will be there again this Sunday.

Membership, which costs €20, enters people into the following fantastic draws: