Heading into this evening’s match Tipperary were under no illusion that a defeat would leave them staring down the barrel of relegation and they played as such, tackling splendidly, kicking some great scores and slowing the game down with clever possession football when it was required.

Right from the moment referee Niall Cullen threw in the ball to commence the game the home side took control and within five minutes were 0-3 to 0-1 to the good with points coming from Josh Keane, Liam McGrath and Conor Sweeney. The fact that Tipperary never trailed their opponents tells its own story however, by the end of the opening quarter it looked as if we were in for a right royal battle as Meath had leveled the game 0-4 apiece.

From here Tipperary pushed on and kicked four fine points the open the gap to 0-8 to 0-4.  A 20th minute Conor Sweeney free restored the lead for Tipperary, one they would hold until the end. This was followed by fine efforts from Quinlivan, Sweeney and a terrific long-range effort from midfielder Liam Casey.

Approaching the break that man again Michael Quinlivan scored yet another cracking goal to demonstrate why he is one of the most feared forwards in the game right now. In fact, following the Roscommon game earlier this month The Nenagh Guardian’s Shane Brophy tweeted, when describing his goal in that match, that “he doesn’t do ordinary ones” and once again he managed to score a beauty that only the rest of us mere mortals can dream about doing. Ballyporeen’s Conor Sweeney launched a high ball in towards the Meath goal and somehow, under pressure from goalkeeper Andrew Colgan, he gained possession before holding his nerve to find the space and rifling to the back of the net to give Tipperary a 1-8 to 0-5 lead heading into the break.

Tipperary fans began to wonder if another fine lead was about to be thrown away as the visitors had their finest spell of the game when Padraig McKeever, James McEntee and Graham Reilly kicked three unanswered points as they tore into the second half but Bill Maher showed that Quinlivan isn’t the only Tipperary forward that can score fine goals as he soloed into the heart of the Meath defense and kicked a blistering low shot to the net in the 48th minute to settle any Premier nerves.

Conor Sweeney kicked two pointed frees before Steven O’ Brien and James McKeever swapped points. Sweeney had another on the board to open the lead to nine but then Bryan Menton scored a Meath goal. Memories of Roscommon’s late revival however were quickly dashed as the home side maturely held possession and worked the ball up the field for both Sweeney and substitute Seán Carey to score to leave the proceedings at 2-15 to 1-10 at full time.

Tipperary’s next opponents are Louth who visit Semple Stadium on Sunday next at 12.30pm for a double header with the senior hurlers who play Cork straight after.

The most vocal Tipperary supporters in Semple Stadium this evening 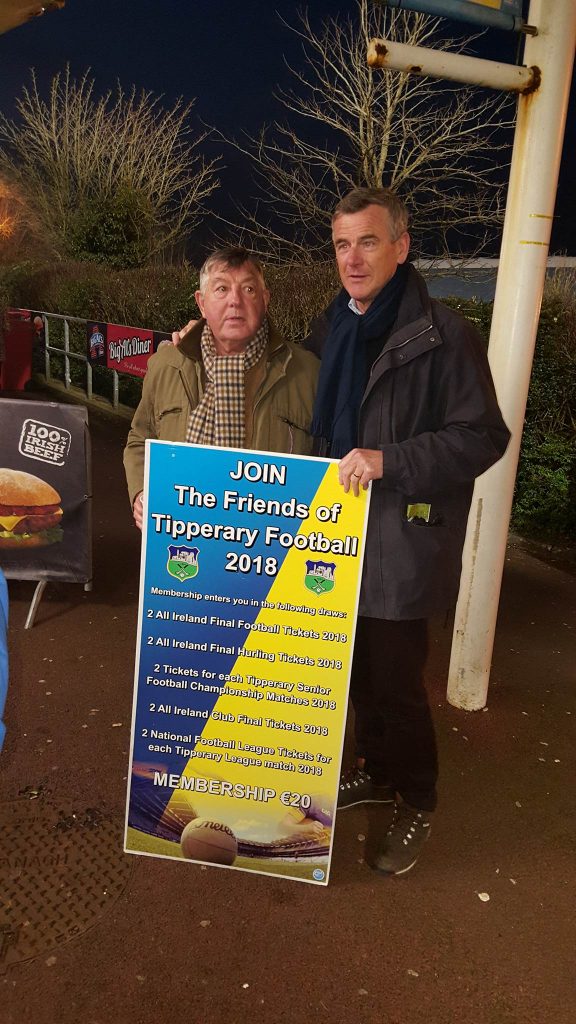 Two new recruits for the Friends of Tipperary Football

There were many happy Tipperary supporters leaving Semple Stadium this evening but none more so that Kiladangan’s Ben Kirwan as his hero, Evan Comerford, presented him with his match gloves. To say Ben was thrilled at Evan’s generosity is an understatement. Well done Evan