Tipp Win Out in Close Encounter 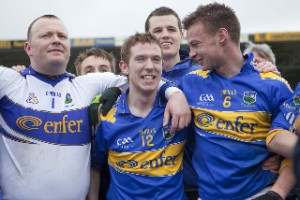 There were two red cards, two penalties and a spirited comeback but in the end Tipperary held out for a narrow victory over Louth in a dramatic All-Ireland football qualifier encounter at Drogheda on Saturday.

The Premier County were on the road for a comfortable when they led by seven points in the second half but in the end they were hanging on to hold off the Wee County.

That will be little solace to Louth, however, with memories of a similarly futile late revival against Laois three weeks ago all too fresh in the memory.

Barry Grogan was the star man for Tipp in the first half, helping himself to a personal tally of 1-4 in the opening 35 minutes as the Division Three league champions opened up a six-point interval lead (1-8 to 0-5).

The Wee County spurned a gilt-edged opportunity to get back into contention from a penalty in the early stages of the second half.

Tipperary goalkeeper Matthew O’Donnell was sent off by referee Syl Doyle for a dangerous foul on Colm Judge inside the large parallelogram but JP Rooney stroked the resultant kick wide to the delight of replacement netminder Paul Fitzgerald.

Louth were also reduced to 14 men minutes later, with Derek Crilly red-carded for a second bookable offence, and when Philip Austin raised Tipp’s second green flag, the writing was on the wall for the home side.

Nevertheless, they produced a spirited revival in the closing stages, with Rooney leading the way.

He held his composure to net a second penalty and also scored two points, but it was too little, too late as John Evans’s men held on to book their place in the second round draw.