Tipperary Are Promoted to Division Two

It was the kind of win we all dreamed about as children. Scoring a hat-trick of goals, the last one deep in stoppage time to win your side the match. And today, not for the first time, Michael Quinlivan did just that. 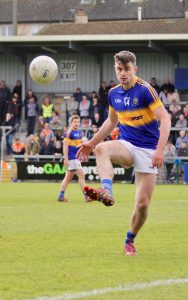 Entering stoppage time Tipperary were down four points and victory looked an unlikely proposition but this Tipperary team simply does not know when it is beaten. Poise, composure and a never say die attitude sustained these players in the crucial five minutes of time added on when they outscored their opponents 1-03 to 0-1 to claim as dramatic a win as you’re ever likely to witness.

The Armagh GAA twitter account ran with the hashtag #pipthetipp all week but it was Michael Quinlivan’s goal that ensured it was Tipperary who in fact pipped Armagh to spark wild scenes of celebrations. Quinlivan has a habit of doing just that as his finish was very similar to the one that captured Clonmel Commercials famous Munster club final victory over Nemo Rangers.

Liam Kearns made three changes to his starting line up prior to throw in with Shane O Connell replacing Willie Connors, Colm O Shaughnessy coming in for Jimmy Feehan while flu victim Liam McGrath made way for George Hannigan.

Tipperary started the game brightly and led their opponents 0-3 to 0-2 at the half way stage of the first period. In fact the lead could have been more but for the brilliance of Blaine Hughes in the 14th minute who dived full length to divert a Michael Quinlivan goal bound effort out for a ’45 which Kevin O Halloran converted. However from here on in the home side began to dominate picking off five unanswered points heading into the break. Things were beginning to look a little bleak for the Premier and when a leader was required up stepped Brian Fox. The captain collected possession in the Tipperary half and burst forward, forcing the Armagh defence into committing a foul which Kevin O Halloran duly converted. This pointed free proved crucial as it gave the team a much needed lift at the interval after being held scoreless for over twenty minutes. 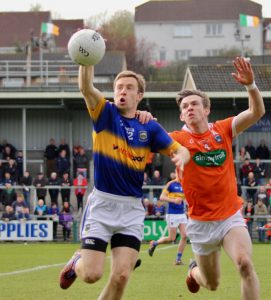 Fox started the second as he ended the first marauding forward and delivering a fantastic long, high, dropping ball into the grateful arms of Quinlivan who side-stepped the full back before blasting home Tipperary’s opening goal. Minutes later again Quinlivan goaled after great work from George Hannigan and Conor Sweeney. 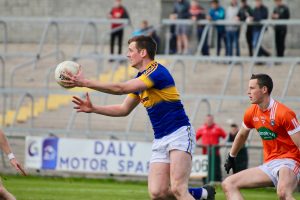 These two goals should have been the platform that Tipperary built a solid win upon but Armagh introduced Ciaran McKeever into the fray and he double marked Quinlivan along with Charlie Vernon. This steadied the Armagh defence and they restricted the Tipperary attack. 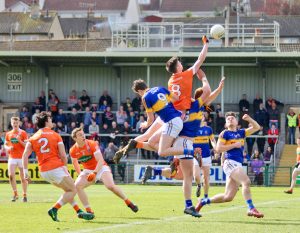 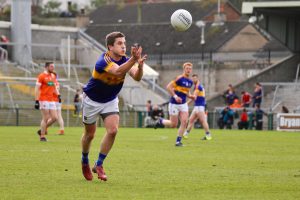 Tipperary now, not only look forward to Division Two football in 2017 but also a trip to Croke Park next Saturday for the league final against Louth. 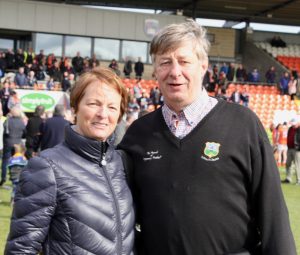 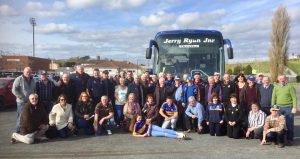 Promotion was vital for this bunch of players so massive congrats to @TippfootballGAA, great to be playing in Croker again 👏

Finally this team deserves huge support. What they have done in recent years has been remarkable. They have another league final this weekend coming and we ask you to please do your part by coming to the game if at all possible and joining the Friends of Tipperary Football. It only costs €20 and all the players and management really appreciate your support. Please click the Join tab at the top of this page and help this amazing panel achieve further success.