Tipperary Club Fixtures and Other News

This weekend promises to be a feast for the followers of Gaelic football in the Premier county with several major club competitions down for decision. 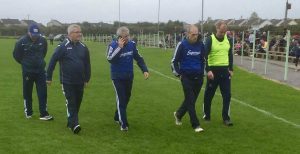 Firstly, in the intermediate final Kiladangan will be hoping to become the first North Tipperary senior football side since Nenagh Éire Óg in 1998 by winning and gaining promotion to the senior ranks. Backboned by former captain of the Irish International Rules schoolboys team which defeated Australia 2-1 over the course of the series, Darragh Egan and current Tipperary senior footballer Willie Connors, the Puckane based outfit will provide formidable opposition to South side Clonmel Óg. However, the South men will have plenty of reason to feel confident themselves having captured the County Football League Division Two title earlier this year following an impressive 4-16 to 0-10 win over Golden Kilfeacle. Their impressive attack, managed by the diligent Colm Purcell, caught the eye with nine different men all scoring that day with team captain Darragh Kearney, leading by example, the most influential player on display. Clonmel Óg last won the title in 2008 and will be hoping to capture it again this year and return to the senior ranks.

In the minor final, the amalgamation of Golden Kilfeacle and Galtee Rovers will be hoping to complete an historic back to back of titles after they stunned Clonmel Commercials in the decider last year following a very late Daire Egan point which sealed the win. This year Moyle Rovers will be gunning for their fifth ever title having previous secured the Michael Hogan Cup in 1984 and 1987 with an amalgamation with Grangemockler and in 2003 and 2008 on their own. Both sides feature an array of stars from this year’s under-17 and under-18 panels so this promises to be an intriguing clash. 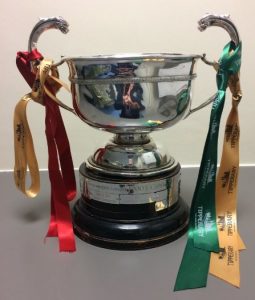 The senior final pitches sixteen times champions Clonmel Commercials and newcomers Killenaule in an all-South affair. Killenaule, having lost the hurling deciders in 1932 and 1942, are remarkably playing in their very first county senior football final and a lot will depend on how they manage the occasion but with very experienced players like Jimmy Feehan, John O’ Dwyer and Kieran Bergin in their ranks they have plenty of big game players. Clonmel Commercials won the Munster title in 2015 and should they win on Sunday they will endeavour to at least repeat that amazing feat. For a superb preview of this game please see Brian McDonnell’s article in the Tipperary Star here.

We also wish to congratulate the LGFA teams of Cahir and Clonmel Commercials who have advanced in their respective Munster championship campaigns and commiserate with Fethard who unfortunately lost to Aghada of Cork over the weekend.

It seems that the Tipperary LGFA team are the gift that keep on giving. Firstly, we extend our congratulations to Cahir’s Aisling McCarthy who, for the second time in her career, won the WGPA Player of the Month Award, for her sterling display in the All-Ireland intermediate final against Tyrone. McCarthy, who held off stiff competition from Emma Doherty (Derry) and Noelle Healy (Dublin) for the accolade, notched up a personal tally of 1-4 which included her amazing goal in the 18th minute. Congratulations Aisling on a fine achievement.

Secondly, her club mate Aishling Moloney has won the hearts and minds of sports fans the length and breadth of the country in recent weeks. In the immediate aftermath of the All Ireland senior LGFA final she posed as a photographer so that she could enter the field at Croke Park, following Mayo’s loss to Dublin, in order to console her housemate and friend Sarah Rowe who was a member of the beaten Mayo side. 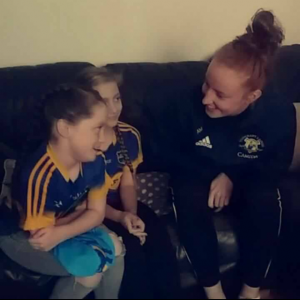 However she went above and beyond the call of duty last Saturday when she paid a visit to Aoife Doyle Herlihy. Aoife was enjoying the game from the Davin Stand and at the full time whistle, Aishling booted the ball high into the stand as the well deserved Tipperary celebrations commenced. Aoife collected the ball and thought she had a prized possession from the game however a Croke Park steward took it from her and broke her heart. Aishling, upon hearing the news, made it her business to visit the little lady and present her with a signed Tipperary training top and showed her some of the finer skills of Gaelic football. 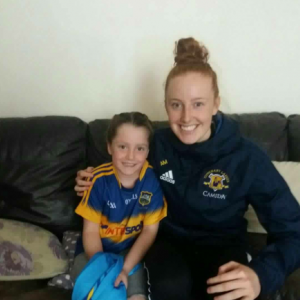 This story encompasses everything that is great about Gaelic games and the selflessness of our stars. Cahir and Tipperary are blessed to have such a wonderful role model in Aishling Moloney and we have no doubt, following her kind intervention, that we will also see Aoife don the blue and gold in years to come. 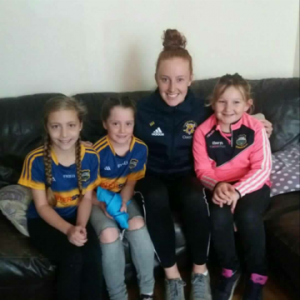 Our September Ladies Football Player of the Month:
Aisling McCarthy – @TippLadiesFB. #WGPApotm with @Elverys.
Thanks to all who voted. pic.twitter.com/cNS7sQa72i