We extend our best wishes to the Tipperary LGFA team in their TG4 All-Ireland intermediate final tomorrow against Tyrone.

Shane Ronayne and his team play Ulster side Tyrone tomorrow in Croke Park at 13.45 in the TG4 All-Ireland intermediate final.

Tipperary’s last success at this grade came in 2008 when they secured a 0-14 to 1-8 win over Munster rivals Clare played in Croke Park. That day it was Edel Hanley who was the star of the show kicking over a personal tally of 0-10 as Paddy Morrissey’s heroines kicked six unanswered points in the final quarter to turn a goal deficit into a three-point winning margin with captain Angie McDermott securing the honour of the TG4 Player of the Match accolade. 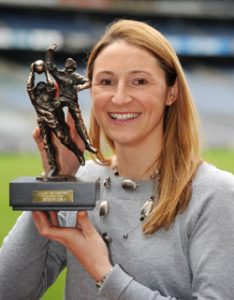 Having overcome the challenge of Wexford in the quarter-final (whom they also defeated earlier this year in the league final) and Meath in the semi-final tomorrow’s game promises to be a mouth watering clash, one not to be missed and details of tickets for the game can be accessed here.

For those who can’t make the trip, the game will be broadcast live on TG4 and the station will also show the junior final between Derry and Fermanagh as well as live coverage of the senior decider between Mayo and Dublin. Derry incidentally will be captained by Tipperary native Cait Glass and we wish her and her team the very best in their final.

The Tipperary team to line out tomorrow has been named by manager Shane Ronayne:

#Tipperary captain Samantha Lambert excited by the challenge that only an All-Ireland final can pose – https://t.co/NXyrANd97B @TippLadiesFB

I remember looking on to some of the girls, looking up to them and getting autographs of them' https://t.co/kvRC8OYD5n pic.twitter.com/ByO9b2U5t0