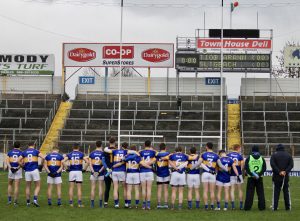 Following on from last week’s win over Antrim, Tipperary entered the contest full of confidence but it was the visitors, who drew with Armagh in their opening league encounter, that started brightly and in front of 749 spectators they registered two first half goals through Kyle Cawley and Niall Murphy. 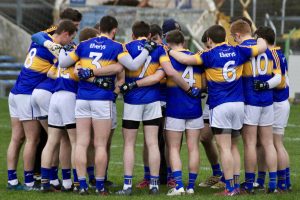 Cawley’s shot beat Evan Comerford in the ninth minute after great approach play from wing-forward John Kelly, who fed Niall Murphy and in turn he found the goal-scorer who left the Tipperary net-minder with no chance. Murphy and Cawley again combined for their second goal eight minutes from half time with the former blasting home this time. 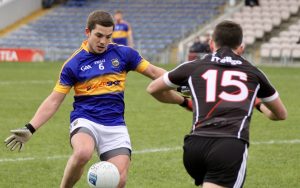 Robbie Kiely sets up another attack

Things got worse for the Premier men in the second period when in the 45th minute Jimmy Feehan saw two yellow cards end his involvement and Philip Austin was stretchered off after scoring a very brave point in the 66th minute following a collision with Sligo goalkeeper Aidan Devaney. 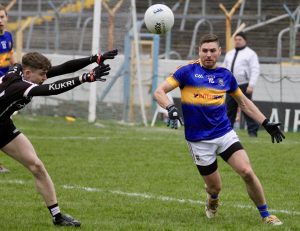 We wish Philip Austin a speedy recovery from injury

A Michael Quinlivan goal sparked a Tipperary revival with seven to play and they did manage to cut the margin to one but following Kevin O Halloran’s pointed 45, eight minutes into injury time, referee Niall Ward elected to blow the full-time whistle. 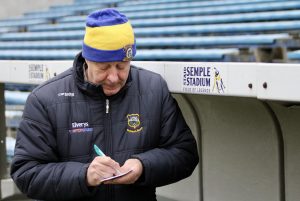 Up to this point the Yeats county were well on top and even led by ten midway through the second period however Tipperary’s spirited fightback just fell short as they unfortunately ran out of time in a frightfully freezing Semple Stadium. 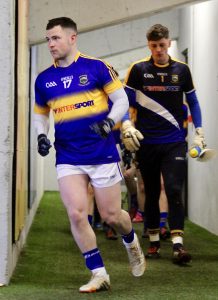 Liam Kearns’ men now have two weeks to prepare for their next game, an evening time clash with Laois, in Portlaoise on Saturday February 25th, who are managed by former Tipperary boss Peter Creedon.

We wish to thank all spectators who took out Friends of Tipperary Football membership prior to the game today and especially to the six volunteers who kindly gave up their time to help sell it.

Membership, which costs €20, enters people into the following fantastic draws: