Tipperary overcome Laois in Round 3 of the Allianz League

Tipperary deservedly overcame a determined Laois side this evening in Portlaoise but a 60th minute Laois goal tested Tipperary’s resolve. 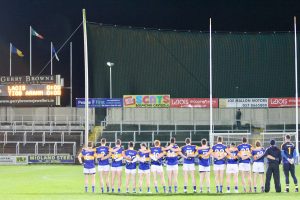 Having struggled in the opening quarter of their first two games Tipperary, this time, exploded out of the blocks and raced into a three point lead by the 10th minute. Laois struggled to make any impact on the Tipperary defence and went sixteen minutes without troubling the scoreboard operator during the opening period of the first half but a late fightback left the half time score 0-5 to 0-6 in favour of the visitors.

Tipperary suffered a further setback in the opening period when full forward Michael Quinlivan was substituted after receiving treatment a number of times following a late tackle very early in the game and we wish him a speedy recovery.

Laois managed to draw level moments into the second half but points from Philip Austin, Conor Sweeney and Liam McGrath saw Tipperary regain a lead that they would not surrender. 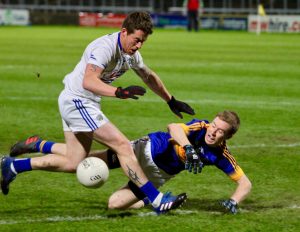 Net-minder Evan Comerford was in fine form making two superb second half saves from both Donie and Paul Kingston. Donie’s misery continued shortly after when he was black carded by referee Niall McKenna. 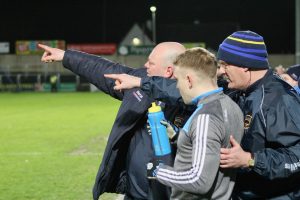 Its over there!!! Kevin Fahey receiving instructions from Paul Fitzgerald and Liam Kearns

In the 50th minute a brilliant David Conway goal gave the home side serious hope as they reduced the gap to the minimum but Tipperary from here on in showed great maturity and ball-keeping skills as they refused to panic as Liam Casey, Emmet Moloney and Kevin Fahy all pointed before a late Kevin O Halloran free, came out of the floodlights and deceived Laois goalkeeper Graham Brody, somehow crawled over the line to give Tipperary a deserved six point win.

Liam Kearns’ men now look forward to a clash with Longford next Sunday in Semple Stadium and will hope that they can avenge last years defeat to the same opposition which severely dented our promotion hopes. 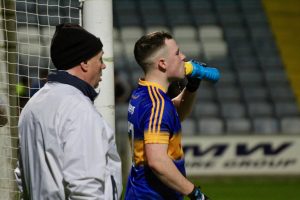