Tipperary Overcome the Challenge of Longford in Round 4

A blistering start saw Tipperary score 2-2 to 0-1 in the opening six minutes with both Conor Sweeney and Jimmy Feehan blasting home to and give the Premier a platform which they never relinquished although Longford did push them hard throughout.

Wingback Jimmy Feehan found the unmarked Conor Sweeney and the Ballyporeen man made no mistake leaving Paddy Collum with no chance in the Longford goal. Feehan himself goaled moments later following great work from Josh Keane.

A Longford fightback towards the end of the first-hard saw them rattle off six unanswered points to leave four between the sides at the interval, 2-10 to 0-12.

It was the switch of Michael Quinlivan to midfield shortly after the re-start that proved pivotal as Tipperary began to dominate the area as the second half wore on. Longford battled bravely and were anxious not to suffer a similar humiliation to their 17-point loss they experienced on their last championship visit in 2014 and it took a palmed Sweeney goal nine minutes from time to settle any Tipperary nerves. 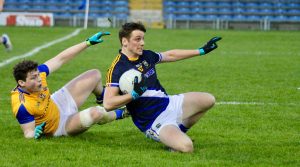 Conor Sweeney finished the game with 2-7

Tipperary now look forward to a trip to Tullamore next Sunday where they will face Offaly in their fifth game of the league.

Martin, Caitriona and Jimmy Morris from Nenagh enjoying the game