Yesterday the Friends of Tipperary Football launched a campaign to get 100 online members by throw in on Sunday against Roscommon and so far the response has been phenomenal with fifteen joining yesterday evening alone.

Please help us make it happen by joining the Friends at https://www.friendsoftipperaryfootball.com/join/

And encourage all your family and friends to do likewise! 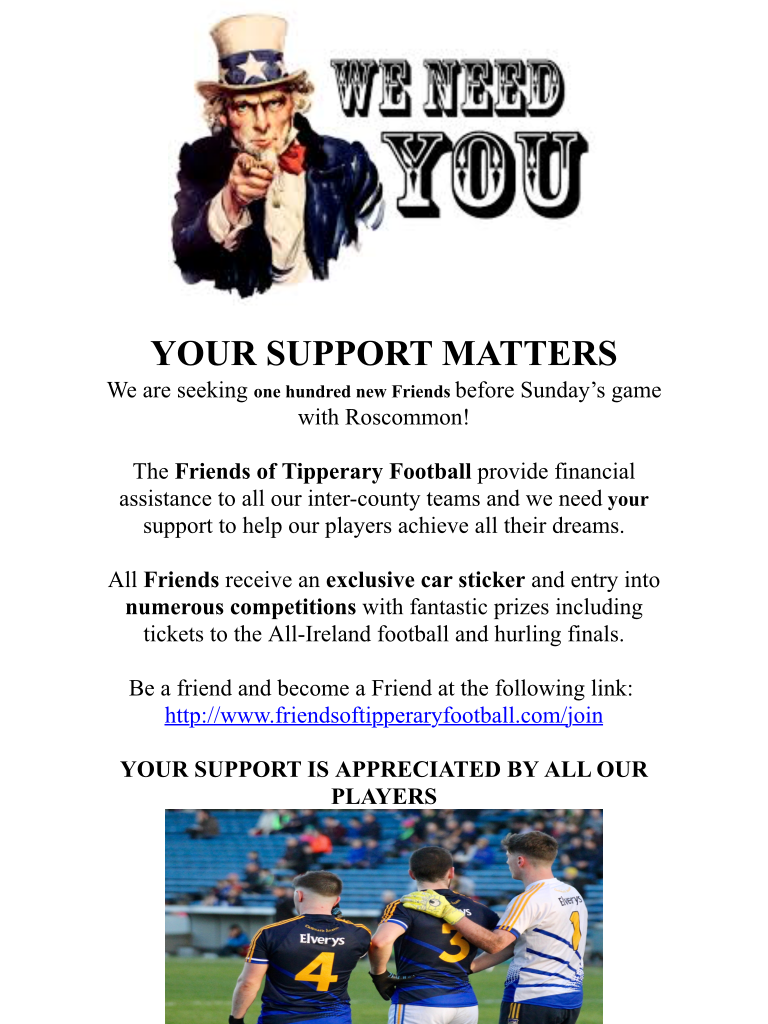 Sunday’s Allianz National Football League clash between Tipperary and Roscommon promises to be an intriguing affair between two footballing sides on an upward trajectory.

While the counties have only met once in the championship, the Tommy Murphy Cup semi-final in 2005 which Tipperary won 0-15 to 0-11, it is the All Ireland minor semi-final of 2011 which has most relevance to Sunday’s match. Tipperary prevailed 1-11 to 0-12 and many players have since progressed to the senior ranks. Goalkeeper Colm Lavin along with David Murray, John McManus and Enda Smith all featured that day and went on to play in last summer’s Connacht final in which Roscommon simply stunned Galway with attacking flare and resolute defending and pulled off a memorable victory which proved that provincial titles have not lost any of their gloss since the introduction of the back door. While the number who have played with Tipperary in recent times is even more impressive with Evan Comerford, John Meagher, Steven O’ Brien, Ian Fahy, Bill Maher, Liam McGrath, Michael Quinlivan and Jason Lonergan currently part of Liam Kearns’ panel. 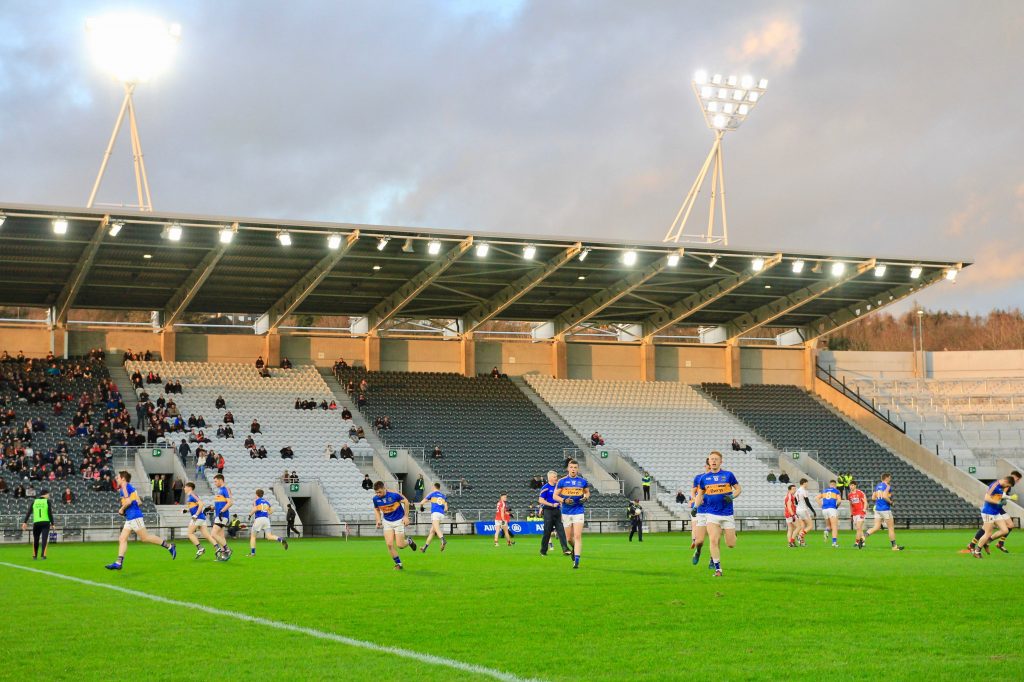 Both counties have in recent times lit up the football championship and caught the imagination of the public. Roscommon, in the aforementioned Connacht final, produced a magnificent display that had many people talking with superlatives and they were unfortunate not to qualify for the All Ireland semi-final after drawing with Mayo. While things did not go their way in the subsequent replay their performances certainly gives their supporters cause for optimism. Tipperary themselves created many magical moments when they reached the All Ireland semi-final two years ago for the first time since 1935 and followed this up in 2017 winning both promotion and the Division Three league title.

Both teams are blessed with dynamic managers who inspire belief and performances from their players. Kevin McStay, a two-time county championship medalist with Ballina Stephenites and one-time winner with Roscommon Gaels, has managed the Roscommon minors in the past before winning a Connacht under-21 title with Mayo in 2001. He also led Roscommon Gaels to a county championship before guiding St. Brigid’d to the All-Ireland club title in 2013. Liam Kearns has a wealth of managerial experience and led Limerick to two Munster under-21 titles and also took charge of their senior team for six years making them one of the top teams in the country. An All-Ireland minor medal winner with Kerry in 1980, Kearns won a county championship with Austin Stacks in 1986 and took charge of the Aherlow side which won the Tipperary championship in 2010. He has overseen an upturn in the fortunes of the Tipperary senior team since his appointment in 2016.

Last weekend’s results mean both sides go into Sunday’s contest with a certain degree of confidence and optimism. Tipperary recorded a rare win over Cork in Páirc Uí Chaoimh while Roscommon will be disappointed that they did not defeat Meath but will be relieved that they didn’t lose either. A win Sunday will set up either side for a push for promotion and help ensure the dreaded drop is avoided. 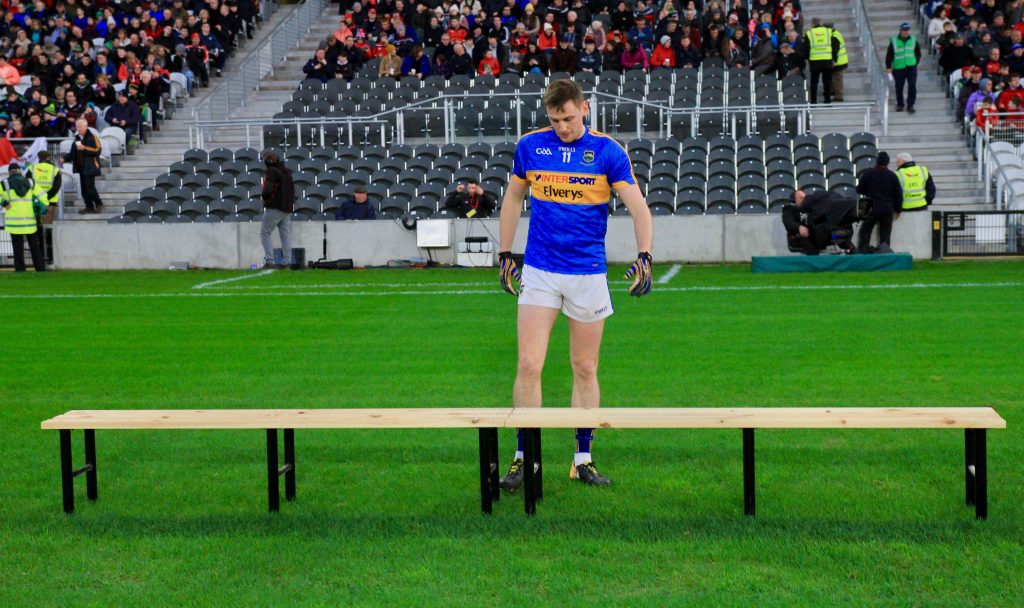 “I’ll beat them on my own”. Conor Sweeney is in confident mood prior to last Saturday’s game

He is fast becoming one of Tipperary’s most recognisable supporters and even penned a wonderful article for the 2018 Tipperary GAA Yearbook. Kevin Hanly is at just about every Tipperary GAA match, football and hurling, and is as passionate a fan as you’ll meet anywhere in the country. He recently became the subject of short documentary where he detailed his life so far and how Tipperary GAA has helped him become the man he is today.

Take a look below and say “hi” next time you see him in Semple Stadium. 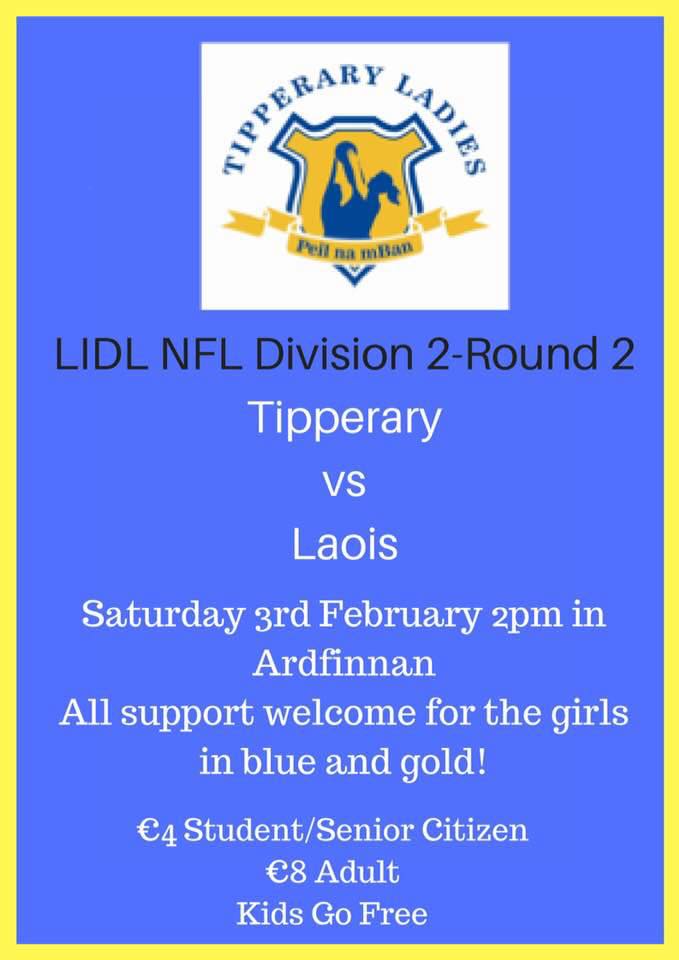