There’s little doubt about it but Kevin Hanly is arguably Tipperary’s greatest supporter. Regardless of the venue or weather, if the Tipperary footballers are playing, Kevin will be there. 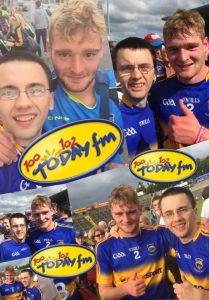 He is usually one of the first supporters to race onto the pitch to celebrate with, or console the players, following a match and he has become a firm favourite amongst the panel. The players are delighted to pose for photographs with him and Kevin, in an interview with www.sportsjoe.ie last summer commented “I can’t speak highly enough of all the Tipperary football players, their generosity and perseverance is admirable but they are also the most humble group of players you will ever meet and always make time for their supporters, which doesn’t go unnoticed”. 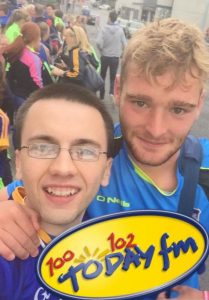 One of Kevin’s most cherished possessions is the number eight jersey worn by Moyle Rover’s clubman Peter Acheson following the Premier county’s win over Galway in the All Ireland quarter final in Croke Park: “I was especially speechless with Peter’s generosity in giving me his jersey after the game. It wasn’t expected but made the day even more special. Peter is a top class guy and quickly becoming a Tipperary legend and I will treasure the jersey forever.” 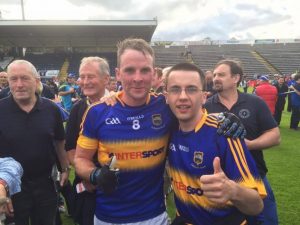 We are delighted to announce that Kevin will appear on the Anton Savage Show, along with Colm O Shaughnessy, this Wednesday, 30th November, at approximately 9:40am to discuss his special relationship with the team, autism and how the Tipperary senior footballers have helped him along the way.

We, in The Friends of Tipperary Football, know that Kevin will do a superb interview and the Premier county, as well as the senior footballers, will be will be proud of him and we wish him the very best of luck. 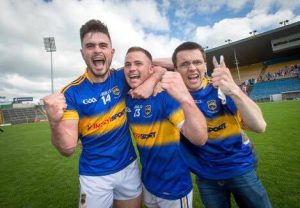 Here is the full interview Kevin did with Sports Joe:  https://www.sportsjoe.ie/gaa/amazing-fan-footage-and-the-classiest-gesture-from-tipperary-players-makes-the-story-even-better/89701